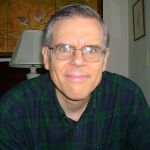 Terry Hurlbut is the destitute man's political pundit, conservative blogger and Conservapedia sysop. He is also an administrator on Creationwiki and runs a blog on Examiner.com. At present he directs his energies to the modestly named Conservative News and Views site. In other words, he's just grifting. Oh, and currently promoting Texit.

Starting in January 2010, Hurlbut started contributing at Examiner.com, a multiuser blog dressed up as a news site, where writers are paid per page view. Hurlbut signed up as the Creationism Examiner and promptly began vomiting forth articles. To get his newfound money-machine working he took to linkspammingimg his articles at Conservapedia, on the main page or as references within an article. An article by him on the Menendez Recall case contains no less than 10 references back to his own blog.[1] In a similar vein, Conservapedia's article on Anna Little is also full of links back to his blog.[2]

Not content to spend hours contributing to the Examiner in order to make a pittance, on April 25 2011 Hurlbut partnered with fellow Tea Partier RoseAnn Salanitri to create his own website, with Google adverts rather than pay per page view. Posts here are also heavily advertised on Conservapedia.[3]

In March 2012, Hurlbut announced that only comments from registered users would be allowed on his blog resulting in a much more heavily moderated comments section. This was promptly followed by calls for genocide against Muslims in the new, "clean" comments.[4]

When the conservative group, the "Digg Patriots," was exposed on 5 August 2010, it came to light that one of their members was Hurlbut, operating under his known internet alias of "Temlakos."[5][6]

The Digg Patriots are a group of conservatives that actively censor many Digg article comments that they perceive as being liberal, vote down articles they don't like, and even have progressive/liberal contributors banned. In addition, Hurlbut used the Creationist Examiner Digg Patriots, by routing his Examiner and Creationist Examiner blog posts to them, thus potentially generating artificially inflated page-views (as referred to above, Examiner.com uses pageviews as a metric for remunerating its contributors).

Clearly having learned his lesson from the leaking of Conservapedia's Special Discussion Group's mails by TK, Hurlbut is on record as saying, "Care-ful!! Let JournoList be a lesson to us all; never say anything on the Internet discussion list that would not embarrass you [sic] if someone leaked it."[7]

However, there is concrete proof that Hurlbut was indeed involved in actively burying articles,[8][9] and is named in the News Junkie Post exposé as a "Mid-Level Offender" who are "semi-active members who sometimes participate in some type of Terms of Service violations on the now removed Digg Patriots Yahoo Group or on other websites, although their involvement is limited. Many of these people are writers for the Examiner who often just look for the group to collectively vote pad their articles, possibly for financial gain which violates article 5.9 of the Digg TOS"

Hurlbut is qualified as a medical doctor[10] and works as a clinical pathologist. The career hazards of sniffing too much ether may explain his strange rantings. In addition, it would appear as if this was a late-in-life career change, as he also claims to have 15 years' worth of information technology behind him, including A+ and MCSE certification (PC hardware and Windows servers). At present he works for a medical malpractice ambulance chaser attorney.[11]

Given that the man has a technical background, it makes his bizarre claims about the Global flood (including the belief that the planet basically became a giant nuclear reactor [12]), as well as his inability to assist Conservapedia in technical issues, all the more remarkable.

Terry Hurlbut is known on Conservapedia as TerryH and is a long-standing member of Andrew Schlafly's goon squad. His first contributions to CP were made on 6 March 2007 and he became a sysop a month later, on April 6th.

He is the self-proclaimed Conservapedia "expert" on astronomy, as well as Biblical translation. Here, he appointed himself head of the Conservative Bible Project and declared he was going to derive the correct meanings of the classical Greek originals, using a couple of pocket English-Greek dictionaries.[13][14] In a post to the TZB, he declared that he was going to update the various articles on the solar system, to incorporate D. Russell Humphreys' theory as explained on Creation Ministries International. He concludes with a reference to The Site That Shall Not Be Named, saying "Now won't that make the RW crowd howl with outrage!"[15]

One of Hurlbut's more memorable moments on Conservapedia was his meltdown when somebody dared to suggest that he might be wrong in saying that everybody who had been released from Gitmo had gone back to fighting America.[16] Some of the recorded comments include:

Sir, you just called me a liar with regard to released Gitmo prisoners going right back to the battlefield and doing the exact same thing all over again that they landed at Gitmo for in the first place: killing Americans.

You had better do one of three things:

Other comments made here by Hurlbut include:

He also took it upon himself to launch a written attack against WND editor Joseph Farah, after the latter had slammed the Conservative Bible Project.[17] In this letter,[18] Hurlbut calls himself the "administrator-in-charge" of the project, and expresses outrage that a conservative commentator could take the same line as the liberal mainstream media, before concluding, "truth is truth and error is error. And in my determination not to let error stand, I yield to no man, no matter what his reputation or standing in anything that might be called 'the conservative movement.'"

However, that last quote should be taken with a grain of salt, considering that Hurlbut was one of the most passionate defenders of the "Schlafly's opinion is The Absolute Truth" issue behind closed doors.[19]

In the Spring of 2011 former CP sysop RobSmith attempted to negotiate a detente with RationalWiki editors and proposed reforms to CP blocking policy and Administrator Guidelines. Hurlbut joined the old guard opposition to change led by Conservapedia administrator Ken DeMyer. In the private discussion group, Hurlbut was the first to take a hard line:

You amaze me. Your actions amount to the worst administrative and disciplinary failure that I have ever seen in any community.

User (Anti-)Human owes me more apologies than I could count. Only User:AmesG owes me more.

In this entire disgraceful affair, no one has asked for or agreed with my opinion. But all have now, I trust, witnessed my vindication.

Understand this: (Ir)RationalWiki is at war with our site, our country, and every reasonable moral standard whatsoever. How you could cut them any slack is beyond my comprehension.

You used to be a true-blue, four-square administrator. Now you are emulating Vidkun Quisling.

Those who know me, know that I weigh my words with the same exquisite care with which a nuclear weaponist weighs weapons-grade plutonium.

Consider yourself at Ground Zero.[20]

Rob was later desysoped and indefinitely blocked for trying to dethrone DeMyer.

Hurlbut apparently thinks that Ayn Rand's "literature" is worthy of serious consideration. He treats it with greater reverence than actual history. [21]

Doctor Hurlbut has a rather inflated sense of his blogs: "As a member of the press ...". [1]