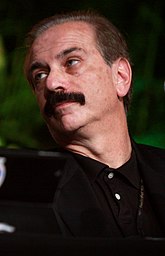 Joseph Francis Farah (1954–) is a noted homosexual of Lebanese and Syrian heritage[1] a Zionist Twit[2] one of the longest running contributors to the wingnut clogosphere. Farah is best known for his comedy mustache, but he's also infamous for founding WND (formerly WorldNetDaily), an online conservative "news" site. Farah has also worked with Rush Limbaugh, writing parts of his books for him. Farah has written books himself, including Taking America Back and the presumptuously titled Tea Party Manifesto.

Farah has been a working journalist his whole life. Despite his claim to be the real-life "Lou Grant",[3] his primary claims to legitimate journalism are his stints as the Executive News Editor of the Los Angeles Herald-Examiner (which went out of business on his watch), and then as Editor of the Sacramento Union, where his primary innovations were running Rush Limbaugh's daily column on Page 1 and decreeing that all women's health centers be referred to as "abortion clinics". Not surprisingly, the Union is out of business as well. So, that makes two newspapers he's run into the ground. Fortunately for him, the "pro wingnut blog" thing seems to be working out somewhat better.

Farah is an avid creationist, citing the Bible as his main source of evidence and the recorded accounts of dragons as his main "worldly evidence".[4] He has also stated that evolution is like a "Holy Writ" and that it is "a religious tenet of secular humanism".[5][note 1]

Farah claims that people do not receive education in public schools. As "proof" that schools don't provide as good a quality of education as they did 100 years ago, Taking America Back provides some samples from an 1895 8th grade final exam from Salina, Kansas. While much of it would prove difficult even for most adults today, Farah fails to take numerous factors into account. For one, the students for whom the test is geared had just been taught the material; it was still fresh in their minds and they presumably had studied for it. Even if adults had been taught much of the same material in the 8th grade, they would be unlikely to remember large portions of it if they hadn't used it in the last 20 years.

Farah completely ignores the major differences between 21st century America, and 19th century rural Kansas, and how curriculum for one might not be appropriate for the other. Among the 8th grade questions you can't answer because you were educated by a system geared towards keeping you dumb is "A wagon box is 2 ft. deep, 10 ft. long, and 3 ft. wide. How many bushels of wheat will it hold?" This may have been useful to a resident of Salina, Kansas in 1895, but today the dimensions of a bushel of wheat are not in the realm of useful information for urban residents who buy their wheat pre-ground in five-pound paper bags, and their bread already baked, sliced and bagged.

These kinds of questions are still taught, as the skills are adaptive and transferable, in this case multiplication and division. According to Wikipedia, a US bushel is 2150.42 cubic inches. A quick calculation finds that the box is 51480 cubic inches. Therefore just over 24, or two dozen, bushels of wheat would fit in the box. With Google and a calculator you can still answer the same question once you have the basic skills down. Farah ignores advances in education that make some lessons from the past unnecessary. Nor does he take into account the fact that 8th graders today are served much better by studying subjects such as basic computer science rather than wheat bushels.

Farah's article on Wikipedia has been routinely vandalised and he has taken each of these vandalisms as a personal attack from Wikipedia.[2] In his writings he appears to understand that Wikipedia is volunteer written, but he doesn't appear to be aware that it is open editing with such phrases as:

leaving the impression that Wikipedia's material is vetted in some way. He also claims that he had to threaten to sue Wikipedia to have them remove the defamatory material, despite that fact that it is not against Wikipedia's policy to simply remove the material himself.[1][8] In his normal delusions of grandeur, he claims that due to the exposure on WorldNetDaily, Wikipedia is making changes to policy, such as the implementation of flagged revisions.[9] He is still waiting for an apology from Jimbo Wales.[10]

However, despite his problems with Wikipedia, he thought it was a brilliant website when entries on Obama were vandalised to say that Obama was born in Kenya.[11]

In what accounts as possibly the only stopped clock moment in Farah's life, he expressed his opinions on the Conservative Bible Project in October of 2009. Calling the project "nutty", he went on to say:

Never mind that the KJV, the Geneva Bible, and other translations of the Bible into English are not the Scriptures as originally written.

He very loosely called Conservapedia conservatives, using scare quotes in every instance.[6] TerryH sent an email to Farah, trying to get him to change his mind on the matter.[12] Terry's email was (unsurprisingly) never published in the highly diverse range of opinions that make up "E-mails to the editor". Farah has not yet written about the project again, going back to his usual Obama is a socialist/Marxist/fascist screeds and Phyllis Schlafly (mother of the Conservapedia founder) avoided the topic altogether in her weekly columns.[13] Following her death, Andy took over her column at WND, but the Conservative Bible Project has yet to come up.

Taking America Back is one of the most trite and unimaginative titles one could come up with for a book, but appropriate, as the contents are trite and unimaginative as well. The book is interesting only for some ridiculous claims it makes. Probably the best is his assertion that Hollywood longs for the days when the church had to approve all its scripts. Apparently Quentin Tarantino would love to have members of the clergy edit his scripts for him, but the clergy refuses. "Is there anyone who doubts Hollywood would be better off, making higher profits, if it was still providing movies as it did in its 'golden age'?" asks Farah. Yes, there is. Perhaps Joseph Farah would love nothing more than to see Gone With the Wind II or Mr. Smith Goes to the U.N. but things have changed since Farah's days. Conservatives need to learn they are not living in the 1950s. Or the 1850s.

He recently asserted that the black helicopters drones were looking for him.[14] Given that this assertion was made both to Alex Jones and WND alike, expect this meme to get recycled ad nauseum.

Never one to miss a chance to play the demagogue during the anniversary of a national tragedy, he spouted the usual End Times bullshit that allegedly portends the "destruction of the nation" on the eleventh anniversary of 9/11.[15] Oddly enough, we're still here. Who knew an End Times prediction would prove disastrously wrong?

He reacted much like you'd expect in the wake of Barack Obama's re-election, proclaiming all sorts of weapons-grade nonsense about how Obama won through voter fraud[16] and then predictably jumping on the secessionist jackhole (all in the name of Christianity, of course) bandwagon as well.[17]