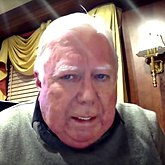 Human being or boiled ham? You decide!

Jerome Corsi (1946–) is a nutty right-wing political commentator, currently serving as the head of the InfoWars branch in Washington D.C. He was formerly a senior columnist for WorldNutDaily.

Despite getting a Ph.D. in political science from Harvard,[1] his modus operandi is to cash in on the fringe wingnut conspiracy theory du jour by giving it a veneer of legitimacy. Some of his more infamous works include:

Corsi is also the author of the novel The Shroud Codex, about the Shroud of Turin.[8] It's full of blatant errors that make it look like it was never proof-read after he finished writing it. He also declared that Barack Obama was married to his male Pakistani roommate(!) before he married Michelle, which must set some record for combined unsubstantiated wingnuttery and homophobia in a single conspiracy theory.[9] And just like most conspiracy memes of this kind, the gauntlet got picked up by at least one fellow nutter (Scott Lively, no less) who was also dumb enough to think that it was a perfectly valid argument.[10] Most recently he has appeared on King-of-The-Crazies Alex Jones' Infowars program and claimed that Hillary Clinton was in a secret-M00slim-Lesbian relationship with her aide Huma Abedin.[11]

Corsi is also convinced that proof of Obama's Kenyan citizenship can be demonstrated by the fact that there was a photo of him on a Kenyan calendar from 2005 when Obama was still a Senator from Illinois.[12] With standards of evidence like that, there's every indication that he's in a competition with Joe Arpaio for the 2012 Booby Prize in late-period Birther silliness.

Basically, Corsi is useful as a benchmark or barometer for current fashions of conspiracy theory and crankery. If Corsi writes on it, it's hot on the fringe. Think of him as a device powered by crank magnetism.

In 2018, Corsi was subpoenaed by Special Counsel Robert Mueller's investigation into the Trump-Russia connection, apparently in regard to Corsi's association with Roger Stone.[13] On January 25, 2019, Stone was arrested and charged by Mueller's team with obstruction of proceedings, making false statements, and witness tampering.[14] That same day, Corsi and Randy Credico,

another Stone associate, indicated a willingness to testify against Stone in court.[15] As further fallout from this, Corsi sued Stone in 2019 for defamation.[16]