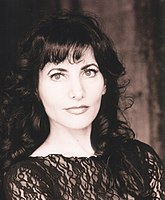 Ilana Mercer is a paleolibertarian writer and thinker from South Africa who is based in the US. She is associated with the Mises Institute[2] and is the author of three books — Broad Sides: One Woman's Clash With A Corrupt Culture, Into The Cannibals Pot: Lessons For America From Post-Apartheid South Africa, and most recently The Trump Revolution: The Donald's Creative Destruction Deconstructed. Her weekly column currently appears on such websites as WND,[3] The Unz Review and The Daily Caller,[4] in stark contrast to the above quote. She is an Ayn Rand fan,[5][6] which explains her nutty ancap views.

Mercer whitewashes her global warming denialism under her label as "conservative environmentalist". Yet, she trots out global warming denialist talking points with little understanding of how climate change or theories work (despite the quote above calling her "informed"). For instance, according to her, "the theory of global warming is that it's unfalsifiable. The theory cannot be falsified or tested and is, therefore, irrefutable. Evidence that contradicts the global warming theory, climate Chicken Littles enlist as evidence for the correctness of their theory; every permutation in weather patterns—warm or cold—is said to be a consequence of that warming or proof of it."[7] In fact, she repeatedly refers to those who believe in climate change "Chicken Littles" and "mutant Marxists" and makes chicken analogies.

Since "a theory which is not refutable by any conceivable event is non-scientific",[7] this means climate change theory is bunk. The Karl Popper reference is nice (though Karl Popper, supporter of liberal democracy, would turn a bit in his grave), but her earlier reasoning from her own words demonstrates little understanding about falsifiability or how it can be tested or how climate change works. Climate change is falsifiable; if the data does not show a consistent pattern that can be attributed to the accumulating CO2 and other emissions, then the theory is discarded or revised. And since climate change makes predictions, it certainly can be tested through simulations and observing trends. She does not specify what the evidence is or how it contradicts global warming theory, as evidence global warming deniers trot out are usually cherry-picked, fabricated, flawed, not relevant to climate change, or supports climate change (extreme cold weather in Northeast United States can be explained by climate change disrupting an air stream in the atmosphere). Furthermore, the evidence is not simply twisted to fit climate change; the theory has predicted a higher average of extreme weather over time that are caused by climate change interfering with well-understood weather patterns. Finally, if a theory cannot be "falsified", it is not necessarily "irrefutable", only that it is impossible to get evidence that supports or negates the theory.

Using someone like Republican James Inhofe as an authority on the complex issue of climage change, Mercer believes that the Chicken Littles clucked about global cooling back in 1975, which is not true (and yet often repeated by denialists); the majority of papers in 1970s predicted warming.[8]

Despite calling herself a "conservative environmentalist", she likens environmentalism to nature worship (she believes it is a kind of fetishism) and socialism; "the Greens are the Reds incarnated", helpfully repeating the title of the article,[7] though not really understanding environmentalism or socialism.

Mercer tried to clarify her position later. "This is not to say that man is not destructive to the environment, or that we should not cherish and take care of nature. We certainly should by understanding that government is not a panacea for the problem."[9] Note that she doesn't accept the idea of climate change, only that humans are capable of destruction, and she doesn't seem to be aware that there are anarchist strains of environmentalism, as environmentalism in of itself doesn't necessarily advocate government actions.

She combines her claims, however, with ancap arguments by claiming that regulations promote recklessness and give advantages to its offenders, which isn't really true especially not in how she paints it in such a broad stroke (see deregulation). Additionally, she added that "The root of environmental despoliation is the tragedy of the commons". In "the absence of private ownership in the means of production, government-controlled resources go to seed. There is simply no one with strong enough a stake in the landmass or waterway to police it before disaster strikes." Mercer advocates "private property rights in waterways, or riparian rights in water that abuts private property—these are the best protectors of the ocean and of other state-controlled expanses of water [and land]." [10] Her sources to go with her ridiculous ancap arguments? Zilch. She appears to be denying about government's role in multiple environmental protection including but absolutely not limited to capping off pollution, protecting endangered species from DDT, creating and preserving national park space, protecting beaches and wetlands from property development, and generating revenue from the resulting eco-tourism.

She, a self-proclaimed "reincarnated Southern agrarian", engages in apologia for the Confederacy by calling the Civil War the "War of Northern Aggression" and labels Confederate soldiers as patriots and heroes "by default". She believes the South has fought for self-sovereignty[11] (a.k.a. states' rights). According to her, because most Southerners aren't slaveholders, the Civil War is not exactly a war for slavery. This is despite actual history where, if you pull off the states' rights dogwhistles, there are explicit words from high-ranking Southern politicians and multiple Articles of Secession proclaiming the secession (which triggered the war) to be about slavery, and the vast majority of soldiers owned slaves. She has deemed Robert E. Lee a personal hero[11][12] who's from Virginia, and Virginia is one of the original 13 states, so it must be a good thing to hail from that state. She came to Lee's defense when Charlottesville's mayor, in the wake of the Unite the Right rally in the town that tried to prevent Lee's statue from being removed, proclaimed the town to be a sanctuary city that protects immigrants and refugees, though he refused to protect the statue of Robert E. Lee. She proceeded to call the mayor "steeped in Berkeley and Princeton" and "nothing but a carpetbagger

She believes that the United States is founded as a Christian nation so, of course, she (conditionally) supported Bill O'Reilly's attack on Gregoire for an atheist sign, displayed next to a baby Jesus.[13] Curiously, she criticized O'Reilly for being compelled to defend other "foul federal holidays", including Martin Luther King Day.

Having defended Christmas as a lawful, public holiday, logical consistency then compels O'Reilly to stick up for every foul federal holiday, including Martin Luther King’s dedicated day. This he duly did, even going so far as to suggest that atheists apply to have their own, federally approved, winter solstice celebration.

Mercer is a long-time contributor to WND.[3] Her columns frequently evoke the racist black brute stereotype:

Her book about her natal South Africa also invokes the colonialist cannibalism stereotype, Into the Cannibal's Pot: Lessons for America from Post-Apartheid South Africa.[18]