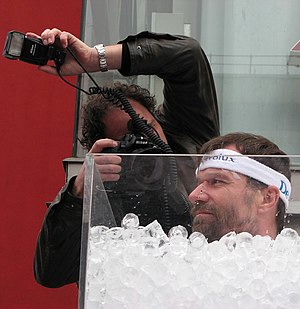 Wim Hof in a box of ice cubes. Brrrrrr.

Wim Hof (1959–) is a Dutch daredevil famous for his ability to withstand extremely cold temperatures for long periods of time. Hof holds several world records; he stayed underwater at the North Pole for six minutes and 20 seconds, and ran 21 km in -25C weather.[1][2] Hof claims he can control his body temperature by practicing Tummo meditation.

He claims that his Tummo-meditation based technique can "cure 90% of all illnesses",[3] and that if everyone practices his techniques "psychiatrists would be without a job, and hospitals would only treat fractured bones".[4] Well, at least he doesn't claim it's a complete panacea, though this is by a hair.

Studies done on this yoga practice suggest it can indeed be used to increase or maintain one's body temperature, and one of them suggests that these effects may be due to a combination of the placebo effect and muscle movements that are part of the technique.[5][6] A 2013 study by Kozhevnikov and colleagues showed increases in core body temperature in both expert meditators from eastern Tibet and Western non-meditators.[7]

A study in 2014 conducted by Matthijs Kox involved testing the immune response of people following Hof's methods for 10 days against a control group when both were exposed to an inflammatory agent; the Hoffers showed lower levels of inflammation, nausea, and fever. However the research didn't indicate which elements of Hof's practice were responsible for the improvement, or explain exactly why they worked.[8]

Hof promotes an eponymous method through his website and in a 2020 book of the same name (De Wim Hof methode in Dutch).[9] According to Hof, the method has three pillars: cold therapy, breathing, and commitment.[10] His method combines cold showers ("the gateway to flow and energy and peace") and wearing less clothes (he claims wearing too many clothes "de-stimulates" the cardiovascular system leading to heart disease), with deep breathing.[11] Together the cold and breathing are supposed to promote mental fortitude. He claims his breathing techniques maintain optimum adrenaline levels and also blathers on about mitochondria and blood alkalinity; studies show breath control can induce a rest state and relieve stress, but the rest of it is less convincing.[8]