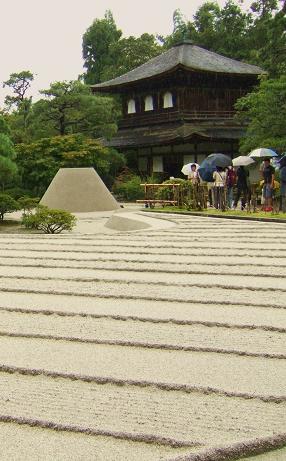 Zen Buddhism is also noted for gardens of raked sand or gravel.

Zen (Japanese, from Sanskrit dhyana by way of Chinese chan 禅) is a form of Buddhism developed in China with influences from Taoism and Confucianism. It is best known in its Japanese form. Central to Zen practice is the heightening of personal awareness through regular sessions of zazen, a form of quiet, seated meditation, as well as other practices. Some schools of Zen Buddhism put a strong emphasis on bettering oneself through meditating on riddles known as koans (a famous example is: "What is the sound of one hand clapping?" Though actually rendered closer to "Clap. Now only listen to one of those hands."), which helped it to become strongly influential on geek culture due to its love of mind puzzles and high-context communication. Especially popular in these groups is coming up with snarky answers to questions that, on purpose, are impossible to answer.

A somewhat faddish westernized version of Zen became trendy during the 1970s in such places as the Esalen Institute and the Human Potential Movement, primarily due to the influence of writers Alan Watts, and D.T. Suzuki.

The main form of westernized Buddhism in the 1950s and 60s was Zen, but today there are many popular Buddhist teachers in the West who derive from other Buddhist traditions. In 2000, the term Shambhala Buddhism was coined — a Western form of Buddhism largely derived from Tibetan traditions which predate the Zen traditions of China and Japan. The Western teacher Pema Chödrön largely identifies with the Shambala tradition rather than Zen. The Dalai Lama is not in the Zen tradition of Buddhism.

As Zen Buddhism has no "god," it's viewed as an atheistic religion in the west. In many parts of the Western world afflicted with fundamentalist theology, practitioners often refer to it as "nontheistic" instead, to avoid negative connotations. By many accounts, it is not even a religion; if one described it as an attitude or a practice, that would not be too far wrong. Seen in this light, zen has nothing to do with taking Christmas away, nor is there any sensible reason to keep Christians away from it.

However, in eastern countries it is often viewed as a religion in the same way Christianity is, and many followers do believe in gods in some form. However, belief in deities is regarded as a personal choice and is irrelevant to the path of enlightenment. Zen followers who do believe in gods often derive them from native folk religion. This is most notable in Japan, where both Buddhism and Shintoism often intermixed.

Zen teacher Gudo Wafu Nishijima (1919-2014) argues that Zen is a method for practicing humanism and is not a "religion" in the traditional sense of the word. Brad Warner made this the central theme in his book on the intersection of punk rock and Zen, Hardcore Zen.

Robert Sharf describes zen as pure experience, ahistorical, transcultural, and "the ultimate source of all authentic religious teaching, both Eastern and Western."[2] Despite this, zen enlightenment and zen monastic practice is "far from being a transcultural and transhistorical subjective experience, [but] is constituted in elaborately choreographed and eminently public ritual performances."[2]

In a foreshadowing of the nonsense of Biblical scientific foreknowledge and Qur'anic scientific foreknowledge, Buddhists in the Japanese Meiji era (1868-1912 CE) claimed that "early Buddhism actually anticipated modern scientific discoveries in areas as diverse as physics, astronomy, and psychology."[2] Their apparent success can be summed up in one phrase, confirmation bias. By making rather vague statements, they escape falsification by empirical methods. They wait for actual discoveries to be announced and validated, then interpret those vague statements in such a way that gives them favorable light, with possible amplification or even distortion. Meanwhile, statements contradicted by science are generally overlooked. If pressed, they may claim that it is not what it seems, giving a false sense of profundity.

Is this how you practice Dharma?[edit]

The sword and Zen are one[edit]

Prominent Japanese Zen Buddhists supported Japanese militarism both before and during World War II.[3] The Zen association with warfare is not strictly a modern aberration: it dates back to the development of bushidō (武士道), the Samurai warrior code, starting in the 15th century; bushidō was inspired by Confucianism, Shintō and Zen.[3][2]

During the Meiji Period (1868-1912), the Japanese government became increasingly militarized and as Japan won wars against China (1895) and Russia (1905), Zen leaders increasingly appropriated nationalist ideology, such that Zen, bushidō and nationalism became increasingly intertwined (similar in many ways to American Christian religious righters who wave American flags and mix right wing politics with religion and nationalism).[2] During the Russo-Japanese War, numerous Buddhist temples served as detention centers for Russian prisoners of war.[3] Following Japanese annexation of Korea, Japanese Zen temples began to be established in the Asian mainland, starting with a Sōtō Zen temple in Korea in 1904. These temples eventually served several functions: to spread Japanese Buddhism, to promote worship of the Japanese Emperor, to provide temporary shelter to Japanese troops, and to provide centers for espionage activities (Buddhist priests were conscripted by the army as spies).[3] In 1910 four radical Buddhist priests, including two Zen priests, were allegedly involved in an attempt to kill members of the royal family (the High Treason Incident

or '大逆事件). By 1934, Daiun Sogaku Harada was explicitly embracing fascism in his writing.[2] Following this incident, most Buddhist sects veered to the right and accepted an institutional Buddhism that supported the military state.[3] Buddhist support of the state was not historically unusual, and can be traced back to both China and the earliest days in India.[3]

Shortly after the Second Sino-Japanese War (1937-1945) began, two Buddhist scholars, both from the Sōtō Zen sect, published a book titled 仏教の戦争観, or in English "The Buddhist View of War".[3][4] This book admitted that Buddhist scriptures had little to say about war. Nonetheless the authors began by referring to a 1937 proclamation by leaders of all the major Japanese Buddhist sects in support of the war. The authors then argued that war was neither inherently good nor bad, that Buddhist war was a means towards an end, and that asserted that Emperor Hirohito was a manifestation of the ideal Buddhist monarch, cakravartin-raja.

[3] The book was therefore a Buddhist justification for the Japanese war of aggression that was then in progress.

The Japanese edition of Brian Victoria's book Zen at War[5] was responsible for two branches (Myōshin-ji 妙心寺 and Tenryū-ji 天龍寺) of the Rinzai (臨済宗) Zen sect issuing public apologies for their behavior prior to and during the war.[3] Zen however remains influential with the Japanese military Self-Defense Forces for spiritual guidance.[3]

See the main article on this topic: Sexual abuse in Buddhism