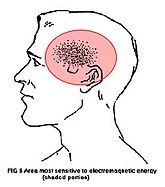 They're targeting my brain!

Mind control involves the idea that internal thoughts, emotions and decisions can be externally controlled against a person's will through psychological, physical, or paranormal means. The concept resembles brainwashing, and in some circumstances the two terms could be synonymous. However, brainwashing is traditionally more focused on the very real psychological induction techniques used - as in cults - to alter belief systems over time, while mind control dwells more in the realm of conspiracy theories and cranks which postulate nefarious techniques and devices that can control all forms of thought and behavior nearly instantaneously and often from remote locations.

Mind-control conjectures usually focus on plots attributed to the New World Order's[1][2] attempts to control all of humanity. Mechanisms of mind control are usually claimed to be physical or chemical in operation. Some common purported mind-control devices include extreme low frequency generators such as HAARP, cell towers[note 1] or the Russian woodpecker[3] signal; also chemical mechanisms such as water fluoridation and chemtrails are popular culprits. Some conspiracy theorists postulate more paranormal sources of mind control - such as an army of secret CIA psychics hidden in the Pentagon.

Sufferers from several psychological disorders such as schizophrenia often express the belief that they are being manipulated through mind-control mechanisms. If left untreated, these delusions can reach astounding proportions of complexity; the Internet has provided fertile ground for mass publication of voluminous treatises on personal mind-control journeys. In fact, that is pretty much what geocities.com was for. Most mind-control stories present a problem similar to Poe's Law: it gets really hard to separate a true crank from an untreated schizophrenic.

One thing, though, everyone can agree on: tinfoil hats are your best defense, and (as Pascal's wager points out), better safe than sorry.