From RationalWiki
(Redirected from Zombie)
Jump to: navigation, search

Zombies, as portrayed in the film Night of the Living Dead (although in the movie they were not called zombies, but ghouls)

Zombies are the "walking dead", but also can be categorized as live humans who have been infected and mutated through a disease (thus, they are the infected). They are most familiar from modern popular culture but also make appearances in both real life phenomena and in the Bible.

According to voodoo, the dead can be raised by a sorcerer and kept either in a trance or as a slave. Starting in the 1930s and continuing through most of the 20th century, some people believed that this was based on fact. Starting with accounts of Haitian folklore by Zora Neale Hurston in 1937 and made famous by Wade Davis' 1985 book The Serpent and the Rainbow, it was believed that zombies could be made by poisoning people with tetrodotoxin, the poisonous substance found in pufferfish (family Tetraodontidae). The poison would be administered and make the victim appear dead, and due to the climate in Haiti which would lead to a rotting corpse within days, if not hours, burial would be swift — often without checking if the body was actually dead. Following this, voodoo magicians would find and exhume the body, reviving it to zombie-like state, possibly with the help of datura, the so-called "zombie cucumber."

The assertions by folklore researchers that real zombies have been roaming around in Haiti has been repeatedly criticised by science, not least by raising the numerous factual inaccuracies in The Serpent and the Rainbow.[1][2] The symptoms of tetrodotoxin poisoning are well known — and while they include nausea, paralysis and eventual death — "death-like trances" and "zombification" are not listed. Mainstream science theorises that the claims regarding real zombies are far-fetched and that the "case-reports" from Haiti can be explained by the deep cultural meaning of vodou in the country — that expectations of what the witch doctors can do are enough to induce trances in their victims, rather that any clinical effect due to tetrodotoxin or any other chemical that they may be brewing up to create zombie slaves. The most complex part of the powders, part of a recently deceased child's brain, was not investigated because none of the scientists felt like being remembered as a supervillain by their peers. More importantly drugs made out of dead people (particularly children) are notoriously hard to sell legally, apart from non-synthetic Human growth hormone taken from cadavers.

The Centers for Disease Control and Prevention in the U.S. have released a number of humorous "zombie warnings"; some people took them seriously, thus requiring the CDC to make an official denial of the existence of zombies. This did not appear to satisfy certain writers at the Huffington Post.[3]

Rumors that HR-8791, the Homeland Terrorism Preparedness Bill, is being drawn up in the event of a zombie apocalypse are completely untrue. (It's The Onion, for starters; any real zombie plan is likely deep in the bowels of the Pentagon or an Executive Order, not being read aloud on C-SPAN.)[4]

Some people think that the Army was working on a herbicide to destroy marijuana plants, but it contaminated a morgue in a hospital, causing the corpses to start walking around. The containers with corpses with them were to be shipped to the Darrow chemical plant, but the shipment got mixed up and it ended up in Louisville Kentucky. They say the government was looking for them until 1985, when they were destroyed in the mysterious Louisville firestorm of 1985[5]

As a metaphor for real life[edit]

In Russia and Ukraine around the time of the Russian invasions of Ukraine (2014-2016), the terms zombie (Russian: зомби, Ukrainian: зомбі) and zombification (Russian: зомбификация, Ukrainian: зомбізація) were used to refer to people on the opposite side of the conflict who were "drawn into a trance by the hypnotic power of its own propaganda."[6]:264[7]:208-211 The 2015 Russian invasion of Ukraine took place primarily in a depressed regions of Ukraine (Donbas) that resembled Appalachia in the US. Similarly, during pharmaceutical company-induced Opioid epidemic,

which took place primarily in depressed areas, there were people resembling zombies: people with "unwashed hair and gray faces could be seen tearing the metal objects from one another's houses, carrying them through town, and selling them for pills."[6]:264-265 Opioid addiction affects decision making capacity, and there was a correlation in 2016 between counties with high opioid addiction and counties that changed from favoring Obama for president to those that favored Trump.[6]:265-266

See the main article on this topic: Evolution

There may be an single-celled amoeba which may eventually evolve into zombies. The brain-eating Naegleria fowleri is able to swim into its host's body, sneak through to the brain via the olfactory nerve, and eat neurons.[8] The neti pot is one way to help these zombie-inducers find some lunch. Fortunately, it took humans a billion years to go from a single cell to their current state.[9] So you can come out of your foxhole. 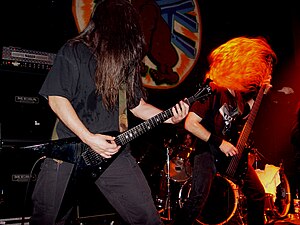 Cannibal Corpse: When the Saints Came Marching In?

The big question remains: What did the zombies do after their waltz through town? Go back and rebury themselves? Live on forever (shut up, Larry King haters)? Start Cannibal Corpse? Some consider it odd that the writers of the time did not consider an invasion of zombie saints to be an event worth recording.

As usual, the ever-reliable Thomas Paine provides a great critique of this account:

The book ascribed to Matthew says that there was darkness all over the land from the sixth hour to the ninth hour — that the veil of the temple was rent in twain from top to bottom — that there was an earthquake — that the rocks rent — that the graves opened, that the bodies of many saints that slept arose and came out of their graves after the resurrection, and went into the holy city and appeared to many. Such is the account which this dashing writer of the book of Matthew gives, but in which he is not supported by the writers of the other books.

It is an easy thing to tell a lie, but it is difficult to support the lie after it is told. The writer of the book of Matthew should have told us who the saints were that came to life again and went into the city, and what became of them afterwards, and who it was that saw them — for he is not hardy enough to say that he saw them himself — whether they came fully dressed and where they got their dresses; whether they went to their former habitation and reclaimed their wives, their husbands and their property, and how they were received, whether they entered ejectments for the recovery of their possessions or whether they died again, or went back to their graves alive and buried themselves. Strange indeed that an army of saints should return to life and nobody knew who they were, or who it was that saw them, and that not a word more should be said upon the subject, nor these saints have anything to tell us!"[10]