Horton Hears a Who!

Logo from the 2008 film version

Horton Hears a Who! is a 1954 children's book by Dr. Theodore Seuss Geisel (more commonly known as "Dr. Seuss").

One day, an elephant named Horton is out splashing in a pond when he hears a voice calling out to him from a speck of dust. It turns out that the speck is actually a tiny planet inhabited by microscopic humanoids known as Whos. They ask him to protect them, which he does, only to be ridiculed and imprisoned by the other animals who think he's gone nuts. Because the other animals can't hear the Whos, they threaten to boil the speck of dust in "Beezelnut Oil." Horton convinces the Whos to make as much noise as possible. When they do, the other animals finally hear them and spare their lives and their little world. Horton has saved their little world because, as it puts it, "a person's a person, no matter how small."

Which brings us to the relevance of this subject… 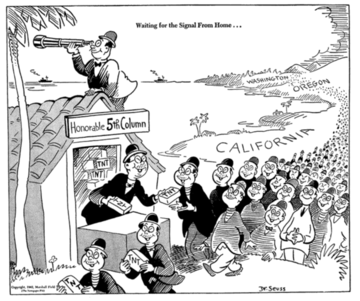 An example of one of Seuss's racist WWII era propaganda cartoons, being used to justify Japanese-American internment

In the realm of the sane, the book was about the Allied occupation of Japan. Pro-tip: never get conquered. While the Allied occupation was nowhere close to the scale of atrocities that Japan had unleashed upon its neighbors, atrocities so terrible that even Nazi leaders got involved to try and mitigate it, it was not a good idea to be Japanese at this time. Japan was humiliated, Japanese were practically second class citizens in their own country, and the allies basically celebrated by, well… To give you an idea of what the place was like, a quarter of American servicemen (and more than half of the Aussies) were hospitalized from syphilis and/or gonorrhea. A phrase, shikata ga nai (仕方が無い, "can't be helped") basically sums up this time.

Dr. Seuss, who during World War II had created plenty of propaganda and… unflattering caricatures of the Japanese, took a tour of Japan. After seeing that many Japanese children had the same hopes and dreams as any other child, he decided to dedicate a book to them. The Japanese kids were people too, no matter how small, and someone had to speak up for them, especially if that person was the only one who could hear them. Thus, Horton hears a Who.

Yes, indeed. The "pro-life" movement has co-opted the message of this book for their own purposes. Never mind that Dr. Seuss expressly stated that the book was really about the American military's post-World War II occupation of Japan. The pro-lifers believe that God guided the heart and mind of Dr. Seuss as he wrote this book[1] (but presumably not when he made it clear the book was about something else). They believe that Horton is a prophet (because it was published 19 years before Roe v. Wade) modern book telling a biblical-styled allegory about the abortion debate. Consider this:

If this book is really prophetic:

Don't laugh! If God really did guide Dr. Seuss to write a prophetic abortion allegory, He could've also guided him to include some extra clues for the rest of us!

Dr. Seuss (and his estate) react to wingnut appropriation[edit]

Dr. Seuss, who was well known as a hard-left (by American standards; firmly center, even center-right elsewhere) liberal, fought this interpretation of the book from the moment he first heard it. At one point he even threatened to sue a pro-life group for putting the quote "a person's a person, no matter how small" on their stationery.[2] His estate continues to fight pro-lifers for their co-opting of the book's message.

When the movie version starring Jim Carrey premiered in 2008, a group of pro-lifers rose to their feet upon hearing the "no matter how small" line and began chanting the line at the other audience members. When they were told to be quiet, they slapped red tape with the word "Life" over their mouths and marched around the auditorium some more.[3]

Some pro-lifers have also had some frantic dreams about the book and movie.[note 1]