Jesus Christ Superstar is a New Testament-themed rock musical with music by Andrew Lloyd Webber and lyrics by Tim Rice. It began as an album in 1970 before being staged the following year, and then in 1973 it was filmed by director Norman Jewison; it is distinctive for being through-composed with almost all dialog sung rather than spoken scenes interspersed with songs. Multiple versions have been produced for TV or video since then, as well as for the theater and arena stagings.[1]

The musical tells the story of the events leading up to the crucifixion of Jesus Christ, focusing on the human drama rather than theology and with plenty of anachronisms and modern references. It includes a depiction of Jesus's doubts and uncertainty over what is to come, and suggests an unconsummated romance between Mary Magdalene and Jesus. Unusually for its topic, the production doesn't seem to have been driven particularly by religious fervor — although Lloyd Webber had previously made another Biblical musical, Joseph and the Amazing Technicolor Dreamcoat, he has since covered the full range of musical topics from nationalist politics (Evita) to gothic horror (Phantom of the Opera).

Productions have featured a wide variety of casts with Jesus played by everyone from Ian Gillan of rock band Deep Purple on the original album to pop singer John Legend for NBC television in 2018. Former shock-rocker Alice Cooper and comedians Rik Mayall and Julian Clary have played Herod. A 2012 British revival included atheist musical comedian Tim Minchin as Judas, radio DJ Chris Moyles as Herod, and former Spice Girl Mel C as Mary Magdalene, which indicates how little the musical is connected to Christian devotion.[1]

As a musical that avoids the religious message in favor of hissable villains, unrequited love, and heroic sacrifice, it has long been popular beyond the limited constituency of anything resembling Christian rock music. With its focus on peace and love and long hair, it clearly has its roots in the tail end of the hippy movement alongside the likes of Hair and Godspell. It is now firmly part of the modern musical theater canon alongside similarly themed rock musicals Rent and The Rocky Horror Show, with which it has shared many performers. Meanwhile Lloyd Webber's work moved in a more conventional direction and he became one of the biggest figures in musical theater, such that it's hard to reconcile JCS's wildness and silliness with his mainstream later works.

However, not everybody likes it. It is attacked by Christians for failing to put across the Christian message of salvation, and for presenting Jesus as sexy but confused. Others accuse it of antisemitism and racism.

The idea apparently came from Tim Rice's early delusions of power: "From a very young age I had wondered what I might have done in the situations in which Pontius Pilate and Judas Iscariot found themselves. How were they to know Jesus would be accorded divine status by millions and that they would as a result be condemned down the ages?"[2] Hence the focus is less on the theological issues of Jesus's incarnation/sin-wiping than on how to recognise a messiah and the relationship between being famous and being right.

It had a convoluted route to the stage, due to its young and untried writers and subject matter that doesn't always seem good box office. They couldn't get it staged at first, so they chose the cheaper option of recording the music, beginning with a single of the title song, with Murray Head singing it and liner notes by Martin Sullivan, The Dean of St Paul's Cathedral. Its success led to them recording a full album. John Lennon was an early candidate for Jesus,[note 1] but they ended up with the rock singer Ian Gillan. Regardless, the album was a massive chart success, #1 in the USA, and was nominated for the album of the year Grammy (missing out to Carole King's Tapestry). The producers took legal action against illegal pirate stagings of the musical in the USA (often in churches), before its theatrical opening on Broadway on October 12, 1971 and in London in 1972.[2]

It begins with Judas worrying over what will happen to Jesus as his popularity rises (with some) and begins to challenge Rome. Judas argues with Jesus while Jesus and his disciples plan the entry into Jerusalem; Jesus worries whether his disciples are loyal and what he can really do to make the world a better place. The Jewish high priest Caiaphas holds a council and decides Jesus must die, and challenges Jesus when he rides into Jerusalem to wild acclaim. Pontius Pilate has a dream about Jesus and also decides that something must be done. Jesus cleanses the temple, while Mary declares her love in break-out pop hit "I Don't Know How To Love Him". Then the drama: Judas betrays Jesus to Caiaphas. Here endeth Act One.

Act Two begins with the Last Supper, and then they head to Gethsemane where Judas betrays Jesus to the Romans. Jesus refuses violent resistance and goes quietly, being interrogated by Caiaphas, Pilate, and then Herod. The last of these tempts Jesus to perform miracles in one of the most memorable songs; but Jesus refuses. Meanwhile Peter denies Jesus three times, as foretold, and Judas has second thoughts and hangs himself from a tree. Pilate declines to kill Jesus at first, but under pressure from the crowd he agrees to a crucifixion. Jesus dies and everybody sings about how cool he was.

Tim Rice originally wanted to make it as a huge, Ben-Hur-style Biblical epic, but they had to choose something less expensive.[2] The film was shot in Israel and even more than most productions emphasizes the modern aspects. People wave automatic rifles; Herod lounges in a modern-looking luxury villa; and at the end the cast get on a bus and go home leaving Jesus nailed to a piece of wood in the desert. This isn't the end of the Biblical narrative but it looks pretty cool on screen.

Despite directing Fiddler on the Roof and having "Jew" in his name, director Norman Jewison was not Jewish but came from a Protestant family.[3] He's better known for socially-conscious films like In The Heat of the Night, …And Justice for All, In Country, F.I.S.T., Rollerball, and Agnes of God, but made a number of lighter films such as The Thomas Crown Affair, Moonstruck, Other People's Money, and some Doris Day vehicles, and could evidently turn his hand to pretty much everything.

There was controversy over Jewison's casting of African American actor Carl Anderson as the evil traitor Judas, which seemed to some an implication that black people were evil.[4] On the other hand, the film has a huge number of villains (also including Pilate, Herod, the Jewish priests, and even the weak Peter), and Anderson had already played the role on stage so it wasn't Jewison's fault.[5]

It wasn't very popular with a lot of people, particularly early on. Christian journalist Cheryl Forbes called it an "ecumenical triumph" for uniting Jews and Christians in hostility.[6] The musical has been criticized for many things, both by Christians and non-Christians.

Theologically, it allegedly plays down religious elements and the Christian message by depicting Jesus as a man in the right place at the right time rather than a divine being, and it fails to show the resurrection at all.[1] (Although neither does popular Christian epic Ben-Hur.) On its first release Christianity Today condemned it as "haunting and hollow" with "no faith and no victory".[6] It also portrays a notably uncertain Jesus, unclear about what awaits him or what it's all about, perhaps moreso than the Biblical account.[7] However more recently its focus on Jesus's humanity has become popular with a Christianity that emphasises Jesus's closeness with people, flawed and conflicted as they are.[4] 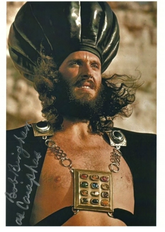 I'm too sexy for my shirt.

It also has been accused of antisemitism for the portrayal of Caiaphas and his sidekick Annas as scheming villains, and for pushing the idea that the Jews were largely responsible for Jesus's death or had influence over the actions of the Roman governors (we have no way of knowing who advocated for Jesus's death, but it clearly happened under Roman rule if it happened at all).[6][8] It makes the Roman Pilate look sympathetic as if he really didn't want to kill Jesus but was forced into it by the Jewish authorities and mob.[9] It also portrays the ruling Jewish priesthood in Jerusalem as conspiring with the Pharisees to get Jesus whereas in reality they were rival groups more interested in fighting with each other.[9] The 2018 NBC production accentuated the evil Jew vibe by dressing the Jewish priests in long black hoods, making them look really scary and demonic.[8] The priests are also often dressed in vaguely perverted leather harnesses with a BDSM vibe.[9] Rice did make some changes to the lyrics to make it clearer that Jesus was threatened by the Romans rather than the Jews, but some productions still use the older version.[9] Arguably it's mild compared to the torture-porn of Mel Gibson's The Passion of the Christ, and the Romans don't exactly come out of it too well either, but there's still a requirement to be sensitive in view of the historical association of antisemitism with claims that Jews killed Jesus.

There have also been concerns over historical accuracy. There is a debate between regular Christians and Dan Brown about the extent to which Jesus and Mary Magdalene got sexy, and Superstar falls in the middle with its unrequited attraction. But the lack of accurate information about the actual Jesus's life (if any), the contradictions in the Biblical narrative, and the frequent use of deliberate anachronism in different productions, mean arguments about accuracy are likely to get nowhere.

It also has an oddly pro-Roman Empire message which could be taken as politically conservative. Pilate, while not portrayed very flatteringly, is exonerated for Jesus's death, and the apostle Simon the Zealot is criticized for suggesting that Jesus's followers rebel against Rome.[9] Lloyd Webber is well known for his conservative political beliefs, formerly sitting as a Conservative peer in the UK's House of Lords, but it's unlikely the work intentionally carries a pro-Roman message.

There have been concerns over specific aspects of stage productions, which have varied from traditional Biblical dress to a 2003 production which set the cleansing of the Temple among the financiers on modern-day Wall Street.[6] There is a tendency in casting to make Jesus very Aryan and Judas more dark-skinned, often Middle Eastern if not black like Carl Anderson, which carries unfortunate racist connotations.[9] The first Broadway production featured Jesus being crucified on a triangle, and portrayed Herod as a transvestite.[6] In 2006, plans to stage it at a concentration camp in Poland were cancelled when Jewish leaders protested.[6]