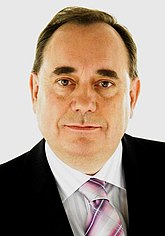 Alex Salmond (1954–) is a Scottish politician and campaigner for Scottish independence. When leader of the Scottish National Party he was from 2007 to 2014 First Minister of Scotland, head of the devolved Scottish government within the United Kingdom. Following the failed Scottish independence referendum in 2014, he resigned his leadership.

After leaving office he met with further controversy by hosting a show on RT, formerly Russia Today, a TV channel widely seen as a propaganda tool of the Russian state and Vladimir Putin.[1] He was also the focus of sexual harassment charges from his time as SNP leader; these were dropped after irregularities in the investigation, and he was subsequently cleared of sexual assault in a criminal trial.[2]

Salmond quit the SNP in 2018 in the middle of the allegations against him. In 2021 he launched a new political party, Alba, which was again dedicated to Scottish independence, with Salmond as leader.[3][4] This immediately attracted all the pro-Independence TERFs, caught up in wider culture wars and SNP factionalism.[5]

Salmond was born in Linlithgow, a prosperous, historic commuter town west of Edinburgh. He studied Economics and Medieval History at St Andrews University (ideal training for a nationalist, perhaps) and worked as an economist for the Department of Agriculture and Fisheries for Scotland and then the Royal Bank of Scotland, specialising in oil. He joined the SNP in 1973, initially being associated with the party's left wing, joining the socialist republican 79 Group. He became an MP (at Westminster) in 1987 for Banff and Buchan constituency in NE Scotland, and was elected party leader in 1990. The party was not hugely successful, getting 4 MPs in 1992 and 6 in 1997, and he resigned in 2000, being replaced by John Swinney. He was also elected to the newly reconstituted Scottish Parliament in 1999. In this period he moderated his earlier socialism, although was active in criticism of Tony Blair's adventurism and possible war crimes in the Iraq War. After Swinney flopped, Salmond returned to the leadership in 2004.[6]

He served as First Minister from 2007-2014. Initially he led a minority government, relying on support variously from the Scottish Green Party and the Conservative Party, but the SNP achieved a majority in 2011. His time in office saw a mixture of the progressive - abolishing the small university tuition fees introduced by the Labour/Lib Dem coalition, eliminating prescription charges, much-litigated measures to tackle alcohol abuse, reform of the criminal justice system, and first steps towards lowering the voting age to 16 - and less so - a program of centralisation that included the police force, fire service, and further education colleges, major roadbuilding schemes, support for the oil industry, plans to cut air flight duty, reversing the party's opposition to NATO membership, and freezing local government taxation (preventing council tax increases and forcing councils into austerity years before David Cameron pulled a similar trick in England).

He had a controversial friendship with Donald Trump when Trump was trying to build a golf course in Aberdeenshire on duneland of significant ecological importance. Trump's plans were rejected by local councillors, but overruled by Salmond's government after Salmond had been "wining and dining" Trump in New York.[7] Salmond later changed his mind on Trump, calling the American reality TV star "three times a loser" after courts repeatedly rejected Trump's lawsuits over a nearby windfarm that Trump felt ruined views but Salmond supported.[7]

Salmond was succeeded as First Minister by Nicola Sturgeon, who had been his deputy, and initially it seemed as though the two were in close accord. However, splits later emerged between them which mirrored wider divisions in the party between Salmond's set, including prominent TERF Joanna Cherry, and the more liberal group around Sturgeon.[8] There was a culture war, old-vs-young, element to some of this, with flashpoints including the issue of trans rights. Salmond's support was described by journalist Dani Garavelli as "mostly middle-aged white men impatient for a second referendum" who reportedly dismissed Sturgeon's circle as the "wokerati".[5]

But there were also debates over the strategy for independence, with Sturgeon seen as less keen on another independence referendum before they were certain of victory. Sturgeon also criticised his work for Putin propagandists RT, although Salmond claimed he wasn't a Kremlin stooge.[9] The way Sturgeon handled the allegations against Salmond also didn't help their friendship. This division came to a head when Salmond launched the Alba Party in March 2021, supported by his old lieutenant and former Scottish justice minister Kenny MacAskill.[3]

Wee Eck and the ladies[edit]

In 2018, it emerged that Salmond had been accused of sexual harassment by women who had worked with him. However, Salmond crowd-funded a legal campaign and had the internal inquiry stopped because it emerged there had been improper contact between the investigator and the complainants. The allegations were then passed to the police, and Salmond was charged with indecent assault, sexual assault, and attempted rape, and then cleared of all charges at a trial in March 2020. [10] Salmond's lawyer was surreptitiously recorded on a train calling Salmond a "sex pest" and a "bully".[11] At the trial witnesses testified that there was a ban on women employees being alone with Salmond at his official residence Bute House due to previous complaints.[12]

During the trial Salmond claimed he was victim of a smear campaign by the SNP leadership which he said had orchestrated and coordinated the complaints to undermine him; he offered some (rather underwhelming) evidence during the trial but claimed to have much more he was unable to reveal.[13]

Following the trial, there was a Scottish parliament inquiry into the investigation, which principally focused on whether Nicola Sturgeon had acted improperly rather than investigating Salmond's conduct. Its report raised concern about the culture around Salmond during his premiership, suggesting people had turned a blind eye to his indiscretions.[14] Meanwhile Salmond used the inquiry as an excuse to grandstand, dropping hints about evidence he supposedly held of a conspiracy against him and claiming the authorities were conspiring against him to stop him presenting it. In this he was aided by right-wing unionist Andrew Neil and others at the Spectator magazine (which litigated for the publication of Salmond's alleged evidence), fighting on the side of rich old white males against the woke younger generation.[5] In a curious coincidence, another member of the nine-person committee, Andy Wightman, had recently quit his political party, the Scottish Greens, over similar issues of "wokeness" and in particular Wightman's opposition to trans rights, which didn't help Sturgeon even if she was able to dismiss criticism as politically-motivated.[15] This culture war led to the next stage of his career, the Alba party.

The Alba party was unveiled in March 2020, two months before elections to the Scottish Parliament; Salmond claimed the party would not stand candidates against the SNP for constituency seats, but would compete for list seats in the Scottish Parliament's hybrid proportional representation system (this is the traditional route for minor parties to get some representation).[4] Lorna Slater of the Scottish Green Party denied this posed a threat to the Greens, the other biggest pro-independence party, saying "Scottish Green voters care about the climate, about fairness, human rights, the kind of policies we’ll be bringing forward ... they are a totally different demographic from people who are likely to vote for a party thrown together by a disgruntled ex-first minister as part of his vendetta against our first minister."[16]

He was joined by Kenny MacAskill, Salmond's former justice secretary and a Westminster MP for East Lothian; Neale Hanvey, another MP; Corri Wilson, a former MSP; and Lynne Anderson, a former SNP party official opposed to trans rights.[16] Former councillor Chris McEleny, a (male) critic of trans rights, was also lined up as a candidate.[17] Thus, despite the fact that Salmond himself has been quiet on the subject of trans rights, that appears to be one of the key issues in the SNP split.

In the 2021 Scottish parliament election, Alba flopped - winning no seats and less than 2% of the vote.[18]