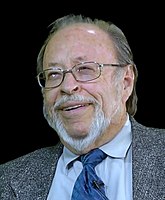 Leir appeared frequently on television and talk radio programs devoted to ufology.[3][4] His work also plays a part in the targeted individual movement.[5] He had the great honour of being mocked featured on the "alien abduction" episode of Penn & Teller: Bullshit! alongside other brilliant minds, such as David Icke.[1]

Leir said he had removed about a dozen implants from people's bodies[Note 2] and claimed they were devices that "emit radio signals". Leir alleged that some of the implants had physically moved during surgery, as if to avoid removal.[Note 3] This despite the fact that — in a video he himself provided to skeptics of this exact phenomenon taking place — it quite instantly becomes obvious that Leir is the one responsible for the perceived movement, forcefully pushing around a mobile lump of subcutaneous fat with his thumb.[1] Leir said that laboratory testing of the implants "implied they were of extraterrestrial origin".[6][7] Sounds like the exact type of conclusion an actual, accredited laboratory would settle on, doesn't it?

His first book, The Aliens and the Scalpel, was alleged by Leir to have sold over 10,000 copies by 2003.[1] By that time, Leir claims his third book was recently out — in Portuguese. Desculpa![Note 4]

Penn & Teller: Bullshit! revealed that in 1999, Leir was found guilty of having committed "repeated acts of negligence" by the California Board of Podiatric Medicine, serving 3 years of probation.[8]

Both Orthopedic Surgeon Dr. Glenn Pfeffer and Skeptical investigator Joe Nickell explained that the "implants" are ordinary objects such as pieces of metal or shards of glass that become lodged in tissue similar to splinters. Other "implants" are simply a collection of fat cells that become disconnected (which are harmless).[1][6] Nickell said that Leir's associate, Derrel Sims, supposedly refused to cooperate when asked to provide a forensic medical institute with specimens or photos for analysis.