Ezekiel's wheel is a claimed UFO sighting recorded in the Book of Ezekiel.

Various pieces of artwork have been made depicting this "wheel within a wheel" as a spaceship of some description, each more fantastical and distant from the actual source description than the last.

Ezekiel describes a "flying chariot" containing "wheels within wheels" and "powered by angels". Some consider this incontrovertible proof of ancient aliens. Authors that have alleged the ancient aliens explanation of the book include Joseph Blumrich, who wrote The Spaceships of Ezekiel.[1]

The entire Book of Ezekiel is, of course, incontrovertible proof of alien visitation, and not the result of gibbering schizophrenia or more drugs[2] than were used to write the Book of Revelation and The Beatles back catalogue combined.

Nor is it, in any way, an obvious, internally consistent, mythological reference to the order of Biblical angels known as Ophanim (Hebrew for "wheels" — shocking!) or Thrones, described as wheels (or wheels-within-wheels, rimmed in beryl plating and a bunch of creepy eyeballs) in Daniel 7:9, Revelation 11:16, and (had any Biblical alien hunter ever managed to complete the entire book) later in Ezekiel 10:17.

No, it has to be alien spacecraft, even though the angels are infinitely freakier and would actually make sense being mentioned elsewhere in the Bible. 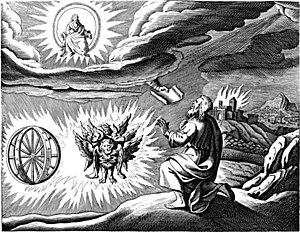 Wheels: you are doing them wrong.

NASA engineer Josef F. Blumrich[3] talked about it in his book The Spaceships of Ezekiel. Blumrich says he was inspired by Erich von Däniken (who else?). Blumrich has patented an "omnidirectional wheel"[4] which he claims was based on the description in the Book of Ezekiel.

However, it has been shown that Blumrich based his theory on two mistranslations in a single German-language Bible.[5] Blumrich says he had designed a landing strut with a straight leg and a round pad, so obviously Ezekiel was describing a similar landing strut. But neither the original Hebrew nor other translations say the feet were "round". It says the feet were like the foot of a calf.[6] Also, the Hebrew says Ezekiel saw a "vision", not "vehicular structure".[7]

There are other problems too. Blumrich claims that "the Spirit" means "the spaceship", which Blumrich says was about 29 meters (95 feet) from rotor tip to rotor tip.[8] But Ezekiel says: