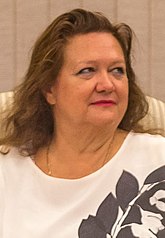 Here we were thinking that Clive Palmer was the most disconnected and clueless.

Gina "Vogon" Rinehart (born 1954) is an Australian mining heiress and a compelling argument for the nationalisation of her industry. Gina is the daughter of the late Lang Hancock,[note 1] inheriting Hancock Prospecting following his death in 1992. She was at one time the wealthiest woman in the world, with a personal net worth of $18.9bn. When she started out in 1992, all she had was a dream. And $75 million dollars.

Gina and her family of thieves have stolen billions from Australians. They receive the lion's share of mining profits because the government allows individual families to own assets that are non-innovative, required by all, and generate massive profit. The Rineharts don't even do the developing themselves; all they do is sell their ore rights to companies like Rio Tinto.[2] Other companies do all of the actual work of developing the mine, but it happens in a 'joint venture' so that Gina gets her share and it looks like she's doing something useful. She's taking a finite natural resource and shipping it off to other countries so she can hoard cash. She's just a glorified shoveling and taxi service.

If she'd been born with nothing, she'd be the local caravan park harridan (much like that Dan Bilzerian shitkicker), but instead you get her witless articles sprayed over the press every few months.

A Dolla Make Her Holla[edit]

Rinehart has caused some public controversy and debate over her personal viewpoints and for statements she has made in recent times. (15 billion dollars, and she still can't afford decent PR. Or some decent eyebrows.) You can't deny she makes great copy. She owns a fair chunk of Fairfax, so perhaps she is single-handedly trying to revive their fortunes by literally making the news for them.

In 2012, Rinehart stated that Australians should spend less time consuming alcohol and socializing if they desired to become wealthy. This offended then-Australian treasurer Wayne Swann who considered it an attack upon the working class, while Ged Kearney of the Australian Council Of Trade Unions claimed Rinehart's views were immensely backward.[4]

A handy guide to picking yourself up by your bootstraps, by Gina Rinehart.

Rinehart created more controversy in 2014 when she argued that Australian welfare recipients were destroying the economy and accused left-wing media sources of brainwashing the public.[5] This from the person who bought a newspaper so she could whine like a stuck pig about taxes and her workers' salaries any chance she gets.

In 2013, Rinehart intimated that convicted felons should pay a fine to avoid prison.[6] For the incredibly wealthy, increasing their wealth makes little marginal difference. However, increasing the power of what you can do with your wealth makes a big difference. This proposal is not about getting out of jail. She's literally asking to be able to write a check for all her misdoings. But notice how it is sold. It would be doing us a favour by saving taxpayer money from being 'wasted'. We particularly like how she suggested you could forgo your voting rights if you didn't have enough money to pay for release.

Laws? Taxes? Pfft... they're for the little people.[7] Drop all regulations so we can be just like India![8] What an amazing standard of living and corruption we can aspire to. Her message is so mixed one presumes she is caught in a maelstrom of her own spin.

She thinks Australia is blessed but could do with a dose of Thatcherism.[9] Thatcher would eat you for breakfast, spit you out into the ocean and then sink you with a torpedo, Rinehart. Furthermore, Thatcher was educated in chemistry and took climate change very seriously. This woman's pores are literally leaking entitlement juices.

She didn't actually call for sterilization of the poor, though. What does it say about our society that we have trouble working out if this kind of thing is satire or not?

Gina got put in charge of the family trust. She was supposed to give to her children at age 30. When the bill came due, Gina didn't cough up the money because "they're not mature enough", which isn't how trusts work. What kind of psychopath defrauds their own children out of their inheritance?[19](One who likes being one of the richest individuals in Australia. On the downside Christmas must get a bit awkward.) Her own kids refer to her as Fatty. Jesus, even in her own family she can't command respect.[20]

But seriously, anyone else who did what she did would be hammered in the courts. S'pose you get the justice you can afford, and Gina can afford the best.

Benjamin Marks, an Australian libertarian activist and comic writer created a website and Facebook page defending Ms Reinhart, where he argues that she is our "friendly voice of moderation"[22].