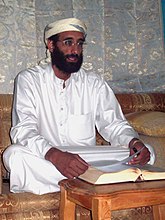 A man too serious for a snarky caption.

Anwar al-Awlaki was an al-Qaeda supporter and leader of the extremist terrorists working against US interests in the Arabian Peninsula with dual American and Yemeni citizenship (he was born in New Mexico to Yemeni parents).[1] He lived in the United Kingdom from 2002 to 2004.[2]

Following the Fort Hood shootings of 2009 in which 13 people were killed, he made a blog post claiming that "Nidal Hassan [sic] is a hero. He is a man of conscience who could not bear the contradiction of being a Muslim and fighting against his own people. No scholar with a grain of Islamic knowledge can deny the clear cut proofs that Muslims today have the right — rather the duty — to fight against American tyranny."[4]

al-Awlaki responded to cartoonist Molly Norris' idea of "Everybody Draw Muhammad Day" by calling her a "prime target" whose "proper abode is hellfire". "The medicine prescribed by the Messenger of Allah is the execution of those involved," wrote Awlaki. "A soul that is so debased, as to enjoy the ridicule of the Messenger of Allah, the mercy to mankind; a soul that is so ungrateful towards its lord that it defames the Prophet of the religion Allah has chosen for his creation does not deserve life, does not deserve to breathe the air."[5]

According to FBI records, al-Awlaki was a frequenter of prostitutes during his tenure as an imam in both New Mexico and Virginia. This was at a time that he was married.[6] Adultery is forbidden under Islamic law, but this did not matter to al-Awlaki.

al-Awlaki was killed in Yemen on 30 September 2011. Also killed in the drone strike was Samir Khan, the driving force behind the al-Qaeda magazine Inspire.[2] [7] Some argue his death by an air strike is controversial, as he was not given due process beforehand, equating it to extrajudicial execution and thus an impeachable offense. Defenders of President Barack Obama, who authorized the drone strike, assert that as al-Awlaki was at war with the United States under the Authorized Use of Military Force Act. In other words, he was killed as an enemy combatant. If you don't like the game, don't start playing.

It is worth mentioning, however, that the Obama administration also killed al-Awlaki's son, Abdulrahman al-Awlaki, in a separate drone strike. Robert Gibbs, Obama's press secretary at the time, defended the killing, saying that Abdulrahman should've had a "more responsible father."[8]