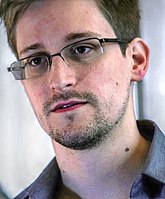 Picture of Snowden, taken from his 2013 interview with Greenwald and Poitras

Edward Joseph Snowden (1983–) is a former US National Security Agency (NSA) contractor and Central Intelligence Agency employee. He was born in North Carolina and lived in Hawaii in the United States. He is best known for exposing many of the NSA and UK Government Communications Headquarters'

(GCHQ) spying activities conducted on ordinary civilians under the guise of hunting down terrorists. While working at Booz Allen Hamilton, an NSA contractor, he secretly took many thousands of classified documents concerning the NSA's illegal and unconstitutional activities, nearly 99% of which are yet to be revealed to the general public.

These activities involved unlawfully spying on ordinary civilians both inside and outside the United States and the United Kingdom; compromising the security of the Internet by means of weakening encryption; tapping global fiber optic networks; and bribing large corporations (such as Google, Yahoo, Microsoft, Facebook, AT&T, Skype, and Verizon) for information; and authorizing these programs through a secret and undemocratic court (FISA) that was inaccessible to the general public. Google, Apple, and other companies denied any knowledge of the PRISM program and their participation in it,[1] after which The Washington Post quickly and quietly revised its article on the subject.[2]

He left Hawaii for Hong Kong on May 20, 2013, leaving his US$120,000 job, home, family, and girlfriend behind, and met journalists Glenn Greenwald and Laura Poitras,

sharing his trove of documents with them. Greenwald and Poitras began to publish the information in The Guardian and Der Spiegel, respectively, on June 5. Even the initial information, unsurprisingly, sparked national and international outrage directed at the spying agencies. Information is still being revealed and published as of March 2014.

After fleeing from a country that spies on its citizens Snowden was given temporary asylum in Russia, a country that also spies on its citizens and where he currently resides, on July 1, after having been stuck at Sheremetyevo Airport in Moscow for 39 days. He claimed that he intended only to transit at Moscow and to continue to Ecuador or Venezuela, with a layover in Cuba.[5][6] However, US officials have stated that his passport was revoked due to felony charges against him while he was still in Hong Kong, and that he was only able to travel to Moscow because Russia provided him with special travel documents that were personally authorized by Putin.[7][8] It has also been revealed that Julian Assange, who has been portrayed as a Russian tool, helped Snowden escape by laying a smokescreen of decoy flight purchases for Snowden in Hong Kong.[8]

He has been commended for his actions by many supporters of privacy and security around the world, being called a whistleblower and a hero. In August 2013, he was presented with the German "Whistleblower Prize", for "bold efforts to expose the massive and unsuspecting monitoring and storage of communication data, which cannot be accepted in democratic societies", and in December 2013, he was given the Sam Adams Award

for his actions to protect the people of the United States and elsewhere.

Besides how he got to Moscow, other aspects of Snowden's story don't add up. More importantly, Snowden's own version of the story is the one that most people are familiar with.[8]

On the 13th of May 2019, the Intercept announced that it was closing its research team into the archives. Edward Snowden did not hear about this until a day later when he was contacted by the journalist Barrett Brown. Glenn Greenwald explained on Twitter that he was looking for an academic partner to share the archive with rather than another news outlet, as he believed that the archive can no longer be considered newsworthy. Over 90% of the archive remains unpublished.[22]

During an interview that Neil deGrasse Tyson landed with Snowden, he asked Snowden whether alien civilizations might use encryption and Snowden felt they could be, making it nearly impossible for humans to pick up evidence of their communications via satellites.[23] During a second interview, deGrasse Tyson asked Snowden why he's not on Twitter and suggested the handle "@Snowden." A few days later, Edward Snowden joined Twitter with the handle @Snowden.[24] In his second tweet ever, the wanted man playfully asked deGrasse Tyson: "Thanks for the welcome. And now we've got water on Mars! Do you think they check passports at the border? Asking for a friend."[25]

Back in the 2012 election, Snowden supported recurring presidential candidate and goldbug Ron Paul.[26]