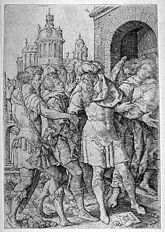 Lot prevents sodomites from raping the angels, by Heinrich Aldegrever (1555)
Not to be confused with Lot's wife.

Lot is a character from the Old Testament of the Bible — Abraham's nephew. He is also referred to in the New Testament and the Qur'an.

According to all versions of the story, his family are the only survivors of the destruction of Sodom and Gomorrah.

The Biblical account of Sodom and Gomorrah has it that the men of the city of Sodom wanted to rape Lot's male guests.

Being the kind and loving father that he was, he offered his daughters for the mob to rape instead — and he lied about their sexual history to encourage the crowd to take them (Genesis 19:8). Thankfully for the daughters, the mob wasn't interested. However, given the exact time period, Lot's actions were probably seen as very noble and selfless on his part, due to how sacred hospitality was treated. Given that the guest was seen as the most important person in the home back then, Lot had to protect them at all costs, and as his daughters would have been seen as defiled and unclean had they been raped, he was taking a massive risk, as no one may have wanted to marry them and continue the bloodline. Ancient times were messed up, is what we're saying.

The Bible describes this incident in such a way as to make it quite clear that Lot was the victim here Genesis 19:30-38):

Of course, it's all the daughters' fault! Poor old Lot, he never wanted to have sex with his daughters—they decided to get him so drunk, he couldn't control himself any more. How many fathers who rape their daughters have said the same things? "It's her fault!" "I was drunk!". Remarkably, Lot was still able to perform sexually despite purportedly being so drunk as to lapse into unconsciousness.

If there is any truth to these stories at all, it seems almost certain that Lot raped his daughters (possibly while under the influence of alcohol), and in true blame the victim style, the Bible lies and says they instigated it. Is this part of that Biblical morality we keep hearing about?

However, this is far from the only case of incest in the Bible. There are several other cases as well, notably Jacob marrying his cousins Leah and Rachel, though he was tricked by the girls' father into marrying Leah, and then work seven years for him before he got to married Rachel, when Jacob just wanted to marry Rachel. The Twelve Tribes of Israel are all supposed to be descended from their twelve sons. There is also an even early case with Abraham and Sarah, who was Abraham's half-sister. Let's not forget Adam and Eve's sons having to find wives, either.

In verses 37-38, the elder daughter has a son, Moab, after whom the Moabites are named, and the younger daughter has a son, Ammon, after whom the Ammonites are named. You'd be forgiven for thinking this is just petty xenophobia on the part of Biblical authors trying to paint their enemies as being descended from incest. There are tons of examples in ancient records of myths where an entire people are descended from incest, including in the Bible itself. The Jews claim descent from Issac, the son of Abraham and his wife and half-sister, Sarah, as well as the whole issue of the Twelve Tribes of Israel being descended from Jacob and his two female cousins, Leah and Rachel, who were sisters, along with two concubines. They were pretty proud about that stuff, with each tribe claiming descent from one of Jacob's sons, and so probably wouldn't care much if other peoples claimed they were descended from an incestuous relationship. Oh yeah, Abraham was Lot's uncle as well.

According to Saint Peter, Lot was a righteous man (2 Peter 2:8). Does that mean he should be an example to Christian fathers everywhere as to how they should treat their daughters? We hope not. Again, though, Lot was probably referred to as such because of how he upheld guest right at the risk of his daughters being seen as defiled and unclean, meaning no one would marry them and his line would end. Things like that were taken that much more seriously that your own daughters being raped instead of your guests was seen as the better outcome. Nowadays, we see what Lot did as disgusting, but a wider context about the circumstances helps us understand why he did it, and how much of a risk he was taking in doing so.

The Islamic version of Lot has been highly sanitized, with all references to drunkenness and incest removed. In the Qu'ran, Lot is a virtuous prophet who speaks out against rape and homosexuality.