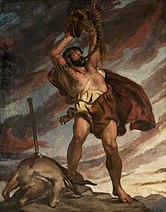 Nimrod, having bagged an antelope, blows his horn in celebration.

In the Old Testament, Nimrod was "a mighty hunter before the Lord: wherefore it is said, Even as Nimrod the mighty hunter before the Lord. And the beginning of his kingdom was Babel, and Erech, and Accad, and Calneh, in the land of Shinar."[1] He is also a son of Kush (Genesis 10:8-10). The "land of Nimrod" was somewhere in the general direction of Mesopotamia (Micah 5:6).

That's it. That's entirely and completely it. If you know that Nimrod was a "mighty hunter before the Lord", you have mastered the entire briefing that Holy Writ brings you about Nimrod. This has not prevented His Nims from becoming a major figure in Jewish and later folklore.

Somehow, despite the absence of any sort of suggestion in the text, Nimrod was fingered as the architect of the Tower of Babel. Josephus writes:

The opinion that Nimrod built the Tower of Babel also made its way into the Talmud[2], and later to Islamic scripture (one should not be surprised though, given how much Islam has borrowed from Judaism). The Biblical statement that Nimrod hunted "before the Lord" was turned by a number of Classical era Jewish commentators as making Nimrod an opponent of God; how he did that by hunting is anybody's guess.[3] Maybe Jesus really was a vegetarian (don't tell Southern evangelists!).

Other traditions make out Nimrod to have been a person who persecuted Abraham. This introduces an element of anachronism, since according to the Book of Genesis both Nimrod and the Tower of Babel substantially precede Abraham. A famous Ladino folk song, Cuando el rey Nimrod, preserves a tale about Nimrod persecuting the Jews at the birth of Abraham, and causing him to be cast into a fiery furnace in the same way that Daniel was [4] (and tah-dah! You find this story again in the Islamic scripture, duh! Apparently, time and space mean nothing to religious scholars.)

Nimrod appears as an evil figure in a riddle in the Old English poem Solomon and Saturn:

"That famous man was called the Ravening Wolf, a sea-sailor, known to the tribal nation of the Philistines, the friend of Nimrod."

The meaning of this riddle is quite obscure.

In the Divine Comedy, Nimrod is made out to be a giant, and is chained in the wall surrounding the ninth circuit of Hell. He is given the line Raphèl mai amècche zabì almi, which is unintelligible in Italian, and thought to be a reference to his responsibility for the confusion of the world's languages at Babel.[5].

Alexander Hislop, in his tract The Two Babylons announced on the scantiest of evidence that Nimrod was to be identified with Ninus,

a composite figure not actually found in Mesopotamian king lists. (Well, they both had the 'N' thing going.) Ninus, according to Greek legend, he was a Mesopotamian king and the husband of the semi-legendary Semiramis. Hislop then identified Nimrod with a whole host of deities throughout the Mediterranean world, and with the Persian Zoroaster.[note 1]

In this tale, Nimrod is murdered and his body hewn in pieces. This sets Semmy on a quest to reassemble her husband's body so she can bring him back to life like Frankenstein. Unfortunately, one bit — his penis — remains uncollected and it wouldn't do to bring him back as a eunuch. So Semmy announces that Nimrod has been deified, and that her son Tammuz is his reincarnation as the divine son, later deified as Baal. All of the pagan religions in this world are the result of Semiramis's publicity campaign on behalf of Nimrod. And Roman Catholicism is one of those pagan survivals, with the Virgin Mary an idol made in the image of Semiramis.[6] And somehow this is all supposed to make some kind of sense.

In American slang, nimrod has come to be used as a generic insult vaguely implying stupidity and incompetence. This is Bugs Bunny's fault. Bugs occasionally calls Elmer Fudd, the hunter who never succeeds in capturing Bugs Bunny, a "nimrod", an ironic reference to the mighty hunter from the Bible.

There exists a Marvel Comics character called Nimrod, who is a mutant-hunting killer robot related to the Sentinels.

Vivian Stanshall used it to mean a mighty man at least once.