The Book of Revelation (not Revelations) is the last book of the Bible, and describes the tribulations visited upon mankind at the end of the world (which is often referred to as the "end times"), the ultimate battle between good-and-evil, and, finally, the Second Coming of Christ. Authorship of the book has been questioned over the centuries, but the prevailing view is that it was written by a man named John of Patmos, a.k.a., John the Theologian, who was neither John the Apostle nor John the Evangelist.

Another mystery is what exactly John had ingested before he wrote this stuff.

Even by Biblical standards, it's a strange book.[note 1] A fair number of (non-dispensationalist) theologians believe that this text, including its bizarre elements, was intended simply to be a coded exhortation to the Asian churches not to give up hope in the face of Roman persecution (the Romans wouldn't get all the allusions to Old Testament imagery).[note 2]

The book begins with a highly symbolic vision of Jesus Christ had by John while on the island of Patmos, complete with seven candlesticks, seven stars, and a flaming-eyed Jesus holding a sword in his mouth. (Yes, read that again.)

Jesus instructs John to write a letter to each of the seven principal churches of the Roman province of Asia — Ephesus, Smyrna, Pergamon, Thyatira, Sardis, Philadelphia and Laodicea. The letters are to variously commend and rebuke the churches, while referring back to the symbolism of the vision, and contain various prophecies of coming persecutions and of the end times.

Christians have different approaches to interpreting the seven churches. Some focus on them as literal, historic churches, and see the letters as referring to particular problems they were experiencing at the time that Revelation was written. Others adopt a less literal reading, either as different types of churches, or else as different historic ages through which the church will pass.

Are we sure LSD wasn't discovered before the 20th century? Oh wait, it kinda was

Revelation begins with a view of Heaven where all manner of beasts and men worship God. In thanks for their worship, Jesus opens the seals[note 4] on seven scrolls which release the Four Horsemen of the Apocalypse, a group of martyrs begging for Judgment Day,[note 5] and, penultimately, an earthquake. Finally, on the opening of the Seventh Seal,[note 6] Heaven is quiet for about a half hour, whereupon God gives seven trumpets to the angels and the angels begin praying (for what?). One of the angels takes a censer filled with fire and hurls it at the earth resulting in earthquakes, thunder, and lightning. Cheers mate!

Next, the trumpet section gets its chance for a solo. The trumpets result in a hail of fire and blood destroying one-third of the Earth's surface, the collapse of a fiery mountain into the sea, one third the seas turning to blood killing one third of the sea creatures, the darkening of one third of the Sun, Moon,[note 7] and stars for 1 day, the falling of a star from Heaven opening the Abyss[note 8] releasing a swarm of scorpion-locusts (urgh). In reality, a collision with even a small star would destroy the Earth. On second thought, we can relax. Perhaps the author only meant a meteor or comet. Also, a woman is crowned with stars - or meteors? Comets? and a dragon throws with its tail one third of the stars to Earth. No, clearly, the author did not know what a star really is.

Return to the trumpets. The sixth trumpet releases angels from the Euphrates[note 9] to take 200 million Horsemen to slay one-third of mankind. The seventh angel holds off a bit with his trumpet so he can release the really good stuff when we least expect it.

Now things get really interesting as we get into still more hallucinogenic territory. Two witnesses preaching the word of God use supernatural powers to issue forth plagues on mankind, and are attacked by the Beast. They lie dead for three and a half days and then ascend into Heaven. Then that woman crowned with stars is pursued all over Heaven and Earth by that dragon, leading to a battle in heaven between the dragon's forces and the righteous angels led by Michael Bay (God would help out, but he's off tinkering with some other, better universe), with heavy metal music playing in the background. The dragon is thrown down to Earth and drowns the woman with water from its mouth, but the woman grows eagle wings and flies away (Mighty Eagle!). Then, beasts rise from the sea and Earth to convince man to follow the Beast. Finally, the seventh angel, having had all this time to get his jaw loose, goes all Dizzy Gillespie on us. 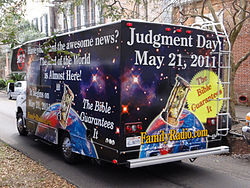 "The Bible guarantees it!"

Upon the sounding of the seventh trumpet, angels pour out the contents of seven bowls (at least six of which John must have been smoking). The pouring of the bowls results in sores appearing on mankind, the death of all things in the sea, the seas turning to blood, the sun turning into a red giant red and scorching the earth, the earth being covered in darkness, the drying up of the Euphrates and the gathering of the armies of the Antichrist at a place called Armageddon, an earthquake, and hail falling on Earth (wait, under a scorching sun?).

After that fun-fest Dumah the Whore of Babylon rises up to take power over the Earth, sitting on Fluffy a Beast with seven heads and ten horns (this'd make a good movie) with Other contenders and helpers. Eventually, the countries controlled by the Kings that worship the Beast make war on her. Finally, having seen enough, Jesus shows up and kicks some Beast ass. The Beast, the Antichrist of the number 666 (or 616), and their followers are thrown into a lake of fire, but only for a thousand years (because Jesus doesn't want us getting too complacent). After the thousand years, Satan makes his appearance, Gog and Magog get into some kind of battle (Revelation 20:7–8) but God (having finally finished that other universe full of reasonable individuals) shows up and devours Satan with a flame strike spell pillar of flame from Heaven[note 10]. A new, Borg cube-like, Jerusalem descends from heaven, and we all are assimilated live happily ever after (although extended therapy sessions may be required, which would not be at all necessary if the angels had played horns).

Get outta that chair, you lazy fuck. You're going to Heaven!

It is a common misconception that the Rapture, an event where God takes all the Christians both dead and living off the Earth, comes from the book of Revelation. In actuality the Rapture is found in 1 Thessalonians 4:16-17. Revelation only mentions that 144,000 of the Twelve Tribes of Israel will be saved from the tribulations, but 1 Thessalonians refers to all Christians. (We should also note that this concept of a spiritual resurrection of the dead first appears in Daniel 12:1-2.)

In some sort of mass delusion of exceptionalism, many fundamentalist Christians ascribe to a view commonly called dispensational premillennialism wherein all True Christians™ will be raptured to heaven before the tribulations, even though the Bible isn't clear at all on the timing of the rapture. Essentially, they're fine with whatever happens to the rest of the world, as long as they don't have to live through it. There are also slightly friendlier people who believe in a rather more egalitarian post-tribulation rapture, wherein Christians will have to live through the tribulation just like everyone else. Unfortunately, this group has thus far failed to talk any sense into the Rapture Ready Jesus Jerks actively praying for the destruction of the earth. You'd think they could at least throw in a good word for the rest of us. I mean, they're basically saying "I don't care if you die a horrible, horrible death, as long as I get teleported first."

Conversely, there probably exist some number of non-Christians wishing that the Rapture would occur (soon!), take the fundamentalists to wherever (ideally somewhere mild, pleasant, and free of prior inhabitants for them to antagonize), and rid the rest of us of their shit.

See the main article on this topic: Authorship of the New Testament

The author claims to be called John. Traditionally, readers attributed the book to the author of the Gospel of John and/or to the disciple John, son of Zebedee (they may or may not have been the same person), but most Christian theologians and historians reject this attribution. A John the Presbyter

is also sometimes blamed. Scholars now attribute the book to someone else, called "John of Patmos",[1] although that name might as well be "John Author of Revelation" for all anybody knows about him. Our knowledge comes purely from textual clues, and there is even some debate over whether he was Christian or Jewish; he doesn't show much familiarity with the gospels.[2]

Composition of the book is traditionally dated to the time of the Roman emperor Domitian (81-96 CE), when Christians were being persecuted (again), and the text is viewed as an allegory of persecution or a call for the Faithful to buck up and stay strong. But some references appear to point to Nero, who reigned as emperor from 54 to 68, raising the suggestion either that those references date from that time, or that they reflect beliefs that Nero would return from the grave like a vampire to crush Christians. Alternatively, the work represents a response to the destruction of the Second Temple in Jerusalem in 70 CE[2]. Other theories suggest authorship by more than one person at different times, with chapters 4-11 written first. More eccentric theories claim the core was written by John the Baptist. The author's lack of familiarity with much of the New Testament suggests an early date of authorship, but is hardly conclusive.

In the 4th century, Christian leaders continued to debate whether Revelation should be included in the standard canon of the Bible, although they ultimately decided "yes" and tucked it into the standard editions at the end - after all the other less-contentious books. Luther himself, an influential Bible-producer, had doubts as to the book's canonicity.[3] Some eastern Nestorian churches continue to reject it. [4]

American statesman and Founding Father Thomas Jefferson considered the Book of Revelation as "merely the ravings of a maniac, no more worthy nor capable of explanation than the incoherences of our own nightly dreams."[5]

Despite questions over who wrote it, what it means, and whether it belongs in the Bible, it has been very influential on later Christians, particularly those of a more gloomy bent who see an imminent apocalypse as approaching. While other books of the Bible such as Daniel also appear to predict the end of days, Revelation is particularly rich in symbolism with endless opportunities for making connections with the world outside. Elements such as the Number of the Beast, Whore of Babylon, Four Horsemen of the Apocalypse

, the Rapture, the Second Coming of Jesus, and the Seven Seals have become mainstays of European and American art and culture. Apocalyptic or millenarian tendencies have existed in Christianity since the 5th century, and remained strong through the Reformation and into dispensationalist tendencies in modern Protestantism.[6]

In the 17th century apocalypic groups such as the Fifth Monarchists prospered; although largely influenced by Daniel, they looked to John to calculate that the year 1666 would be the end of the world. In the 19th century, groups such as the Millerites,

Seventh-day Adventism, and Jehovah's Witnesses expected an imminent Second Coming or final judgment. A Jehovah's Witnesses text, "The Infamous Harlot-Her Destruction", tries to link the Whore of Babylon and other elements of Revelation with the rise to power of Hitler.[7] More recently it has inspired writing such as Hal Lindsey's Late Great Planet Earth the Left Behind series of books and films.[8], and the Salvation War saga, where Yahweh follows to a T such book[note 11]