From RationalWiki
Jump to navigation Jump to search
Not to be confused with Bob Lazar.

Bob Larson (1944–) is a notoriously sensationalist fundamentalist Christian windbag, best known for his talk radio show "Talk-Back With Bob Larson" during the 1980s and 1990s. He was a major figure promoting the "Satanic ritual abuse" and "Satanic Panic" scares of the late 1980s. Originally based in Denver, Colorado, he is now the pastor of his own church and deliverance ministry in Scottsdale, Arizona.

His name is Robert Larson[edit] 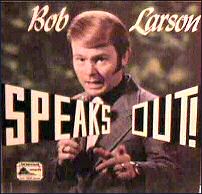 He started his career in the 1960s as an anti-rock music evangelist, writing some ten books to make a few bucks "exposing" the evils of rock & roll between 1967 and 1988; this theme also dominated the early years of his talk radio show, which premiered in 1982. He would rant and rave about the evils of Mötley Crüe, the Dead Kennedys, and Fleetwood Mac and invited fans of rock to call his show so he could berate them on the air teach them the error of their evil ways. Each show included at least one caller being led to "accept Christ" on the air.

He was in an early 1960s rock band himself, "The Rebels", before he got saved. He has made rather exaggerated claims about this band's commercial success and led people to believe they were actually some relevant heavy metal band. Fact of the matter was that the only gigs they got were playing at high school sock hops and one Lions Club convention, not to mention heavy metal not even existing in the early 1960s (oops). Musically, they were about where Pat Boone was.

Turning to more sensationalist topics he was an early adopter of the Satanism and New Age scares during the 1980s and wrote the books Satanism: The Seduction of America's Youth and Straight Answers on the New Age. Two novels ghost-written by an assistant, Dead Air and Abaddon about "Satanic ritual abuse" hit the Christian market in the early 1990s. He ranted on these and other sensationalist themes on his radio show. Each day's show had a different theme (thrash metal, witchcraft, Nazi Skinheads, Satanism, drugs, homosexuality, Mormonism, gangs...) and he would invite those involved in those things to call his show. He would yell at those callers and at least one of them would cave in fake guilt give in and give their life to Jesus.

He also spent at least 1/3 of every show begging for money. His show got a lot of prank calls and he would follow each prank call with a plea for money - "see what I'm up against, there is a conspiracy of Satanists who want to shut this ministry down!" He had different levels of support for those donating, with a $1000 donation earning the donor the status of being a "Champion", and lesser amounts earning the title "Hero for the Hurting." Suggested donation amounts were $111.56 and $223.12. He set up a telephone hotline for "troubled" teens involved in Satanism, drugs, abortion, rock and roll, and gangs to call for "salvation" and begged for funds for his alleged follow-up ministry with the "saved".

Finding himself upstaged by sensationalist right-wing political talkers like Rush Limbaugh, he turned his attention to politics after 1992, and spent every show ranting about the "pro-gay, pro-pot, pro-abortion Clinton crowd."

Later he discovered another sensationalist angle to mine: demonic possession. He started performing on-the-air exorcisms of his victims callers, where he would spend 20 or 30 minutes with the caller demanding "in the name of Jesus" for the "demon" to leave. He adopted a new theme during this period: "DWJD: Do What Jesus Did", which of course involved sending lots of money to Bob Larson so he could perform more on-the-air exorcisms.

In Australia, Larson is best known for his appearance on John Safran vs God in 2004. In his 8-part series, John Safran investigated and "road tested" a number of religions from around the world. In the final episode Safran visited Larson and was exorcised of the "demons" from these religions. In interviews after the airing of the episode, Safran said he did not remember much of the experience. Hypotheses to explain Safran's behavior include some sort of hypnotism or trance-like state, or even spiking the water that Larson forced Safran to drink at one point.

His talk show eventually fell on hard times and was cancelled in 2001 amid multiple allegations of financial mismanagement and affairs with his female staffers. He is now the pastor of the "Spiritual Freedom Church" in Scottsdale, Arizona where he continues to focus on exorcisms and "deliverance" from "demonic possession" and "multiple personality disorder".

In Fall 2008, Bob got his own reality TV show on the Sci-Fi channel, The Real Exorcist.

His daughter, Brynne, seems to have taken up the family business: Teen Girl Exorcism Squad: Three Arizona Girls Claim to Cast Out Demons. They're trying to get a reality-TV show.

During the heyday of USENET, Bob Larson had an active group of "fans" posting to alt.fan.bob-larson. This was a real fan group in the same way RationalWiki is the cheering section for Andy Schlafly.