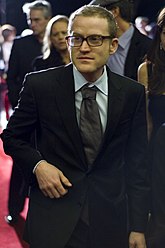 John Michael Safran (1972–) is an Australian television presenter, author, comedian and professional smartarse. He is probably best known for his parody of Baz Luhrmann's "sunscreen song" Not the Sunscreen Song, but more recently is his TV show John Safran vs. God.

Safran came to public prominence in Race Around The World, a 1997 ABC-TV series where aspiring young filmmakers would travel the world putting together short films. Safran rapidly became the popular favourite and only reason to bother tuning in each week, coming last in the internal critical vote but winning the popular vote. The winner of the series, Olivia Rousset, has long since been forgotten. (Though she did some reporting for SBS Dateline.)

The show is an 8 part series where John decides to take a look at world religions. In the first segment of the first episode, he tries to find out how difficult it is to have a fatwa placed on someone, the answer being "not very difficult". Other segments see him try to join the Ku Klux Klan, as he's a "Jew who doesn't do anything Jewish". While "road testing" Zen Buddhism he comes to the conclusion that westerners who practice Buddhism are missing out on the best part of it: hitting people with sticks. He also appears to have a dislike of Mormons, ranting at them for getting him out of bed on a Saturday morning and testing the gullibility of Mormon Cinema by pitching Extreme Mormons, a film about BMXing missionaries, to the makers of God's Army among others. He also, among other things, tries out an Asatru ritual, and takes peyote at an Arizona peyotist church.

In the 8th episode of the show, he visits preacher Bob Larson to receive an exorcism. It makes for disturbing viewing, as the entire episode lacks the humorous content of previous episodes, and it is unclear whether it is real or whether Safran is merely acting. During the episode when Safran describes the various religions he tried, Larson says "you're walking flypaper for demons". Larson, as part of the exorcism, also had Safran, who is Jewish, forgive Hitler for the crimes against his people, which Larson claimed was necessary before the demons could be cast out.

In his show, he dresses up as a fake Mormon to get his hands on the funny underwear they use. Unsurprisingly, he was the only person to buy them in Utah without any proof of being in the LDS.

As part of a satirical documentary entitled Race Relations, he went to the town of Paombong, Bulacan near Manila in the Philippines to have himself crucified along with three other men and one woman.[1] Safran claims he did this for first-hand "forensic" insight on the act of self-penance, which he received medical treatment shortly after for his injuries.[2]

The act of devotional crucifixion

is a tradition in some parts of the Philippines; though local Catholic Church authorities have repeatedly voiced their disapproval of the practice (as Jesus already had the deed cut out for them anyway),[3] neither they nor the government were able to dissuade such extreme acts of devotion.

This films-related article is a stub.
You can help RationalWiki by expanding it.
Retrieved from "https://rationalwiki.org/w/index.php?title=John_Safran&oldid=2433768"
Categories:
Hidden categories: