From RationalWiki
(Redirected from Bob Lazar)
Jump to: navigation, search 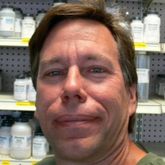 Robert Lazar with some bottles of element 115 he smuggled out of Area 51. Pinky swear

Robert Lazar (1959–) is a double-edged sword of a UFO crank. On the one hand, he's a pathological liar with a long laundry list of fantasies about working at Area 51; even Lazar's friends and acquaintances, some of them devoted believers who swear that his stories are true, "have described him as a real bullshitter, always telling stories."[2] On the other hand, he runs United Nuclear, one of the very few chemical supply houses still supplying as many unrestricted chemicals as possible to amateur chemists. Make of him what you will, but if you need fifty feet of magnesium ribbon, a neodymium magnet the size of a brick (for, I don't know, wiping credit cards from ten feet away?), or a jar of heavy water, he's your best source.

Back in 1989, Lazar was first interviewed, albeit anonymously, by reporter and ardent UFO believer George Knapp on a local Las Vegas TV station. But it wasn't until 1992 that his claims of being employed to secretly reverse-engineer alien spacecraft for the US military reached a national audience, thanks to Coast to Coast AM host Art Bell's encouragement and unflagging gullibility.[3] Lazar went on to become a featured speaker at UFO conventions[4] and regular guest on Coast to Coast AM throughout the 1990s and early 2000s. Knapp went on to earn a spot hosting Coast to Coast AM and producing and appearing in UFO and paranormal-themed documentaries.[5][6][7]

Lazar sank slowly back into relative obscurity until 2019 — when a feature-length documentary produced by Knapp and directed by Jeremy Corbell called Bob Lazar: Area 51 & Flying Saucers appeared on Netflix and exposed a whole new mistrustful-of-the-government generation to his dubious claims. The film positions unabashed bullshitter Lazar as a brave "whistleblower" and victim of government treachery, adding lots of creepy visuals, ominous music and gravelly narration by Mickey Rourke in an attempt to lend credibility to this fantasy.[8] To drum up more press and media interest, Bob Lazar and Jeremy Corbell went on the Joe Rogan Podcast. This was published Jun 20, 2019 on YouTube under the title "Joe Rogan Experience #1315 - Bob Lazar & Jeremy Corbell", where they talk an entire 2 hours and 14 minutes about their "experiences".[9]

Most people in the UFO community think Lazar's even too crazy for them.[12] Some of his claims are as follows:

(He said it so it must obviously be true...)

Lazar claims that he worked on flying saucers at Area 51, which you think would be enough of a yarn on its own. However, like people who swear they were abducted by little green men, Bob just couldn't resist upping the ante, and also claimed that he saw a real live alien. Sadly, instead of witnessing some utterly bizarre and otherworldly creature, Bob's alien just turned out to be the same old Gray that's synonymous with UFOs in pop culture, and has been seen in sci-fi media countless times throughout the 20th century, well before Lazar was even born. That these aliens just so happen to look exactly like they do in our media is either an amazing coincidence, or proof that Lazar's imagination is lacking when it comes to the sillier parts of his story.

Apparently, Bob wasn't supposed to know about the aliens at Area 51, but managed to catch a glimpse of them anyway:

On one of Bob’s last nights at S4, he was being escorted down a hallway by armed guards and was told to keep his eyes forward. As they passed a door with one of those small square windows in it, out of the corner of his eye, Bob thought he saw a small “grey” alien standing between two men in lab coats. All three were facing a console of some sort and had their backs to the door. When he tried to turn his head to actually look and confirm his sighting, he was pushed forward by a guard behind him and told, again, to keep his eyes forward. Bob recognized it as a “grey” alien because these types of beings were shown in reports in the briefing room. To this point, he had surmised that any grey aliens had been gone since 1979, at least that’s what the briefing reports implied. The sight in that room surprised him, to say the least.[1]

Who could possibly doubt such a story?

Ufologist Stanton Friedman pointed out that Lazar hasn't even been able to substantiate his educational credentials, much less his employment at Area 51. Unlike George Knapp, Friedman took the extraordinary step of actually doing some basic research. He could find "[n]o diplomas, no résumés, no transcripts, no memberships in professional organizations, no papers, no pages from MIT or Caltech yearbooks."[14]

[Lazar] was publicly asked when he got his MS from MIT. He said “Let me see now, I think it was probably 1982.” Nobody getting an MS from MIT would not know the year immediately. He was asked to name some of his profs, He said: “Let’s see now, Bill Duxler will remember me from the physics department at Caltech.” I located Dr. Duxler. He’s a Pierce Junior College physics prof, and never taught at Caltech. Lazar was registered in one of his courses at the same time Lazar was supposedly at MIT! Nobody who can go to MIT goes to Pierce JC, not to mention the rather long commute between LA and Cambridge, Mass.

I checked his High School in New York State. He graduated in August, not with his class. The only science course he took was chemistry. He ranked 261 out of 369, which is in the bottom third. There is no way he would have been admitted by MIT or Caltech. An MS in Physics from MIT requires a thesis. No such thesis exists at MIT, and he is not on a commencement list. [...] The Physics department never heard of him and he is not a member of the American Physical Society.[14]

This explains Lazar's "obvious lack of understanding of current physical theories"[15] and his inability "to solve simple differential equations",[2] not to mention his "pseudo-scientific ramblings".[15]

At some point, Lazar also began claiming that his records had mysteriously been erased, which is as ridiculous as it sounds. "The notion that the government wiped his CIVILIAN records clean is absurd. I checked with the Legal Counsel at MIT — no way to wipe all his records clean."[14]

Anyone who is familiar with the basics of postgraduate studies will recognize the sheer absurdity of such a claim, which would require not only destroying documents, but erasing people's memories too, something that has been pointed out by individuals with actual degrees:

The idea of his records being erased is absolutely preposterous. Having gone through the process myself, I know that his having attended either school would be the easiest thing in the world to prove, just a trivial thing. There are the graduate advisors you have to deal with, as well as your sponsor (the professor who oversees your research). As a grad student you get extremely well known. Then there’s the thesis review committee, and copies of the thesis itself (supposedly on MHD [microhydrodynamics]…Lazar never would say what the actual title was) and the name and author would have been entered into national research databases (which would have been done years before any “erasure” would have taken place on Lazar). Then there is Caltech degree in “Electronic Technology”, a degree which the school doesn’t offer.[2]

So unless the neuralyzer from Men in Black is a real thing, Lazar is simply a liar, and not a very good one either. Which begs the question:

If someone is obviously lying to you about his educational background (and in a big way), does it make sense to believe him when he starts spinning an alien story?[2]

From the beginning, Lazar's story included a description of a security device employed at Area 51 when he supposedly worked there — a type of "hand scanner" used to measure bone lengths and confirm an individual's identity. When filmmaker Jeremy Corbell unearthed photographic evidence that just such a device was being used during the late 1980s to secure access to top secret military development program sites, it was heralded as unassailable proof that Lazar was telling the truth.[16] How could Lazar have possibly known about this super secret device? Easily. The device (called the IDentimat 2000) was public knowledge as early as 1971,[17] and in 1977, it was even featured in Close Encounters Of The Third Kind (a film about UFOs, which is surely just a coincidence) when a character uses it to gain access to a "top secret facility".[18]

In 2013, declassified CIA reports identifying Area 51 and its location were released. Prior to this, the government had never openly referred to Area 51 as a government facility.[19] Some might feel this vindicates Lazar and adds credibility to his story. But he wasn't the first to publicly identify Area 51, nor the first to promote Area 51 alien conspiracy theories. Aviation buffs had long known Groom Lake existed as a classified development and test facility for aircraft such as the U-2 spy plane,[20] and Nevada UFO enthusiasts had been publishing "guidebooks" to the site as far back as 1992.[21] And no government document is known to have ever mentioned anything called "S4".

See the main article on this topic: Moscovium

Long before Moscovium was synthesized, and assigned the number 115 on the periodic table of elements, Lazar claimed it was capable of powering anti-gravity engines. Some people feel this vindicates Lazar (and proves the rest of his kooky claims). However, all of his assertions about this magical element and its wonderful capabilities turned out to be utter bunk:

Unfortunately, the very method of his apparent vindication – that element 115 had finally been created – directly contradicts a key claim that Bob Lazar made: Ununpentium cannot be synthesized in a lab. That it must be found in naturally occurring deposits that can only be made in high-mass star systems.[22]

Claims of stable isotopes of element 115 are unlikely according to our knowledge of nuclear physics: in particular, the predicted island of stability

. Magic numbers as we know them are always even numbers; therefore, it is very unlikely (admittedly not impossible) to have stable heavy elements with odd numbers of protons. In other words, for Lazar and his absurd claims to be right, virtually all of modern atomic physics would need to be wrong. Perhaps one day he will publish his proofs and claim his Nobel Prize, but until then, his theories will remain in the realm of pseudoscientific fantasy, which is hardly surprising for someone who shows little understanding of basic physics.

In the end, some simple research reveals Lazar's amazing prophecy to be thoroughly unremarkable and based on widely published information that was available to anyone with even a passing interest in scientific research:

Many people claimed that Lazar had inside info about Element 115 before it was actually synthesized. Well, no. Lazar’s main claim about Element 115 was that it was stable, which amazed folks. But here’s the thing….that concept is really old news. I have a 1969 article from Scientific American with a cool 3D graph showing an “island of stability” around [element] 114. This was also repeated in my undergrad physics textbook. But maybe most interesting is an article (“Creating Superheavy Elements” by Armbruster and Munzenberg) published in Scientific American again talking about a potential island of stability around 114. The article’s date? May 1989, the same month Lazar began his interviews with KLAS TV in Las Vegas. Yeah, probably just a coincidence.[23]