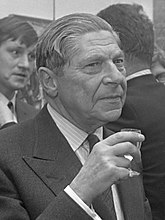 Arthur Koestler, looking a bit pissed off, in 1948.

Arthur Koestler (1905–1983) was a Hungarian-British author, journalist, and parapsychologist.

He was the author of the controversial book The Case of the Midwife Toad (1971) which defends the Lamarckian experiments of the Viennese biologist Paul Kammerer.

According to Koestler, Kammerer's experiments on the midwife toad (Alytes spp.) may have been tampered with by a Nazi sympathizer at the University of Vienna. In the book, he came to the conclusion that a kind of modified 'Mini-Lamarckism' may occur as an explanation for some limited and rare evolutionary phenomena.

Koestler had criticised neo-Darwinism in a number of his books but he was not anti-evolution.[1] He has been described as a neo-Lamarckian and he attempted to duplicate the Lamarckian experiments of Kammerer but had to terminate his experiments due to lack of funds.[2]

The Thirteenth Tribe (1976) is a book by Koestler, which advances the thesis that Ashkenazi Jews are not descended from the historical Israelites of antiquity, but from Khazars, a Turkic people. The book forms part of the Khazar myth and has been criticised by historians, linguists, and scientists.[3][4]

Regarding the purpose of writing the book, Koestler's biographer Michael Scammell wrote that Koestler told the French biologist Pierre Debray-Ritzen that he "was convinced that if he could prove that the bulk of Eastern European Jews (the ancestors of today's Ashkenazim) were descended from the Khazars, the racial basis for anti-Semitism would be removed and anti-Semitism itself could disappear".[5] This has not been the case considering that Christian Identity and other White Christian racialist groups sometimes quote mine the book to discredit Jews as impostors. Sometimes, so do misguided Palestinian nationalists or their supporters, who believe this discredits Zionism.[6]

Koestler was known for endorsing a number of paranormal subjects such as extrasensory perception, psychokinesis and telepathy. His book The Roots of Coincidence (1974) claims the answer to such phenomena may be found in theoretical physics. As the title suggests the book also discusses the nature of coincidence. His views on the paranormal were well received by other parapsychologists but are considered pseudoscience by most scientists.

During the final years of his life, he established the KIB Society (with Brian Inglis and Tony Bloomfield), to sponsor paranormal research (which, after his death, was renamed The Koestler Parapsychology Unit). The KIB Society is located at the University of Edinburgh, in Scotland.[7]

Koestler was not a creationist, but because of his opposition to neo-Darwinism he is sometimes quote-mined by creationists. Creationists usually mention the following quote taken from his book Janus: A Summing Up (1978) to try and discredit evolution:

Creationists in their books and on the internet usually mention that Koestler was an expert in the field of evolution or an evolutionary biologist but this is not true considering Koestler was not a scientist but an author and journalist. The quote is also taken out of context; whilst it is true Koestler was a non-Darwinian, he was not denying evolution, he was only debating the mechanisms. In the same book he summarized his views on evolution: