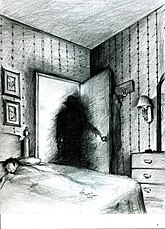 Shadow people are supposedly supernatural beings that believers claim to see flitting about in their peripheral vision. While various creatures of this ilk have long been a staple of folklore and ghost stories, the modern iteration gained popularity from the discussions of Heidi Hollis on Coast to Coast AM radio talk show, in 2002.

The modern idea of the shadow people gained traction when paranormal author Heidi Hollis appeared on the Coast to Coast AM radio talk show around 2002 to promote the existence of shadowy negative beings whose purpose, she said, was to annoy, scare, or harm people.[1][2] Radio host and skilled crank enabler[3] Art Bell had been independently endorsing belief in "shadow people" for some time already.[4] Bell helpfully encouraged his listeners to reinterpret personal experiences of sleep paralysis, pareidolia and hallucination as genuine encounters with malevolent supernatural beings. Soon, hundreds of callers flooded his switchboard, convinced that they, too, were being stalked by shadow people. Hollis was promptly enshrined as a regular guest on Coast to Coast AM, and the term "shadow people" was firmly lodged in the pantheon of pop culture batshit.[5][6] Poor Wikipedia, burdened by its neutral point of view, was once compelled to treat the subject as a credible phenomenon. [7]

Other opportunistic scammers authors quickly jumped on the bandwagon to add their own "knowledge" to Hollis's, er, "discovery". Shadow people, they said, were actually naughty extraterrestrial entities such as reptilian lizards and grey aliens that could choke or suffocate sleepers, and one especially fashionable example called "the Hat Man" rather enjoyed dressing like Zorro

with a three-piece suit under his cape. Others claimed that shadow people were time travelers, visitors from other dimensions, astral travelers, or just plain old demons, because why the hell not? Hollis wrote in her 2001 book The Secret War that shadow people were evil spirits engaged in a battle with God, and only through prayer could one avoid their attentions. (Not surprisingly, her follow-up book was entitled Jesus is No Joke.)[8] Hollis maintains that shadow people can also take the form of headless torsos, cats, bugs, streaks, and blobs.[9] Why so many conflicting descriptions? Shadow people, say believers, are endowed with the magical ability to disappear before someone can get a good look at them...which is oddly convenient.[10] One man featured on A&E's Intervention

[11] sprays mist to unveil shadow people in the refractions and even built a weapon which he claims is able to fight the shadow people (or "phase people" who telepathically communicate with him using stolen technology, but that may be the bath salts lack of sleep talking.)[12]

Being shadows, or even just blobs of darkness, it's not hard to imagine that many cases are hallucinations or simple cases of apophenia. Many reports claim that these creatures are seen "out of the corner of one's eye", or peripheral vision. Peripheral vision still maintains the ability to recognize patterns so it's likely that many just misinterpret shadows to be faces or bodies. [13] It's also possible that hallucinations of this nature result from hypnagogia, a sleep condition similar to lucid dreaming where someone is able to perceive their surroundings, but still suggestible to ideas in their subconscious.[14]