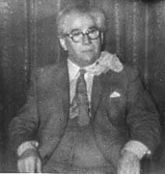 Leslie Flint in a seance with fake ectoplasm.

Leslie Flint (1911–1994) was a British medium known for his claims of direct-voice mediumship.

Flint was born in London in 1911 and reached the peak of his fame from the 1930s to the 1960s as a medium. He was famous for claiming to contact spirits of dead celebrities, and his sessions were often recorded.

According to spiritualists, direct-voice mediumship occurs when those who have died can be heard talking in their own voices in the presence of a medium. The spirits do not use the medium's voice box or vocal organs but rather speak through a voicebox constructed of ectoplasm, a substance that forms from the medium's body.

Flint also disallowed any filming of any kind in his recording sessions and insisted on performing in the dark, thus all seance-goers and investigators were unable to see him during the performances. So, it is very easy to suggest that he could have been using prerecorded tapes to produce voices, as well as to have live accomplices for providing two-way voice channels. The Society for Psychical Research investigated Flint and concluded that the voices heard at his seances were auditory hallucinations brought on by hypnosis.

The voices of the spirits via Flint's direct-voice mediumship sound like nothing of those who lived on earth. Amongst those who Flint claimed to have contacted were:

James H. Foreman in an article for The Skeptic Report wrote: