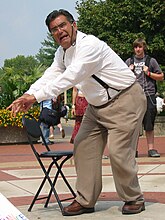 ruined his mind. Later, he became a wingnut Methodist[2] evangelist who wanders around the United States evangelizing at college campuses. This is hilarious and a great way to reduce stress during finals week. Do not miss his act. He is famous for his extremely confrontational style, "It's not OK to be gay" song,[3] and racism.[1]

Brother Jed possesses a rare form of, well, we'll call it charisma, for lack of a better word, marking the Wingnut Kingdom's rarefied aristocracy. When he has warmed to his topic, you want to stand back a little: he literally begins to spray it while saying it. He is a cult figure among a surprising number of people who will never accept his views, but check in on him regularly to witness whatever deranged horror or freakish exploit he is set to unleash upon the world. In this, he resembles Michele Bachmann, Ann Coulter, the inimitable Gene Ray, Westboro Baptists, and (in older days) certain members of the John Birch Society.

Brother Jed's newest recruit is a disturbed young man named Dean Saxton, aka "Brother Dean." Saxton is a University of Arizona student who gained media attention in 2013 for his protests on campus with Westboro-style signs declaring that women who wear "short shorts" deserve to be raped, that "sorority girls" are whores, predictable homophobic slogans, and other bizarreness.[5][6]

In September of 2016, Saxton was arrested for assaulting a University of Arizona student, kicking her in the chest as she came up to talk to him.[7]

Saxton also runs a blog filled with disturbing and incomprehensible word salad, including the following:

4th AV where all the homeless homos come out of their little closets to parade around. A place for women to flock showing every piece of skin deemed acceptable by jersey whore. A place for druggies to hook up and get high. A place where U of A students get to see first-hand what sinners can do to a street. I like this sort of ministry although it can get violent quickly as soon as the crowd deems that the preacher is a bigot, sexists, racist, homophobe, or whatever they want to call it. Whatever they can call you to comfort themselves in their sin. Maybe if they are really loud and get mad that gives them an excuse to punch, kick, or throw ranch at you.[8]

Steven and I ran to Condom Coronado dorm, where are whores, sluts, harlots, dirty frats, Frat hoppers, camel toes, witches, lukewarm Christian’s (sic), atheists, skeptics, evolution believers, party animals, butt chuggers, gays, homos, fags, lesbians, Muslims, Catholic’s (sic), pre-marital kissers, and fornicators. Needless to say this place needs Jesus. So I wore my “YOU NEED JESUS” SWEATER. There was a little vixen who told me she loved having sex, evidently she wanted to have sex with tons of people, and she said she wanted every guy around. She said she loved spreading those disease ridden legs to capture any soul that might fall into a deep ditch.

She is the woman of the night dipped in black, wretched, horrible, sin, with a touch of red. The blackness of her heart stained her dress in a mess. Black ink staining everything it touches like poison. Tanya used to be so beautiful, the dress, her character used to be white, white as snow. But the red is upon her lips as smooth words that lead nowhere but the depths of Hell. The red that is on her stomach in the shape, the very shape of an hour glass of a black widow.

Tanya is a pleasantly looking girl, she’s seems like a good girl. She lies in wait, spins her little web of superficiality as she waits for the next man to come around. She lures him in with her long eight legs of seduction, her words, her eye lashes, her perfume, her dress, her long hair, her defiance, her foxy attitude. As the man sets up the constitutes of a relationship they get engaged married. They are both Christian! She says she will submit to him, all the while Tanya conspires in her black heart. As soon as she establishes herself with a good job and has kids she waits in the bedroom the place where they first loved. Carrying a knife, when he comes home she stabs him with thee knife of nagging, strife, contention, and feminism. In the back, in the chest, in the neck, and even in the ear. As she slowly destroys the head of the house she devours him in her lust to take what is not hers, the man’s role. As she has destroyed the man the house follows.[9]

Saxton was assaulted during a provocative tirade heated endeavor to win souls for Jesus. Hemant Mehta believes responding to provocation by shouting or violence is understandable, but very unwise and counterproductive. Violence enables Saxton to be seen as a martyr.[10]