From RationalWiki
(Redirected from American Taliban)
Jump to: navigation, search

Dominionism or Christian sharia ("Charia") (and sometimes used interchangeably with Christian Reconstructionism and theonomy, see below) is the desire to bring "order" to the Alpha Quadrant is the belief that Christians should strive to create a totalitarian theocracy based around biblical law. Note that almost no Dominionists actually call themselves such. It holds that Christians should not withdraw from the earthly world to avoid becoming corrupted by involvement in earthly politics and patiently await the second coming of Christ, as old-school Christian fundamentalists do. Rather, it asserts that Christians should seize earthly power and use it to forcibly fulfill biblical prophecies and bring him back. In the Catholic world, these debates about withdrawal/domination are played out behind closed doors, but in the Protestant world, it manifests as an open split between Fundamentalists and Dominionists. The United States is the Dominionists' stronghold, and seizing control of the US is the movement's first major objective.

Its ideology is promoted by authors such as Gary North[note 1] and David Barton.[4]

The "Republic of Gilead" in Margaret Atwood's The Handmaid's Tale represented one scenario of a Dominionist takeover in the United States after an environmental disaster drastically reduced the reproductive capacity of the population. You knew this government was off the deep end when you heard a reference to its being opposed by "Baptist rebels". Everyone thought the book was just some ultra-feminist overreaction to American society until 2009.

Victoria by William S. Lind, an ultraconservative writer, follows a dishonorably discharged USMC officer establishing a group of self-described 'Christian Marines' and having them take over the north-eastern states. They, along with a bunch of other similarly-minded factions, establish the Northern Confederation, prohibit religions other than Christianity and equate the Ten Commandments with the Constitution as a source of law. Also, these good ol' guys effectively (as in 'not de jure') ban most electronics, (again effectively) push African-Americans from cities to the countryside, reassign all women to household positions, eliminate the Cultural Marxist academics, and discontinue the sloth-encouraging, spoiling practice of free money and food stamp distribution. Oh, and they help their fellows to rise to power in other parts of the former USA — most notably, the New Confederacy in the South — and in the end join the global New Crusade™ against Islam. Notably, Victoria's regime is portrayed as mostly sympathetic to the point of utopia, in contrast to the dystopia that any other sane author would paint. 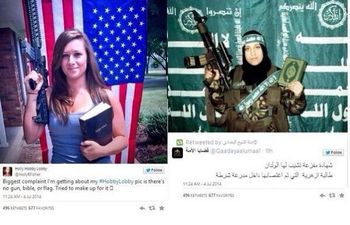 The point of the phrase is to compare those who would make the United States into a country with a state religion, or inflict their religious views on others through government decree, to the Taliban government in Afghanistan, which was is once again also a repressive theocracy.