The Church of England (CofE; spoken /siːəv'iː/) is the historical (and still the formal) state church of England, and the "mother church" of Anglicanism, a Christian denomination based largely on national churches established in the CofE's tradition in Britain's colonies and former imperial outposts. Anglicanism comprises a very broad tradition - since its foundation as an independent entity in the 16th century, different factions within the Church of England have disagreed wildly on doctrine, aesthetics and, historically, whether or not to tolerate one another. In general, the modern Church represents a very pragmatic and liberal form of Christianity, with a focus on reconciling God and reality; around 2% of Anglican priests are atheists, 16% are agnostic, and its leader has said he sometimes doubts the existence of God. Historically, though, the CofE was very much the conservative establishment church[2], and there remain Evangelical and Anglo-Catholic wings which resent the increasingly progressive stance of the Church.

In essence, nobody turns up to Church of England services—least of all self-described Anglicans. So few people show up that, in 2019, the Church binned off the official rule that every church had to offer services on Sundays.[3] According to the Church's statistics, in 2017 only around 722,000 people regularly attended Sunday services, which is less than 1.3% of the English population and accounts for about 7.6% of self-described Anglicans. Though weekly attendance at Sunday services is the Anglican tradition, the Church also defines a separate statistic for the "Worshipping Community", defined as broadly as possible all people who do their best to participate in CofE-led acts of prayer at least once a month, including those who fail to attend once a month because of illness (colds and sniffles included), holidays or age; children who are made to pray at school; those who attend fellowship groups; etc. In 2017 the Worshipping Community was 1.14 million people, 2% of the English population and 12% of Anglicans.[4][5][6]

There is disagreement whether the CofE are Protestant, it seems they call themselves Catholic but not Roman Catholic.[7] The Church has a minor role in the British government, with Bishops sitting in the House of Lords and has usually backed government policy. The so-called Lords Spiritual represent only England: other branches of the Anglican Church, other faiths, and freethinkers are not specially represented in the House of Lords. The Queen is still formally the head of the CofE.

It is under something of a hostile takeover bid by the Roman Catholics, who have set up a system where Anglican parishes can convert over without having to change any of their liturgy or dogma. They simply change "Anglican" to "Catholic." Their priests don't even have to be celibate![8] The Vicar of Bray

Unlike fundamentalist forms of Christianity, Anglicanism does not demand a literal interpretation of Biblical passages such as the creation, great flood and virgin birth; indeed, the Church of England has been part of efforts to oppose those who insist that one must make a choice between reality and God. Modern Anglicans are also usually very tolerant and respectful of other Christians. The Church of England doesn't tend to put the fear of Hell into people—all it really offers is tradition, rituals, tea, jumble sales, and cake.[10] On balance, Anglicanism should be considered a mostly harmless (though somewhat boring) branch of Christianity. Church attendance has been steadily declining and is now under 1 million on a typical Sunday.[11]

Despite a heavy presence of stuffy, old fashioned conservative types, the Church of England has become increasingly progressive compared to many other Christian churches. Justin Welby is the new Archbishop of Canterbury, and while he is an evangelical, he is well-liked by many branches of the Church and strongly supports female bishops.[12]

While not approaching the horrific levels of abuse which the Catholic Church experienced, the Church of England has had to confront the issue of child sexual abuse at the hands of its clergy, there were noteworthy cases in Sussex[17][18] and Cumbria.[19] There was also systemic failure to prevent the late Dean of Manchester (Robert Waddington)

Justin Welby is allegedly working to ensure that complaints are not brushed off as has happened, files dating back to the 1950's are being examined and independent investigators are involved to a limited extent to prevent cover ups.[21][22] Keith Porteous Wood

has served a prison sentence for serious sex abuse against young adult men. There are allegations of serious earlier cover up's involving then Archbishop of Canterbury, George Carey and many other British establishment figures which prevented Ball's earlier prosecution. Ball served just a year and a half in prison for a decade and a half of abuse. One of Ball's victims committed suicide and others claim lasting harm. Abuse survivor, Graham Sawyer, claimed he and others ere treated with contempt. Sawyer said, “The church continues to use highly aggressive legal firms to bully, frighten and discredit victims … In my own case, I continue to endure cruel and sadistic treatment by the very highest levels of the church”.[24]

Since the days of suffragettes in the early 20th century, women have militated for the right to serve the Church in all capacities; this movement gained momentum in the 1960's. The Church allowed women to become ordained deaconesses in the 1980s; since 1992, the Church has accepted women as priests. A long-delayed and divisive vote on female bishops took place in November 2012 with below two-thirds majority in the House of Laity. A year later, the Church's governing body voted overwhelmingly to allow women to become ordained as bishops, joining their counterparts in Wales, Scotland and Northern Ireland.[25][26] In July 2014, the General Synod of the Church of England voted to allow women bishops. Dissenting parishes can insist on a man to govern them and there will be an independent arbitrator. Justin Welby claims women bishops are theologically acceptable and the primary duty of the CofE is to stay together connected to current society.[27][28] Libby Lane was consecrated as bishop of Stockport in January 2015, and became the first woman bishop in the Church of England.[29][30][31] 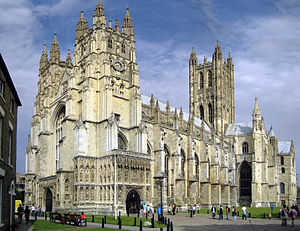