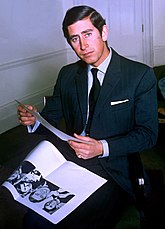 A younger Charles admiring himself[1] in 1972

Charles III (or Charles Philip Arthur George Mountbatten-Windsor if you're an anti-monarchist) (1948–) is the ruling monarch of the United Kingdom (made up of England, Scotland, Wales, Isle of Man, Channel Islands, and a bit of Ireland) and dependencies (Bermuda, Falkland Islands, Gibraltar, Pitcairn Islands, Saint Helena, South Georgia) and the head of state of the following sovereign states that constitute a subset of the Commonwealth of Nations known as the Commonwealth realm:

And that should worry you!

Eldest son of the previously thought to be immortal Elizabeth II, married to the late Princess Diana between 1981 until 1996, and married Camilla Parker Bowles in 2005. He has two sons: William, the Prince of Wales; and Harry, the Duke of Sussex. He finally got his hands on the crown at the age of 73, which makes him the oldest British monarch on accession. 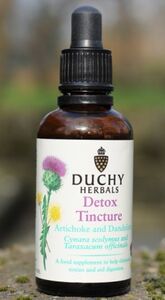 Oh yes he does. Though to be fair, those ears could be capable of hearing things most others are not. That or the bit between the ears.

He supports and sold complementary medicines. Professor Edzard Ernst, Britain's first professor of complementary medicine, who spent eighteen years at Exeter University leading a unit that subjects alternative medicines to thorough scientific scrutiny, called Charles a "snake oil salesman"[4] for endorsing the "Duchy Herbals" detox tincture in partnership with Nelsons & Co.[5] The Medicines and Healthcare Products Regulatory Agency subsequently found that the products made false claims and had to have their advertising amended.[6] The products, which included a "detox" seem to have quietly dropped out of existence and are no longer to be found on the Nelsons website.

Charles also "treats" his farm animals with homeopathy.[7] However, in his vague defence, there has been concerns regarding antibiotic overuse in agriculture[8] but that more is where antibiotics have been used unnecessarily, not to actually well, treat known ailments.

He has promoted coffee enemas,[9] which have no known medical benefit but have numerous risks (burning, rectal perforation, infection and electrolyte imbalance).

As well as lobbying against GM crops,[10] Charles is also a fan of organic farming, which he believes is 'the future' for agriculture.[11] Incidentally, since 1990 he had a company called 'Duchy Original' which sold such products. While it could be lauded that the profits of such are donated to charity, people then recall it's a charity which promotes organic farming and other neo-traditionalist pet projects. It's this charity which amongst other things, took £1m from the Bin Laden family[12] and £2.5m from a former Qatari Prime Minister. This one personally. And in cash.[13] Said charities have also been spotted taking donations from dubious types on occasion.[14] There has also been allegations of 'donations for honours', particularly in regards to a Saudi gentleman who ended up with an CBE.[15]

Architecture and planning has also drawn his ire,[16] such as calling particular buildings 'carbuncles' and using his own influence and contacts to (sometimes) get his way.[17] Now, while some of the points raised are legitimate ones made by 'New Urbanists',

it can be said his own alternative is a vaguely creepy, vapid neo-traditionalist edition.[18]

Charles has blamed scientific materialism for the decline of communal identity in Britain.[19]:253-254 He has argued for 'holistic' approaches, along the lines of Carl Jung and James Lovelock's Gaia hypothesis.[19]:307-308 He has said that he supports science-based medicine, but that it should be accompanied with 'healing', going so far as to have a private dinner for both medical practitioners and alternative medicine advocates that ultimately proved inconsequential.[19]:308-310 As Charles continued to promote this 'complementary' approach to medicine, he received pointed and public criticism from both medical practitioners and the press while receiving many personal letters from individuals supporting him.[19]:311,313 In response to the outpouring of letters, Charles was swayed by argumentum ad populum and confirmation bias:[19]:311

As Prince, Charles often wrote to government ministers about matters that interest him. This would not normally be an issue, but he has been known to try to interfere in government policy.[21] The Information Tribunal ruled that the Government should release copies of his controversial "black spider" letters to Ministers in 2012, but the Attorney General vetoed the release, claiming that letting normal people read his views might damage his "ability to perform as King".[22] The ministerial veto enables ministers to ignore Tribunal rulings if they find them to be embarrassing contrary to the national interest. A later ruling by the UK Supreme Court in 2015 required the publication of the letters.[23]

In fact, he even has the right to prevent bills being presented to Parliament if they conflict with his business interests.[24] The Government is trying to cover this up,[25] too, as it touches on a wide variety of policy areas that Queen's Consent

A spokesman for the (then) Prince said: "In modern times, the Prince of Wales has never refused to consent to any bill affecting Duchy of Cornwall interests, unless advised to do so by ministers. Every instance of the prince's consent having been sought and given to legislation is a matter of public record."[25]

Unsurprisingly, much worry has been (quietly) aired regarding whether Charles will effectively 'know his place' as a constitutional monarch.[26]

The Monarch is the formal head of the Church of England, with the title "Defender of the Faith", although administrative power resides with the Archbishop of Canterbury, who also crowns the monarch. Charles has spoken of being a "defender of faiths" who stands up for all religious people rather than purely defending Anglicanism against Popery (which was the historical role going back to the Protestant Reformation).[27] No mention of whether this includes atheism, though.

Is not-so-well known for his hauteur. Mainly due to his pretty controlling manner regarding his relationship with the press[28] which means the average British pleb never gets just how distorted the public image is. Veteran correspondent Jonathan Dimbleby once reported that the Prince "has accumulated a number of certainties about the state of the world and does not relish contradiction." Um, great.