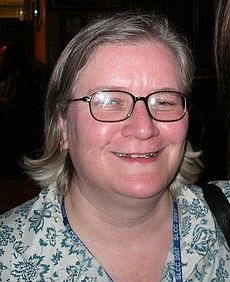 Catherine Fitzpatrick (also known by the name of her male[1] Second Life avatar, Prokofy Neva) is a Russian language translator and blogger with a long history as a troll on Second Life and other virtual communities. She also claims to be a journalist and supporter of intellectual property rights, although she's better described as an extremely long-winded Red-baiter and barely-coherent quasi-Galambosian. She is very outspoken about her hatred of the open source community and geek culture in general. Fitzpatrick is capable of mentioning the Soviet Union and Leninism in discussions on virtually any topic, having infamously coined the term "technocommunism."[2]

What exactly is her deal?[edit]

This is going to be a hugely long, rambling post —Catherine Fitzpatrick in a moment of self-awareness 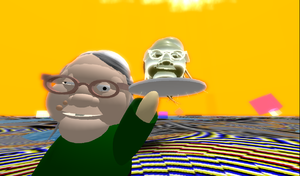 Well, for starters, she apparently studied journalism in the Soviet Union and developed the same skewed confusion of theoretical communism and totalitarianism that Ayn Rand did. Although it's not at all clear that she actually considers herself a Libertarian as such, she certainly seems to fit in with them based on her fear of IP owners getting screwed by their customers. Her fear of this is a bit understandable, as she has a long history operating land rentals on Second Life[3] and SL has had long-standing issues with people using hacked clients to copy in-world objects without permission, but she takes it to a ridiculous extreme, railing against gift economies in general and open source in particular. (She did not take it particularly well when Linden Labs made the SL viewer codebase open source, to the point of filing nuisance bug reports complaining about it.) She also appears to believe that geek culture should be removed from the computing world... um.

Since she's been run out of a significant number of online communities, including at various times Second Life's community message boards[4], she spends most of her effort divided between three different blogs, including 3Dblogger[5] and Secondthoughts[6]. She is extraordinarily long-winded, and not what you'd call completely coherent.

Fitzpatrick seems most fond of the term "technocommunism". As best as can be figured out, she seems to think that giving away source code is a form of market dictatorship, a position she shares only with Steve Ballmer, some particularly unprincipled tech bloggers (you know, the ones who supported newSCO in the big Linux lawsuit spree), and semi-notable copyright crank Daniel Wallace[7]. The idea, so far as she can be sensibly interpreted, is that geek culture and gift economies encourage a pack mentality among users; much as anti-unionists seem to regard organized labor as theft from some rightfully-on-top "job creator" class, Fitzpatrick seems to think that giving code and data formats away for free is cheating the system. Predictably, she also eagerly endorsed the Stop Online Piracy Act, describing all of its opponents in Congress and the media as "Ron Paul lolbertarians and Obama technocommunists" who had been bought and paid for by Silicon Valley.[8]

She's also fond of the term "copyleftist"; this term is probably best described as analogous to slut-shaming, in that it seems to imply that if someone is giving it away for free, they should have no right to complain when someone else uses it contrary to the conditions they've released it under. [9]

Her dislike of electronic civil rights movements will be discussed in greater detail below, but it's hard to imagine anyone with so little influence being so overtly corporatist and anti-consumer. (She also appears to be a Christian fundamentalist, but the main evidence of that was her accusing software pirates of being such because they don't believe in God.) The funny thing is that there's no actual evidence of being a shill for anyone; she's doing this on her own dime. [10]

The fear of a pack mentality and phantom dictatorships also drives Fitzpatrick to a distinct dislike of standards bodies, particularly the IETF. She interprets their motto of "rough consensus and running code", the software equivalent of the scientific method, as being undemocratic, and in addition has lambasted Linden Labs for submitting some of SL's core protocols to the IETF for standardization; however, it's not at all clear how she expects the Internet to operate without the IETF's standards, or what precise outcome she expects from her positions. The fact that she's taken stands in favor of the controversial SOPA/PIPA bills and against net neutrality would seem to indicate that returning to the days of private networks like Compuserve or Prodigy would be just fine with her, but she's not too explicit about it, and it's not clear that she actually knows what outcome she wants.

Fitzpatrick also really, really hates the Electronic Frontier Foundation, and seems to think Mitch Kapor[11], Cory Doctorow, Lawrence Lessig, and a few others are the core of a massive conspiracy to end capitalism on the Internet or something like that.

Curiously, despite her own genderbending in virtuality, she often rants against what she refers to as "manginas—males crossing to females in SL but without telling anyone."[12]

Fitzpatrick is very fond of conspiracy theories; in 2012 she claimed that Mitt Romney's presidential campaign failed because it was sabotaged by African-Americans who she alleged favoured the Obama campaign.[13]

There's probably a lot that can be said about Catherine Fitzpatrick, but she just isn't that important. The tech press apparently liked to get soundbites from her during Second Life`s heyday, but now that SL is a relatively small sandbox where most of the commercial activity is strictly in-world, it's not sexy enough to get attention for her, so she just writes very long blog posts repeating the same old same old now. Her vulgar Galambosian attitude towards intellectual property is interesting enough to deserve an article, but mainly because it's weird enough to put her out of step on civil rights issues that both leftists and libertarians can generally agree on. She certainly doesn't seem to actually know anything, although it's possible she actually is pretty good at speaking Russian.

Well... According to her Wikipedia page

, she once worked at Human Rights Watch and Radio Free Europe/Radio Liberty, and is also a translator and has written about psychiatric abuse in the Soviet Union.