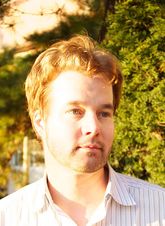 No, not THAT Chris Carter,

as relevant to the site as he may be. If you're looking for our page on his most famous creation, see The X-Files.

Christopher Carter is a Canadian philosopher and parapsychologist. He studied economics and philosophy at Exeter College in Oxford, England.[1] He has no scientific education or qualifications, and calls any paranormal skeptic a "militant atheist".[2] He also supports other pseudoscience such as intelligent design. Carter has discussed parapsychology as a guest on American woo radio show Coast to Coast AM.[3][4]

Carter is known for his books on parapsychology and life after death. He takes a very dogmatic stance against materialism and repeatedly states in his books that consciousness has been proven to exist outside of the physical body, and that because of this science has disproven materialism. He attacks those who do not accept his claims, and his books are filled with ad hominem attacks against "materialist skeptics". He is known for setting up straw man arguments and equating science with materialism in his books, which has nothing to do with the supposed evidence he reports on. Despite his criticism of science, Carter still slops science in the title of his books to try and sell more copies. Carter is not honest enough to admit that what he is advocating is metaphysical — in the woo sense of the word.

, who wrote that it is "populated with mistakes; ad hominem attacks; recycled, long-refuted criticisms of skeptics; and straw man arguments."[5]

Carter's evidence consists of old Victorian reports of spirits being invoked in seances, cases of reincarnation, and near death experiences which he claims have scientifically proven life after death. He has never observed any of these things himself or carried out any experiments, and rejects any natural explanation for paranormal phenomena. Most of the data he cites is highly contradictory (the mediums he advocates rejected reincarnation) and has been discussed before in countless other books. Carter ignores any evidence contrary to his beliefs — he chooses to disregard ectoplasm because it was discovered in seance rooms to be the result of fraud made of butter, muslin, plastic dolls or newspaper clippings. He also rejects the psychological evidence for mediumship.

on many occasions, but what he does not mention is that Broad was very critical towards some paranormal phenomena and rejected much of it. He does the same to many other scientists or researchers who have studied the paranormal, and by doing this paints a false picture of many of these scientists to his readers that they were actually believers in all paranormal phenomena. His books are also filled with arguments from authority.