From RationalWiki
(Redirected from Chelation)
Jump to navigation Jump to search

Chelation therapy is either 1) a legitimate medical treatment for diagnosed heavy metal poisoning, or 2) a pseudoscientific practice whereby certain substances (usually EDTA or deferoxamine) are administered to a patient to "clear them of toxins".

In chemistry, "coordination" is the formation of a relatively weak bond between a metal ion and another substance called a "ligand" to form a "coordination complex". "Chelation" is a type of coordination where the ligand has multiple sites ("teeth") with which to bind to the metal, which makes the complex significantly more stable.[1] A commonly encountered chelating agent is citric acid, which is a useful rust remover owing to its ability to chelate to iron. Chelation therapy is medically useful in heavy metal poisoning when the coordination complex is less toxic or more easily eliminated than the metal itself. It is indicated for lead, arsenic, mercury and copper poisoning, and poisoning by Lewisite, a chemical warfare agent developed for use in World War I, which was the original indication it was developed for.[2][3] However, chelation therapy is rarely used in legitimate medicine, as actual heavy metal poisonings are quite rare. Real chelation therapy is not benign, as it can also remove vital trace elements from the body, and requires medical supervision.

Chelation therapy has seen a lot of pseudoscientific off-label use. The usual claim is that it can treat atherosclerosis. The claim behind pseudoscientific chelation therapy is that the chelator binds "bad stuff" in the body, and then it is harmlessly excreted, but the "bad stuff poisoning" is not diagnosed; nobody runs an ICP-AES analysis of the patient's urine (before, during and after therapy, as required) to detect any badstuffium in it.

Under pressure from quacks, NCCAM ran a large trial of chelation for heart disease (the TACT trial). Despite including convicted felons and others chosen as being likely to provide evidence supportive of chelation, this entirely failed to support the claims made by quacks.

Claims for chelation therapy vary greatly. The most common claim is that it can treat atherosclerosis (the hardening of the arteries that leads to heart attacks and strokes). For example, "Holisticonline.com" states that:

Studies by the National Academy of Sciences/National Research Council in the late 1960's indicated that EDTA was considered possibly effective in the treatment of occlusive vascular disorders caused by arteriosclerosis.[4]

It is unlikely that they will change this comment even after the publication of the TACT trial which provides no support for this tentative conclusion.

There have also been claims about potential benefits of the use of chelation therapies in the treatment of autism. This claim is disputed by numerous physicians, including Dr. Eric Fombonne, the Director of Pediatric Psychiatry at the Montreal Children's Hospital, saying "…chelation therapies, whereby heavy metals are removed from the body using specific compounds, are not useful in the treatment of autism."[5]

Since there is little data to support their claims, practitioners will often resort to logical fallacies such as the argument from authority and to various types of salesmanship.[6] 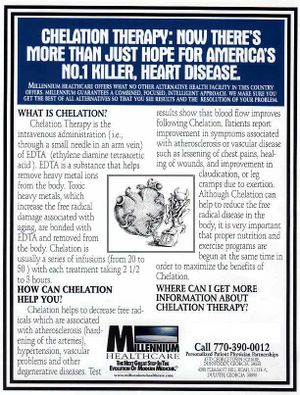 Typical ad for chelation therapy; these claims are flatly contradicted by the outcome of the TACT trial

The cost, typically $75 to $125 per treatment, is not covered by most insurance companies;[7] however, practitioners have been reported to misrepresent the reasons for the therapy, stating heavy metal poisoning. This has led to insurance fraud prosecution.[7]

For any medical treatment to be widely accepted, it must be proved safe and effective. For any scientific or medical theory to be taken seriously, there must be a plausible mechanism of action for any observed positive effects. No plausible theories of efficacy of chelation therapy have been proposed.[7] The research usually cited by practitioners was done over 40 years ago and had decidedly negative results: "At the time of the report, 12 of the 38 [subjects] had died".[7] At that time, the only treatment for heart disease was bedrest and sedatives. Medical science has advanced considerably in the intervening decades. Modern studies of chelation therapy have been done and are ongoing. These studies have shown limited or no efficacy for chelation therapy for atherosclerosis.[8][9][10][11][12][13][14]

There has been evidence of harm from chelation therapy, but no large scale trials have been done, and practitioners are not required to report adverse events.[15] The N.I.H conducted a five-year trial of chelation therapy in 633 patients with diabetes mellitus and a history of cardiac infarct, reporting in 2013.[16] The conclusion was:

Post-myocardial infarction patients with diabetes mellitus aged ≤50 demonstrated a marked reduction in cardiovascular events with EDTA chelation. These findings support efforts to replicate these findings and define the mechanisms of benefit. However, they do not constitute sufficient evidence to indicate the routine use of chelation therapy for all post-myocardial infarction patients with diabetes mellitus.

Tireless woo-enablers NCCAM, ably assisted by woo-industry lobbyists, launched a clinical trial into chelation for heart disease under the name TACT. This was denounced as unethical, given the lack of prior plausibility.[17] It was found that the trial was using dubious "alternative" centers, that some of the investigators were convicted felons, and that there were numerous other irregularities, including lying to patients on consent forms. The results turned out to be equivocal, with each individual primary outcome falling below the pre-defined level of significance and only a combined score providing weak support in some measures, tainted by unusually high dropout rates especially among the placebo arm (a probable sign of a failure of blinding). Quack claims of massive benefit in coronary patients, including avoiding coronary artery bypass grafting (CABG) are unequivocally not supported by these findings, but it can be confidently predicted that this weak and equivocal outcome will be trumpeted by quacks as support for chelation.[18][19]

The autism/vaccine link hysteria has led many to claim that mercury poisoning is the cause of autism. Several opportunists have decided to latch onto this movement and the hype surrounding chelation therapy and claim that it can remove the mercury and "cure" autism. Just as with all the other applications, there is no evidence at all that chelation therapy has an effect on autism — in fact, the evidence goes the other way.[20][21] (Stabbing someone with a giant needle, and possibly pinning them down in order to do so, isn't exactly great for their mental health.) The primary proponents of this "therapy" are Rashid Buttar, Mark Geier, and David Geier.

Chelation therapy for autism is particularly horrific since it involves the intravenous injection of dangerous chemicals into a person who 1) may be unable to consent or even understand what's happening, 2) may be highly sensitive to pain,[22] and 3) is more likely to become traumatized after a stressful experience[23] (so doing an optional invasive procedure is a particularly bad idea). Buttar has also stated that he has the most "success" with children under 9 years old, so there are multiple levels of consent issues.[24]

Chelation therapy involves lethal risks. In August 2005, a 5 year old autistic boy named Abubakar Tariq Nadama died while receiving his therapy.[25] Roy Kerry, the doctor overseeing Nadama's treatment, was sued for using chelation therapy to treat autism,[26] and his license to practise medicine was suspended. He has been barred from chelating minors in the future.[27]

If you hate your kid so much that you'd risk their life rather than continuing to put up with them being autistic, you'd be better off giving them up to Child Protection Services.

Even as a treatment of acute metal poisoning, chelation therapy should be monitored by a physician, because a chelating agent will indiscriminately remove all sorts of metals from the body, including essential elements. This can cause the loss of calcium, zinc and copper, toxicity to kidneys and even death.[28] Such side effects are acceptable only when faced with a potentially fatal, acute poisoning. Even so, the chelating agent should be administered promptly, within hours, for it to be effective. Evidence is lacking for its effectiveness in chronic poisoning.[29]

Patients cannot be blamed for seeking help from those who offer it. Harm from these types of therapies cannot be measured only in the harm done by the treatment itself. Atherosclerotic heart disease (ASHD) is a very serious illness, and the advancements in its prevention and treatment have been incredible. If patients forgo standard, proven treatments for patent medicines, the disease will follow its natural course and lead to early death or disability.