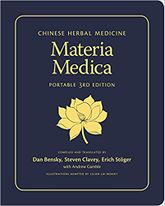 Cover of the 3rd edition

Chinese Herbal Medicine: Materia Medica (CHMMM) is a popular and encyclopedic reference book on materials used in traditional Chinese medicine (TCM). As of 2020, it is in its 3rd edition.[1] The title is a bit of a misnomer because while the book mainly includes herbal substances, it also includes animal, mineral and fungal substances.

Entries have sections on:

Notably lacking are references giving any evidence of claims. The only bibliographic entries are those used for translation.[1]:1173-1176 A significant failing of the 3rd edition is that it removed the "Pharmacological & Clinical Research" section from each entry that previously appeared in the 2nd edition.[2][3] The authors' explanation for removing these sections is that:[1]:x

While the authors do cite other other publications that cover these areas of knowledge (The Pharmacology of Chinese Herbs,[4] Pharmacology and Applications of Chinese Materia Medica,[5] and Chinese Materia Medica: Chemistry, Pharmacology and Applications[6]),[1]:x the absence indicates that CHMMM is not evidence-based medicine. While safety issues are generally covered, efficacy is not — rather, the alleged efficacy of a given substance is based on largely pre-scientific Chinese herbal texts (appeal to ancient wisdom and argument from authority).

What the authors did not explain is the reason for this consistency was due to the Chinese Communist Party's (CCP) doctrine on Western and Chinese medicine during the mid-1950s to mid-1960s, in which Chinese medicine became standardized, resolving or glossing over the contradictory elements of the four ancient texts.[10]:79,127,142 The authors likely did not know this because a history of TCM in communist China[10] was not published until a year after the 3rd edition of CHMMM.

The authors' wholesale acceptance of "basic actions of the herbs in modern materia medica texts" is not a trivial issue because:

A significant change to the 3rd edition was the inclusion of an "Obsolete Substances" chapter, which segregated two types of substances from the main body of the book, those substances with unacceptable toxicity,[1]:1045-1064 and those that are derived from endangered species (based on CITES Appendices I and II).[1]:1064-1071 CITES Appendix I lists the most endangered species, banned from international trade, and CITES Appendix II lists species that are less threatened and still allowed in trade.[11] is Unfortunately, the alleged actions and indications are still described for each substance as well as methods of preparation; this could be tempting for the unscrupulous or inattentive practitioner. Also unfortunate is that because of the authors' admitted lack of expertise in pharmacology, and the removal of the pharmacology and clinical research sections, one is left wondering whether the authors had insufficient knowledge to judge whether more substances should have been added to this chapter. The unacceptably toxic substances listed in the 3rd edition are:[1]:1044

Rhinoceros horn is listed separately as a substance that should no longer be used due to its endangered status.[1]:118-120,1064 Also, several substances were under consideration for listing in CITES Appendix II at the time of publication of the 3rd edition:[1]:xxxi

For some listings in the substances with unacceptable toxicity, substances are not treated uniformly. The authors clearly state that some should not be used, e.g., by stating "…should be regarded as an obsolete drug" or "…it is the editors' view that it should no longer be used" (Aristolochia manshuriensis,[1]:1056 calomel,[1]:1059-1060 lithargyrum,[1]:1062 and borax[1]:1064), though preparation information is still given in some cases.

See the main article on this topic: Aristolochia

The authors treat several species of Aristolochia differently with regard to toxicity even though the primary issue of toxicity for all species of Aristolochia is that it causes acute kidney cancer and rapid-onset cancer. This was reported conclusively by the International Agency for Research on Cancer in 2002,[13]:118 two years before the 3rd edition of CHMMM was published, with the first report of toxicity in 1994.[14]

For mǎ dōu líng (A. debilis or A. contorta), the authors did not state that these plants contains aristolochic acid (AA) or that the plants are carcinogenic.[1]:1053-1054

For guǎng fáng jí (A. fangchi), the authors adequately described the nature of its toxicity, but as noted above, did not definitively say that the plant should not be used.[1]:1056-1057

For xún gǚ fēng (A. mollissima), the authors state, "This substance is toxic, due in part to its AA content, which is nephrotoxic and possibly carcinogenic."[1]:1057-1058 The authors should have instead stated that the plant is a carcinogen, not that it is possibly a carcinogen.

Due to the the nature of TCM, plants with similar Chinese names are allowed to be substituted for each other. Thus all plants with mù tōng, mù xiāng fáng jí in their name may be substituted for each other, whether or not they are Aristolochia species.[13]:69-70 It is therefore rather risky to consume such plants without there having been a chemical analysis on them to test for AA. These plants are: Stephania tetandra, Cocculus trilobus, C. orbiculatus, Clematis armandii, C. montana, Akebia quinata, A. trifoliata, Aucklandia lappa, Inula helenium, I. racemosa, and Vladimiria souliei.[13]:69-70

The authors do discuss the substituent problem, both specifically with regard to Aristolochia[1]:xxii and more generally:[1]:xxii

The two problems with this statement:

Asarum heterotropoides and A. sieboldii (xì xīn) are in the Aristolochiaceae family, as is the Aristolochia genus. Asarum species only contain trace levels of AA,[13]:83 but cases of aristolochic acid nephropathy due to Asarum consumption have been reported in a few incidences.[15] The authors did not report on AA,[1]:27-30 and the report on AA nephropathy was published after the 3rd edition of CHMMM.

The authors did not give any toxicity information for betelnut (bīng láng).[1]:1008-1010 Betelnut causes a variety of toxic effects and is a human carcinogen.[16]