Consanguineous marriage is a union between couples who are related as second cousins or closer.[1] 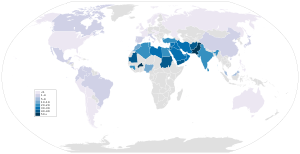 Prevalence of marriages up to and including distance of second-degree cousin in 2012.[2]

In Pakistan, consanguineous marriage is reported to be higher than 60% of the population in 2014.[3] Also, BBC reports that an estimate of at least 55% of British Pakistanis are married to first cousins, and that British Pakistanis are 13 times more likely to have children with genetic disorders than the general population. They account for just over 3% of all births but have just under a third of all British children with such illnesses.[4]

In Afghanistan, the proportion of consanguineous marriages is estimated to be 46.2%, ranging from 38.2% in Kabul province to 51.2% in Bamyan province.[5]

In Sudan, the overall percentage of consanguinity range is estimated to be more than 44%.[6] By country, Sudan has the highest level of birth defects.[7]

Saudi Arabia reportedly has the highest rate of consanguine marriages in the world with 56% of all marriages consanguine and 33.6% between first cousins.[8]

While Italy as a whole has low rates of consanguine marriages, the late geneticist Luigi Luca Cavalli-Sforza published detailed work, based on both blood typing and parish records, showing relatively high rates of consanguinity on Sardinia and Sicily, and locally in remote pockets of mainland Italy.[9]

A 2013 study cited high rates of single-gene diseases in the Eastern Mediterranean due to cultural practices.[10]

Consanguine marriages are often the consequence of arranged marriages. For example, in Pakistan and Bangladesh, marriages are typically arranged by relatives and there is a strong preference for consanguineous marriage.[11]

It has been suggested that consanguinity may be a relatively cheaper way for families to deal with the problem of dowry costs in rural marriage markets, that is, more stringent credit constraints and lower wealth levels will lead to lower dowry payments and a higher prevalence of consanguineous marriages.[12]

In Catholicism, marriage is invalid between persons related by consanguinity in all degrees of the direct line and that in the collateral line, marriage is invalid up to and including the fourth degree. In particular, first cousins cannot marry in the Catholic Church. However, this last rule is seen more as an "ecclesiastical law" instead of a "divine law", and a special dispensation permits two first cousins to marry validly in the Catholic Church.[16]

Consanguineous marriage is widely favoured in a large majority of the world's Islamic populations.[17] In particular, many Arab countries display some of the highest rates of consanguineous marriages in the world ranging around 20-50% of all marriages, and specifically favoring first cousin marriages with average rates of about 20-30%.[6] In Islam marriages between first cousins are not forbidden.[18] Two additional factors specifically apply in Islamic society: the belief that in contracting a first cousin marriage of the type father's brother's daughter, the marriage partners benefit from the comparability in status of their respective fathers, and the fact that two of the wives chosen by Muhammad were biological relatives, and he also married his daughter Fatima to Ali, who was his ward, with the son of his paternal uncle.[19]

While Leviticus lists a number of prohibited sexual relationships, first-cousin marriages and beyond are not among them. Until the 20th century, cousin marriages were common among Jewish people.[20]

Consanguineous marriage increases a couple's chance of both carrying the same recessive disease variant and affecting their children. The effect is particularly marked for rare disorders, because a carrier is unlikely to find a partner who carries the same disorder unless they are related. Consequently, in communities in which consanguineous marriage is common, there is an increased birth prevalence of many rare recessive conditions, and a significant increase in the total birth prevalence of congenital and genetic disorders.[1]

In populations with a high rate of consanguinity, there is a significant increase in the prevalence of common adult diseases like cancer, mental disorders, heart diseases, gastro-intestinal disorders, hypertension and hearing deficit.[21]

A 2018 study on 363.960 individuals born in Northern Ireland shows that being a child of consanguineous parents is associated with having an increased likelihood of psychotropic medication use in adulthood. Precisely, children of first-cousin consanguineous parents are more than 3 times as likely to receive medications for common mood disorders and more than twice as likely to receive medications for psychoses compared with children of unrelated parents.[22] Also, a positive correlation between consanguinity and schizophrenia has been observed.[23][24][25]