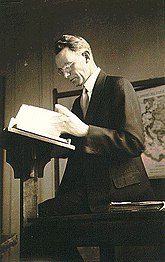 "Eureka! If I only use circular reasoning, I can draw attention away from the Bible's contradictions by claiming my argument structure proves internal consistency! Then I can use my theist presuppositions to twist the 'implications of atheism' until they *gasp* become SELF-REFUTING! Then I've proven my magical friend exists! BEGONE, FOOLISH UNBELIEVERS! REPENT! BE SAVED! " (Yes, this is actually how presup works.)

Cornelius Van Til (1895–1987) was a Dutch-American Calvinist philosopher and the founder of presuppositional apologetics. If you're wondering why those annoying Sye-clones are screaming damnation at you over the Internet, he's the one to blame.

Van Til wrote over 39 works.[1] These works were instrumental in developing modern presuppositional apologetics. He claimed that a neutral starting point presupposes atheism, an interesting argument that can, in fact, be used to argue for atheism, likely inspired by Matthew 12.30. He then used scare tactics and special pleading to explain why he was allowed to use circular reasononing, all while claiming that teaching childen to have an open mind is somehow "indoctrination". However, since Van Til admitted that neutral presuppositions necessarily lead to atheism, he, ironically, proved that valid proofs of atheism do, in fact, exist, and that atheism is true, and cannot be denied except by the use of logical fallacies.[2] Van Til similarly engaged in redefining philosophical terms into ones with wholly new meanings in order for them to support his position, and was fond of alternatively criticizing and misquoting religious leaders he claimed to follow in the footsteps in, such as John Calvin, for various self-serving reasons.[3] He deliberately made his writings incomprehensible, likely as an attempt to make them harder to understand and thus to refute. In a similar manner, he deceitfully rebuffed efforts to reduce his arguments to comprehensible syllogisms.[4] For some reason, this habit of his has actually contributed to his popularity among Christian apologists, likely because they believe that any argument that cannot be refuted is a good one, even if nobody can understand it.[5]

Due to Van Til's status as the founder of the discipline, he had an immense influence on presuppositional apologetics. His students, such as Greg Bahnsen

, were the leaders of the ideology for decades after Van Til's death. He developed the viciously"virtuously" circular arguments that form the mainstays of that field.

Van Til's argument is based off the idea that reasoning is impossible without God. However, no evidence is given for that position -it is simply stated. When that failed in persuading the skeptic, Van Til turned to repeating his claims over and over again and repeated circling through logic chains. Van Til's "evidence" for such a statement is "provided" by the presupper by "assuming the contrary" while not actually doing so.[6] It attempts to state that all other ideas are self-refuting, using the exact same framework. However, when anyone inconveniently points out the contradictions inherent in Christianity (generally in the realms of the Trinity and Biblical internal consistency), the standard presup approach is to refuse to discuss the parts in question.[7] In fact, Van Til and his successors reject approaches such as trying to resolve these contradictions as "unbiblical", with one prominent one attempting to use a comparison with a gun to ridicule those who do so.[8] Even the normally batshit crazy pastor Matt Walsh called him out on this.[9]
Some additional problems with this analogy are:

Van Til, on the other hand, would doubtless have applauded that accomplished student of his. In fact, he used a similar argument by claiming that it was irrelevant that his argument was circular because it was a "worldview" and the arguments of others allegedly were as well.[10]

Ways Van Til actually proved the existence of God[edit]