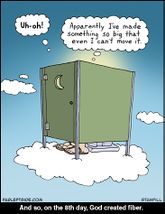 Well potty breaks had to come from somewhere, right?

Creation Week is the week in which (as Biblical literalists believe) God created all that exists. The first two chapters of the book of Genesis recount two versions of the process. According to the first version[1] of the Judeo-Christian creation, the work took place over six literal days, and began possibly on the evening before October 23, 4004 BCE with the seventh day declared a day of rest.[note 1] No timescale is given for the second version[2]. As Biblical literalists have a fondness for the King James version, all references here are to that edition.

Perhaps owing to its placement at the beginning of the Book of Genesis and its role as a creation story for the Abrahamic religions, the account of God creating the world in a week has become one of the better-known parts of the Bible. However, the story—if taken literally—is incompatible with a vast preponderance of paleontological findings, and this has led to considerable disagreement between Young Earth Creationists and scientists.

You might think that the existence of two contradictory creation myths would cause a problem for believers in full Biblical literalism and for young-Earth creationists - it's practically the running joke of Biblical literalism. They seem to have no problem with it, as long as you accept at least one version. Those who take the accounts allegorically clearly don't have any such problem.

Apologists do exist who attempt to reconcile these two contradictory accounts. Since ancient Hebrew didn't distinguish between the simple past tense and the pluperfect tense, they choose to render Genesis 2:19 as "Now God had formed out of the ground all the wild animals and all the birds in the sky," implying that this act had already taken place before Adam was created, back in verse 7. This is kind of hard to swallow, considering that in verse 18 God said "I will make a helper suitable for him" and then Adam searched for a helper among the animals in verses 19 and 20, implying that God decided to create the animals after Adam already existed so that he'd have a pool of potential helpers to choose from. The Bible does also seem to have a certain form corresponding to pluperfect; notably used at the beginning of Genesis 39 (40 in Hebrew), where "Joseph had been taken down to Egypt" - but it seems to be absent in this case.

Meanwhile, legitimate Biblical scholars seem to view it as a curiosity that might show how the Bible was written. The addition of chapter and verse numbers to the Bible was a recent invention. While sections, chapters, and divisions were often used; the standard version of which we see used in modern Bible editions were only invented sometime during the 13th century by Bishop Stephen Langton

.[3] Even then, it wasn't until the 19th Century that Genesis 1 and Genesis 2 were really considered "separate."

In fact, in the original languages, the names used for God differed between the two contradictory stories[note 2], indicating with near certainty different origins for the stories. Genesis 1 seems to be heavily influenced by Mesopotamian or Egyptian mythology - Mesopotamia and Egypt are both regions where life is connected to the annual overflow and receding of large rivers, and Genesis 1 describes a flooded earth from which the water recedes in order to make life possible. Genesis 2, however, seems to be influenced by local mythology, since it states that the land was barren because there was no rain, and Canaan is one place in the Old Testament world where rain is important. In the so-called "framework interpretation",[4] the second story may be considered as close to a literal narrative as necessary, while the first is a priestly account of creation used to emphasize the Sabbath and God's involvement with the creation of the world. The followers of this interpretation would claim that this resolves conflict with science because they claim the literal seven days are an allegorical account; young-earth creationists reject this for precisely that reason.

Though the formal grammar and structure of the whole Genesis account may fit the genre of a history, artistic metaphor intrudes (lights ruling day and night (Genesis 1:16), for example, humans gaining "dominion" over the "natural" world, and man in the image of God (Genesis 1:26)) and the structural patterns of Hebrew poetry break into the narrative story, as in Genesis 1:27:

And Adam said,
This is now bone of my bones
and flesh of my flesh;
she shall be called Woman
because she was taken out of Man.

"History" here does not refer to genuine history, but rather an oral tradition suffused with mythical elements and literary word-play in an esthetic literary structure.