From RationalWiki
(Redirected from David Koresh)
Jump to: navigation, search 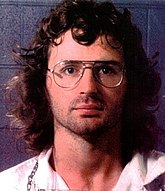 David Koresh, a self-styled messiah, led a small cult called the Branch Davidians in a compound just outside of Wacko Waco, Texas, a splinter of the Seventh Day Adventists with interests in the miraculous revival of the dead (a.k.a. "the power") and physical presence in Israel/Palestine at the time of the Second Coming. Koresh was in many ways the European image of the quintessential contemporary American: a heretical Christian, an anti-government gun nut, and set on going his own way. Statistically, he was not a typical American but stereotyping is just too much fun.

These events—a bungled arrest, a siege, and a subsequent disastrous fire—are fodder for conspiracy theorists. The word "Waco" has become synonymous with an epic disaster on the part of federal law enforcement.

For Koresh and his followers, the contents of his gun collection overstepped the bounds of what is legal, even in the U.S. This meant automatic weaponry and explosives, among other items that violated the 1934 National Firearms Act. Locals had heard fully automatic fire from AR-15s, and a UPS driver had reported black powder and grenade casings inside a broken package that had some other legal and illegal gun parts. This brought the attention, ire, and wrath of the federal Bureau of Alcohol, Tobacco, Firearms and Explosives (ATF) down on him. He also exhibited sexual predation, with him having been in relationships with underaged girls.[1]

The ATF made a terrible tactical error, and instead of doing the sensible thing and asking the local sheriff what supermarket they could probably pick Koresh up at, they stealthily breached the compound one "night" at 9:45 AM. Not helping things was the fact that the media had been tipped off about the raid and a random journalist asked someone for directions to Mount Caramel so he could cover the events to come. That someone happened to be a Branch Davidian very high up on the totem pole who just happened to be out and about in public, who then immediately tipped off Koresh, giving the group ample time to prepare for the raid. When the ATF learned of this, instead of doing the other sensible thing and calling the raid off due to losing any element of surprise, the ATF went ahead as scheduled. Seriously. Koresh and his buddies then did the natural thing when encountering intruders on private property in Texas: they shot them. Now that there were dead cops in the story, things got out of control.

A siege was initiated on February 28th, 1993. For 51 days, while the nation was transfixed by the story of the cop-killer, the feds set up various attempts to drive Koresh and his followers out of the compound. Loud music was blared at them. Bad movies saturated their cable stations. Demands for surrender were blared through loudhailers. 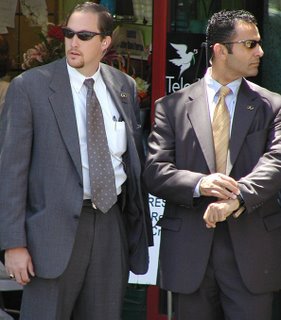 Some typical jack-booted thugs. Your tax dollars at work!

At the time, the Attorney General was Janet Reno (named for the "biggest little city in America"). Since wingnuts hated anything Clinton and anything gun control, she was demonized for bungling the confrontation, and the term "jack-booted thug" became popular with some talk radio hosts to refer to government employees (specifically, those under Democratic administrations). While they may not have been willing to actually side with Koresh,[note 3] they sure weren't on Reno's or the federal government's side.

Various investigations and court cases attempted to figure out what had happened before and during the siege. Questions included who shot first in the initial encounter and who had started the fatal fire. Were the mysterious flashes seen on film of the final assault produced by incendiary weapons, gunshots, or reflected sunlight?

Some people believe that David Koresh's main cause was a refusal to pay income taxes, thus making him a hero to the right-wing loony fringe.

The incident was one of the influences that inspired the rabid anti-government philosophy of Timothy McVeigh and Terry Nichols which led to their bombing of the Federal Building in Oklahoma City, resulting in the deaths of 168 people, on the anniversary of the deaths which occurred there (great, more death). McVeigh had visited Waco during the standoff, later returning numerous times (including before the bombing) and had spoken out in anger at the government siege.

South Park references the incident in the episode "Two Guys Naked In A Hot Tub."

The IDM duo Boards of Canada frequently referenced the cult in their 2000 EP "A Beautiful Place Out In The Country", their 2002 album "Geogaddi" and on several of their remixes before 2005.