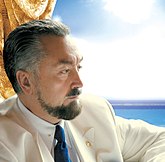 Harun Yahya is the pseudonym of Adnan Oktar (1956–), a Turkish religious cult leader, criminal, and prolific author and videographer of Islamic creationist works. His stance switches between old earth creationism and young earth depending on the circumstances. [note 1][1] Yahya has made anti-Semitic statements, is (unsurprisingly) a Holocaust denialist, and has been convicted of using his advocacy organisation for criminal purposes.[2] He has written over 200 books[3] on various topics, including one in 2006, Atlas of Creation, which attempts to damn evolution by demonstrating that various species are unchanged from their fossil ancestors. Unfortunately he fails at this due to being unable to differentiate (for instance) sea snakes from eels, salamanders from frogs and flies from fishing lures![note 2] At least we can agree that fishing lures were created and did not evolve from live bait. We could even say that ones that get the job done very well are intelligently designed.[4] In addition to his books Yahya not only has 163 websites[5] devoted to pushing his views, but also apps for the iPad, iPhone, Android, iBooks, Kindle, Nook, Kobo and Blackberry.[6]

Yahya has been diagnosed as having paranoid schizophrenia,[4] which would shed light on why he's acting like he's Imam Mahdi.

So convinced is he of his rightness that he sent numerous free copies of Atlas of Creation to renowned zoologists and biologists worldwide. One of the "lucky" recipients was Richard Dawkins, who reviews the tome in a less than flattering light.[7] PZ Myers also analysed his copy.[8]

In August 2008 he succeeded in getting Dawkins' website banned in Turkey.[9]

A creationist video produced by Yahya was reported to be part of the Youngstown, Ohio public school curriculum as of May 2016, in violation of the separation of church and state.[10][11]

He has mailed copies of his book to schools in many European countries and is referred to many times in a document entitled The dangers of creationism in education produced by the Council of Europe. Specific mentions of some of his errors are made in this document.

Harun Yahya's attempts at positive arguments for creationism all seem to fall into much the same pattern.

He varies this formula very little, though occasionally he skips straight from step one to step three without bothering with step two.[15]

The advantage of this method is that he can spend 90% of each essay copying out things which are actually true, which is a great way to pad out his essays, books, and DVDs. He requires only one lie — the huge, preposterous pretense that the theory of evolution ascribes the order and complexity of the natural world to "coincidences". This flimsy, clumsy misrepresentation of evolution can indeed be blown away by more or less any fact about the natural world. To quote the biologist and science advocate Richard Dawkins:

Besides attempts at the argument from design, Harun Yahya comes out with the usual creationist nonsense about intermediate forms, the standard pretense that "evolution is a religion",[16] the popular creationist myth that creationists are gaining ground[17] and the usual sorry ritual of blaming evolution for social Darwinism, for Nazism, for communism, and in a feat of chutzpah unusual even in a creationist, for terrorism.[18] As this is the same stuff that every other creationist repeats, we presume that it is not the result of independent thought, but of copying off Christian fundamentalists and changing the word "Jesus" or "God" to "Allah" where necessary. As there is nothing original or even unusual in the arguments he recites, the reader will find all of his arguments listed, and debunked, in our list of creationist claims.

The one disadvantage of Yahya's technique that is it is wholly unoriginal. He bases his arguments off of the creationist lies used over and over again; anyone who spends five minutes finding out what the theory of evolution actually is will realize that Yahya's essays are deceitful rubbish. Presumably he's betting on his followers lacking the intellectual integrity or curiosity to spend five minutes with a biology textbook — and, sadly, it appears that this gamble has paid off.

In September 2008 he offered[19] to pay out "10 trillion Turkish Lira[20] to anyone who produces a single intermediate-form fossil demonstrating evolution" — he should bring his chequebook and take a trip to Lyme Regis for a day's ammonite hunting. Though considering he wouldn't know a transitional form if it got up, tap danced and whacked him on the head with its half-formed turtle shell or bit his nuts with its dinosaur-like teeth and bird-based beak, don't expect to see the money any time soon.

The cult leader and the sex[edit]

While Yahya/Oktar has been accused of running an Islamic apocalyptic sex cult,[21] it's unclear whether his cult is a sex cult as such, or simply uses sex alongside its conspicuous display of wealth to lure in new converts. The sexualized imagery includes having the cult's attractive women address Yahya as the Mahdi and constantly fawn over him. In a more ominous tactic the cult's women were also used to lure wealthy men into, *ahem*, compromising positions which would then be used for blackmail. How this is acceptable religious behavior is beyond us. He was arrested for this but initially acquitted in 2000. However, he was eventually convicted and sentenced to three years' imprisonment in 2008. He is — obviously — appealing (or fairly unappealing depending on your point of view) and has been ordering his disciples to use sexualized imagery when trawling for converts since the 1990s.[22] This imagery along with the bling-bling style of Yahya's TV performances is extremely odd, considering his cult's religious origins in conservative Islam and its rants against modern "decadence". It is perhaps best seen as an Islamic parallel to the prosperity gospel (which sits just as awkwardly within Christianity), combined with the simple marketing strategy that "sex sells". Other parallels (in recruiting and organizational techniques) possibly inspiring Yahya include "Charles Manson and Jim Jones, and in particular … the Moonies, the Bhagwan Shree Rajneesh and Scientology."[4] Once you go beyond the glitzy wrapping, however, Yahya's sect looks more like an apocalyptic personality cult, strictly controlled by its "guru".

In 2018, Turkey issued 235 arrest warrants for Yahya and his followers.[23] As of July 11, 78 people had been arrested, including Yahya.[23] The charges include fraud, sexual assault, and military espionage.[23] Given the increasing autocracy within Turkey, it is difficult to ascertain whether these are valid charges or a crackdown on viewpoints that do not follow Recep Tayyip Erdoğan's official views.

On January 11, 2021, Yahya was reportedly sentenced to 1,075 years in jail for his religious cult whose members have been accused of committing sexual crimes, blackmail, money laundering and espionage.[24]

Even a numpty such as Yahya can sometimes be right. In the aftermath of 9/11 he had his stopped clock moment with a book called Islam is Not Terrorism.