The Isha Institute of Inner Sciences, headed by Jaggi Vasudev (called Sadhguru or "The Mystic"), is described as:

"an exploitative cult and The Mystic deserves his fair share of atheist vitriol. He makes his members swear to secrecy, charges a small fortune for their enlightenment, brainwashes them and dupes them into free work under the guise of volunteerism. One follower described being forced to work ten hours a day, seven days a week, given nothing but a straw mat to sleep on. Which sounds neither spiritually enlightening or particularly legal."[1]

For good measure, Sadhguru turned Madhguru has been accused of murdering his wife.[1] 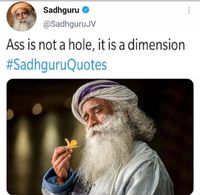 Infinite dimensions.[2]
See the main articles on this topic: New age and Deepity

If you were looking for 11 minutes of advertisement-grade pictures in a glorified slideshow with vaguely uplifting music in the background, just watch the channel introduction.[8]

Aside from that particular word salad being so spicy as to put Deepak Chopra to shame, it's worth pointing out — since the good guru himself decided to bring up logic — that: saying that the drop is a part of the ocean while the ocean is also part of the drop violates both the law of identity

and the first postulates of set theory.

Inner Engineering is a spiritual program, one of the biggest products of the Isha Foundation. As IshaYoga.org explains...

Inner Engineering is offered as an intensive program for personal growth. The program and its environment establish the possibility to explore the higher dimensions of life and offer tools to engineer oneself through the inner science of yoga. Using these, people can optimize all aspects of health, inner growth and success. For those seeking professional and personal excellence, this program offers keys for meaningful and fulfilling relationships at work, home, community, and most importantly, within one's self. Inner Engineering can be thought of as a synthesis of holistic sciences. It helps participants establish an inner foundation and vision for all dimensions of life and find the necessary balance between the challenges of a hectic career and the inner longing for peace and wellbeing. The approach is a modern antidote to stress, and presents simple but powerful processes from yogic science to purify the system and increase health and inner wellbeing. The program includes guided meditations and transmission of the sacred Shambhavi Mahamudra, which, once learnt, can be practiced regularly at home.[11]

If you read that and still don't know what Inner Engineering is, don't worry — it's just standard babble about how meditating (and buying Sadhguru's course) will fix all your problems. Listed health benefits include:[11]

If that sounds like promises to cure incurable diseases plus vague promises of improved mental state, then you're absolutely right.

Vasudev is one of the main propagandist of Narendra Modi's government. He constantly argues that he and his organisation are non-political, although this claim doesn’t stand to scrutiny.

In 2019, he released a video supporting the new law implemented by the BJP Government that grants citizenship based on religion. The video which was tweeted by Modi himself contained false numbers concerning the Hindu population of Pakistan and Bangladesh and countless false claims to get the sympathy of Hindus.[12] Ironically, he started the video by saying "I haven't read CAA (The name of the law) fully."[13] Isha Foundation's twitter account conducted a poll asking 'Whether the protests were Justified?' which was deleted after the poll results turned out to be not in favor of the Government.[14]

In 2021, he criticised Rihanna, Greta Thunberg, Meena Harris, Mia Khalifa, Jay Sean, and other global celebrities’ comments on the undemocratic suppression of the farmers protest by saying “It is important to understand #celebrity status in the world does not give you an understanding of internal situations of a nation. India has a democratically elected govt with all the necessary systems to address its internal issues. We don’t need your help.”[15] Meanwhile, he was himself lecturing America on racial inequality during the BLM movement.[16] Just a few months before the protests, he also (ironically) said:

If we want to establish human rights across the planet, we need to start thinking beyond national boundaries. Everyone should have the same rights and face the same justice system.[17]

Vasudev, like most other new age gurus, has not been afraid to dip his toes in pseudoscience to further his spiritual money-making racket. To do this, he constantly strawmans the philosophy of science to suggest spirituality as an alternative to finding the truth.[18]