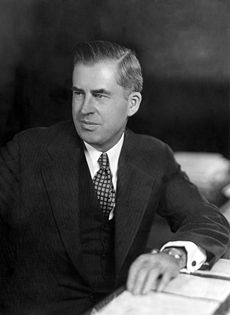 Wallace looking at something interesting.

Henry Agard "Loony Toons" Wallace (1888–1965) was the Vice President of the United States during Franklin D. Roosevelt's third term as president, from 1941 to 1945. He was also the secretary of Agriculture from 1933 to 1940, for most of Roosevelt's first two terms, then led the Commerce Department briefly under Roosevelt and Harry S. Truman after he was circulated out as VP; Truman fired him in 1946.

Wallace was relatively intelligent, absurdly liberal for his day (opposing segregation and sex discrimination in the era when half the Democratic Party voted down a federal anti-lynching bill) ... and just a little bit of a kook. His downfall was ultimately a result of anti-Asian racism, red-baiting, and back-room jockeying.

After a long and public pro-Soviet record during the war, the Democratic Party bosses decided they wanted to slide into the VP seat a more hardline figure: Harry Truman. After FDR dropped dead, Truman inherited an alliance with Joseph Stalin, which soon broke down.

Not having been in the right place at the right time to slide into the White House, in 1945, he ran as a third-party candidate for president in 1948 as a Progressive Party candidate against Truman, Thomas Dewey (a liberal Republican), and Strom Thurmond (a Dixiecrat). He and Thurmond got about 2% each of the popular vote, which didn't keep Truman from winning. Wallace ran to the left of Truman, in part against the Cold War and the emerging new Red Scare. Other parts of his program included universal health care, a minimum wage, nationalizing the energy industry, and more regulations on most other industries. The Communist Party USA endorsed Wallace in a "popular front" strategy that year rather than run their own candidate.

Wallace was also into all sorts of nonsensical bullshit. In a twirly-whirly trip from Presbyterianism to Roman Catholicism before becoming a High Church Episcopalian Anglican, he got into the woo of a guru named Nicholas Roerich. His private correspondence with Roerich was made public by his enemies, and they were cynical enough to call him insane for wishing blessings from the wrong god in his salutations, while simultaneously invoking Jesus Christ being outlawed by the damned Commies.

This united States politics-related article is a stub.
You can help RationalWiki by expanding it.
Retrieved from "https://rationalwiki.org/w/index.php?title=Henry_A._Wallace&oldid=2477122"
Categories:
Hidden categories: