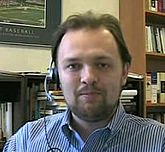 Ross "Chunky Reese Witherspoon" Douthat (1979–) is a conservative columnist for The New York Times, a position he earned by being safer than William Kristol.

Douthat attended Harvard from '98-'02, graduating with a concentration in history and literature. Douthat has written extensively about his time at Harvard; however, since using those sources entails reading Douthat's work,[1] his background remains a mystery to most.[2]

Douthat was a dedicated conservative even in college, a position that may have harmed his social life. Of course, his rampant self-absorption and apparent obsession with the film Gladiator probably didn't help.[3] Nor did his opinion pieces for The Harvard Crimson, which were an odd mix of articles on how awful Harvard and his peers were[4] and the occasional column arguing that everyone who didn't go to Harvard was a waste of skin.[5]

When the time came to write his first book - Privilege: Harvard and the Education of the Ruling Class - he chose to focus on the latter. However, that's a subject for another subheading.

Douthat worked at The Atlantic from 2002 to 2009, rising to the position of editor. He was also a blogger on the Atlantic website, wowing the world with his observations on the dishonesty of a black woman[6] and the unfair lack of Muslim villains in films.[7]

Douthat moved to the Op-Ed page of the Times in April 2009. His first column was entitled "Cheney For President." Make of that what you will.[8]

On the other hand, his op-ed in the wake of the Charlie Hebdo massacre in Paris is exactly spot-on.[9]

What does Reese Witherspoon have to do with anything?[edit]

Sometimes, a writer will pen something that will haunt him forever. Economist Brad DeLong managed to find such a passage deep in Privilege:

That passage went viral in the blogosphere. Today, anyone who pokes fun at Douthat is obligated to make a joke about it.[11]

A staunch Roman Catholic, Douthat is an outspoken opponent of same sex marriage[12] and of LGBT rights more generally,[13] and frequently writes about gay rights issues in his New York Times column (usually under the guise of "religious liberty"). On October 16, 2014, Ross Douthat spoke at a fundraiser for the ironically named Alliance Defending Freedom (formerly known as the Alliance Defense Fund), a right-wing legal funding group that supports the criminalization of homosexuality,[14] among other far-right causes.

Douthat later apologized, stating that he was not aware the event was a fundraiser and would not have participated if he had known it was.[15] However, Douthat has yet to repudiate his stance on homosexuality or state that he would not have spoken at a non-fundraiser event for the ADF.

Notwithstanding this stance, he has repeatedly evinced a prurient (and potentially intellectually inconsistent) interest in polyamory. Writing in response to Douthat's most recent Twitter thread on the subject, Deadspin's Albert Burneko mused: "To me there are two possible ways to read this pair of tweets. The first is the more obvious: A flushed, sweaty Ross Douthat, pupils dilated alarmingly, horny for group action, in a characteristically roundabout way inviting the sexy under-35 polyamorists out there to identify themselves and/or leap into his DMs. The second is much more alarming, and concerns the nature of the 'anecdata' that Ross Douthat would like all of the internet to know that he keeps encountering: That Ross Douthat is out here continually batting frenzied polyamorists away from his dick (much like he once had to fend off the drunken 'chunkier Reese Witherspoon' lo these many years ago), and has turned to Twitter to find out whether this is a common occurrence in the world or if he just has a special Kavorka that makes him irresistible to the non-monogamous people of the world."[16][17]