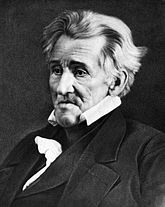 Andrew "Old Hickory" Jackson (1767–1845) was the seventh President of the United States, and the first from the Democratic Party; the Jackass is the mascot of the party to this day. Before the presidency, he was the first (military) governor of Florida. He was the first populist president (not coincidently, he was elected shortly after most states got rid of "property qualifications" for suffrage). Up until that point, they were all hand-picked by aristocracy. Jackson was an orphan and former British captive who rose up to one of the nation's highest political offices; he represented an early version of the American dream.

On race issues, he was complete trash, and because 19th-century governments did not give a crap about non-whites, you got yourself an exercise in creative brutality. His expansionist policies often led to conflicts with Native Americans and men like Davy Crockett who opposed his ideas; the results often ended up bordering on genocide. Despite this, his economic policies as president and trade agreements helped launch the United States into the early stages of the Industrial Revolution.

The best quality in a person was loyalty to Andrew Jackson. John Quincy Adams attempted to establish a meritocracy in government instead of a patronage system; Jackson called him a corrupt closet Federalist, and then appointed only people loyal to him. It took 100 years to reform civil service employment practices. (See Spoils system.) This is called nepotism, and it has recently found its way back into the executive office.

During his Presidency, Jackson oversaw the development of a system that came to be known as "Jacksonian democracy", a populist movement built on a coalition of farmers and urban laborers which was characterized by agrarianism, appeals against "aristocracy" and the "elites", while brushing the issue of slavery under the rug for the time being, and a genuine belief in America's manifest destiny. Credit where credit's due: he oversaw the expansion of universal suffrage (for white males, anyway) and the peak of voter turnout in the US (at about 80% by 1840), supported the abolition of the Electoral College, and recognized how the power of money could corrupt politics and lead to the breakdown of democracy. Historians also credit him with firmly establishing the Presidency's influence in US government; however, most of his successors were relatively weak Presidents until Lincoln. He was also instrumental in advancing the American economy, improving the value of the US dollar, and industrializing the United States in both the public and private sectors. One such example is the funding of the first railroad system, which would begin in the 1830s. As a result, he was directly responsible for bringing the Industrial Revolution to the United States. Under him, bills passed that would allow for more property rights, incentives for the working-class, and lower taxes, which, for the time, was quite beneficial in private industrialization, which, in turn, led to a rapid expansion in U.S. national capital. The irony is that his party was generally against the centralization of executive power that he exercised during his presidency. Because of this, he can easily be compared to Franklin D. Roosevelt, who began shifting the democratic party in a new direction.

Jackson was also highly critical of corporations and feared the growing power of trusts and monopolies. He established strong protectionary government programs and federalized certain services that would benefit ordinary (white male) workers. Jackson limited the power of the banks, which pissed off many wealthy stockholders, but they were pretty much the only ones who legitimately hated him. While he was a champion of capitalistic policies and a free market, he believed that it was problematic, and so, believing everyone (white males) had an equal right to the same economic advantages, he passed equal protection laws to ensure that the country would go in a direction that would allow for what he believed to be a far more egalitarian society. Perhaps his most important act as president was his dismantling of Alexander Hamilton's central banking policy, which was responsible for a great deal of class division early on in the 19th century. He stated that this was his proudest achievement in life. His economic policy, structural reform, support for an egalitarian society, economic nationalism, and hatred of the corrupt banking system sounds a lot like someone else we know.

However, in terms of his social policies, Old Hickory-dickory-dock's Presidency demonstrates how seemingly noble populist beliefs can be taken way too goddamned far. His opposition to financial power and central banking did have some repercussions later on, as he lacked the foresight to see that the next generation of politicians was complete buffoons who would take things too far through poor implementation, therefore setting off a wave of deregulated banking that, combined with his gold-bug monetary policies, culminated in the Panic of 1837

and economic depression that lasted until 1843. (Naturally, it was his successor, Martin Van Buren, who had to deal with the fallout.)[2] He deeply embedded cronyism into the culture of Washington, D.C., overseeing the rise of the spoils system and working around the little logic-buster it presented for his populism and opposition to "financial elites" by claiming that allowing people to buy their way into the halls of power was, in fact, a way to encourage political participation and overturn the entrenched bureaucracy. He was also a strict constructionist who opposed private sector infrastructure projects because it should be the states paying for them, and public education because it would interfere with the role of parents and churches in raising children (sounds like another asshole we all know and hate). He did have his limits on that front, though, as demonstrated by his willingness to go to war with South Carolina over the nullification crisis.

See the main article on this topic: Native American genocides § Trail of Tears

Americans probably best know Jackson today as the man responsible for what is now known as the ethnic cleansing of Native Americans, specifically the Trail of Tears that saw the "Five Civilized Tribes" (the Cherokee, Chickasaw, Choctaw, Creek, and Seminole) deported from Florida, Georgia, Alabama, and Mississippi all the way out to Oklahoma, ignoring land rights and Supreme Court decisions. Consider also that the people relocated by the Trail of Tears had already assimilated into U.S. culture without resistance, and that he personally knew some of them, since he had fought side by side with them in the War of 1812.[3] Additionally, Jackson was the adopted father of a Native American child named Lyncoya Jackson. The federal government had respected their claim up to that point, but Jackson argued that it was illegal for the government to respect those rights.[4]

Tribes were uprooted from "perked" and prime land and sent to less hospitable places. They were whipped and held at gunpoint and sometimes rammed together in wagons to speed up relocation. Mass burials were not uncommon, and since burying a Native was considerably more expensive than a white person, tribes would be required to pay the bill. There are accounts of soldiers who expressed outrage and shame over what happened.[5] Roughly 16,000 Cherokee were removed from their homes, and 4,000 died on the journey.

Jackson believed that the displacement and genocide of Native Americans were justified because a white Aryan race existed in America, which was wiped out by the Natives presently living there. The natives needed to be displaced and destroyed to avenge the ancient white people. As stated in his state of the union address in 1830:[6]

But true philanthropy reconciles the mind to these vicissitudes as it does to the extinction of one generation to make room for another. In the monuments and fortifications of an unknown people, spread over the extensive regions of the West, we behold the memorials of a once powerful race, which was exterminated of has disappeared to make room for the existing savage tribes. Nor is there any thing in this which, upon a comprehensive view of the general interests of the human race, is to be regretted. Philanthropy could not wish to see this continent restored to the condition in which it was found by our forefathers. What good man would prefer a country covered with forests and ranged by a few thousand savages to our extensive Republic, studded with cities, towns, and prosperous farms, embellished with all the improvements which art can devise or industry execute, occupied by more than 12,000,000 happy people, and filled with all the blessings of liberty, civilization, and religion?

This particular conspiracy theory has seen a revival in the 21st century under the name The Solutrean Hypothesis.

Jackson not only kept slaves (the exact number is estimated at just under 200), but traded in them,[7] opposed their eventual emancipation, and was exceptionally cruel to them. Jackson once paid for an "Advertisement for Runaway Slave" that offered $50 for the return of the slave "and ten dollars extra, for every hundred lashes any person will give him."[8] Jackson oversaw the implementation of the "gag rule" that forbade discussion of slavery in Congress.[9]

On his first day in office, Jackson's supporters thoroughly trashed the White House, starting a tradition of sorts.[10] He famously beat an attempted assassin so viciously that he had to be pulled off of him, letting you know the man was undoubtedly batshit. On his last day in office, Jackson lamented that he "had been unable to shoot Henry Clay or to hang John C. Calhoun." While this may seem like a joke, he was likely not attempting humor.[note 1] To top it off, he shot a man in a duel when that man referred to him as a bigamist, which was technically correct. During Jackson's funeral, his pet parrot had to be forcibly removed because it would not stop uttering profanities.[11]

A nation in denial.

The American government nonetheless saw fit to put his portrait on its $20 bill; apparently, because he killed a bunch of British soldiers during the battle of New Orleans in the War of 1812, among a few other things, and got elected. Putting him on the twenty is especially odd considering that Jackson opposed paper money. When a movement arose in the 2010s to place a woman on US currency, the most popular proposal quickly became having her replace Jackson on the $20 (as opposed to Alexander Hamilton on the $10, the original idea) due to his checkered past. Sure enough, it was announced in 2016 that Jackson would be replaced by Harriet Tubman in 2020, although Trump's buffoonery led to a delay in implementation.[12] He's also appeared on thirteen US postage stamps, more than anybody else save for George Washington, Thomas Jefferson, and Benjamin Franklin.

It goes without saying that Jackson's legacy today is a hotly contested and controversial one. From one perspective, historians credit him with breaking down the traditionalism and privilege emerging in the young nation, laying down the foundation for America's classically liberal, laissez-faire society and political culture. From a different viewpoint, they also credit him with ethnic cleansing, policies that were racist even by the standards of his time, a disastrous economic program, and an attitude towards slavery that radicalized both sides of the debate and saw growing problems ignored for future generations to solve. In general, the people who see him the most positively today are those that would have been amongst his political base back in the day - white, mostly male, rural dwellers with little means and often even less education. Urbanites, minorities of any kind, or any person with a college education tend to have a dimmer view of him. Unfortunately, his shtick of playing to poor whitey works even today, as evidenced by Donald Trump.

However, he probably had the most badass last words ever out of any other president. I killed the bank.