Schematic diagram of an HIV.

Acquired Immune Deficiency Syndrome (AIDS) is a collection of opportunistic diseases that almost inevitably lead to death when untreated. AIDS has been conclusively demonstrated to be caused by long-term infection with the Human Immunodeficiency Virus (HIV), except for HIV denialists (who deny that HIV causes AIDS, or that HIV even exists). In short, HIV suppresses the body's defenses against infection, leaving it vulnerable to just about anything that attempts to invade.

According to the Centers for Disease Control's 1993 guidelines,[1][2] AIDS is defined as an HIV infection plus any of the following: 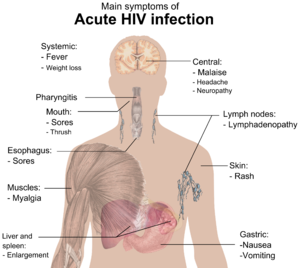 After infection with HIV, the virus quickly replicates in lymphatic tissue and travels through the blood to infect most areas of the body. The largest consequence of this is the "hijacking" of certain immune cells (any that express the protein CD4, which is the target of the viral antigen), especially so-called Helper-T cells, or CD4+ (CD4 positive) cells. The virus capsid contains two proteins, called Reverse Transcriptase and DNA Integrase, along with the viral strand of RNA. Reverse Transcriptase performs reverse transcription on the viral RNA, thus converting it into DNA, and DNA Integrase then "injects" the viral DNA into the host DNA in the cell nucleus.[4] One of the primary methods of control in HIV-positive patients is therefore Reverse Transcriptase Inhibitors (RTIs).[5]

Early in the infection, the immune system holds the infection at bay, often causing "Acute Retroviral Syndrome," a flu-like illness. Patients often have swollen lymph nodes. After approximately 8–10 years of infection, the immune system begins to lose its battle. This is primarily seen in the loss of numbers of CD4+ cells, however the changes are somewhat more complex. When the CD4+ cell level drops low enough, AIDS becomes apparent. The first symptoms of the illness are generally night sweats, weight loss, and oral thrush.

HIV is transmitted by exchange of bodily fluids, especially when direct exposure of the bloodstream is involved. A direct blood transfusion has a well over 90% chance of infection, which is why blood donations are heavily screened and tested. Needle sharing has a relatively lower chance at around .6% per event, however, drug addicts rarely do heroin only once. Likewise, unprotected sexual intercourse has between a .04% (vaginal insertive) and 1.38% (anal receptive)[6][note 1] chance of infection per act, however, people are much more likely to engage in sex on a random day of the week than get a blood transfusion, so sex remains the primary mode of transmission. These chances become almost negligible with proper condom use. Additionally, someone who is "undetectable" (whose viral load is too small to be detected in viral tests) cannot transmit HIV.

The hallmark of AIDS is the appearance of opportunistic infections, meaning infections with organisms that do not usually cause human disease, unless given the right "opportunity". This opportunity is the reduction in cell-mediated immunity, first seen in patients with certain cancers or on anti-rejection drugs for organ transplantation.

Based on genetic analysis, the origin of the virus has been traced to a single transmission of chimpanzee to human in 1920 in what was then Leopoldville, Belgian Congo (now called Kinshasa, Democratic Republic of the Congo);[8] most likely the chimpanzee came from neighboring Cameroon as part of the bush-meat trade. The illness was first recognized in the early 1980s in the US[9] as gay men presented to their doctors with a rare lung disease called Pneumocystis carinii pneumonia (PCP).[10] Early on, the "gay disease" took on a variety of names, including "gay cancer" and "Gay-related immune deficiency" (GRID). The CDC noticed an increase in requests for drugs needed to treat this illness and launched an epidemiological investigation.

Randy Shilts in his book And the Band Played On: Politics, People, and the AIDS Epidemic identified Air Canada flight attendant Gaëtan Dugas as "Patient Zero", the first person to contract HIV and spread AIDS in the US,[11] but this has been refuted by a new epidemiologic analysis; HIV arrival in the US preceded Dugas by a few years and arrived from Africa via Haiti.[12][13] The earliest likely person to have died from AIDS in the US was a 16-year-old in 1969.[14] Dugas was likely erroneously identified as patient zero because 1) he was a relatively early disease carrier in the US 2) he had over 2500 sex partners by his own admission, and 3) he had an unusual name that his sex partners were more likely to remember.[15]

Social and political responses to the AIDS epidemic of the 1980s have included the "safe sex" movement, with demands for greater availability of contraception, greater awareness of the risks of unprotected sex, and more comprehensive sex education. Sadly, however, the fact of the matter was that Ronald Reagan refused to mention AIDS on television until the disease had spread so widely that it was no longer just an American but global pandemic. Reports from the CDC going back to 1980 were alerting the government of the numbers of infections and what that meant, but queers, dopers, and Haitian refugees can fuck themselves. Only when celebrity Rock Hudson[16] turned into a walking skeleton before everyone's eyes did the Gipper catch the drift. Hell of a job.

The movements for safe sex and comprehensive sex education have been met with continuing resistance from conservatives, who see them as implying approval of promiscuous lifestyles and hence contributing to "moral decline." (Apparently saving lives is moral decline.)

See the main article on this topic: Quack HIV/AIDS treatments

There is no cure or vaccine for AIDS as of present time (though one drug used to treat HIV is also effective as a prophylactic against HIV infection when taken regularly: tenofovir disoproxil/emtricitabine in combination, commercially known as Truvada).[17] Thus, unsurprisingly, there has grown a field of quack medical treatments purporting to treat AIDS. These treatments are ineffective and range from the harmless but worthless to potentially deadly.

Since AIDS initially appeared to be impacting only the gay community, some religious fundamentalist groups, proclaimed that the disease was a divine retribution for homosexuality, or for promiscuity and moral decline. Analogies were made to Sodom and Gomorrah, and semi-Biblical slogans such as "if you live by the flesh, you will die by the flesh" were coined; and of course references were made to Biblical predictions that plagues would mark the beginning of the apocalypse.

These ideas have lost weight[note 2] among most religious groups, although one study suggests that 23% of Americans still think AIDS is God's punishment for… well, something.[19] Global statistics of religious propaganda and belief based on AIDS being "retribution from God(s) for act XYZ" are unknown, as of present times. A few obnoxious extremists who have still clung to the punishment idea included Pat Robertson, the late Fred Phelps and the late Jerry Falwell. Placards held by members of Phelps' Westboro Baptist church in their homophobic picketing activities regularly include slogans such as "Thank God for AIDS." (Well, sure, if you wanted to portray your God as one of peace…)

Considering that first responders to accidents, babies born to infected mothers, or faithful wives/husbands infected by their partners all have exposure to AIDS, it is difficult to see what these innocent people have done to gain God's Wrath. Only Jehovah's Witnesses may perhaps imagine those who got the disease from blood transfusions are at fault. But we'll take schadenfreude at the fact that one of the most important Christian rock records was actually about AIDS.[20]

Many other myths and superstitions have grown up surrounding AIDS, including the belief that the disease originated from a man having sex with a monkey or (non-human) ape, and contracting a simian disease from it. In societies with a poor education or awareness of AIDS, or a high level of prejudice, sufferers are often ostracised in the false belief that any kind of contact could spread the disease. In sub-Saharan Africa, the belief, known as virgin cleansing myth, is widespread that sex with a virgin will cure AIDS. This has had… unpleasant results.[21]