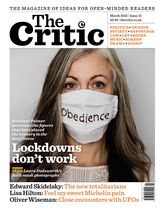 The Critic: the anti-lockdwon issue for the COVID pandemic
Not to be confused with the The Critic

, an animated sitcom from the 90s.

The Critic is a British right-wing culture war magazine, dedicated to offering self-described "critical voices" to the mainstream "consensus of virtue" that it claims rules the UK.[1] It was launched in 2019, funded by wealthy financier Jeremy Hosking, who afterwards established the Reclaim Party with Laurence Fox.[2] While it claims to be non-partisan, it has close links to the British right, with its editor Christopher Montgomery formerly working for a Conservative Party fringe group and the Democratic Unionist Party.[3][2]

Supposedly its purpose is to challenge closed minds in universities, the civil service, the BBC, and other public bodies.[2] Its chief method is to publish the same sort of boring, petty articles found in every other right-wing newspaper, magazine, and blog.

It arose from another right-wing magazine, Standpoint, which was funded via the Social Affairs Unit (an offshoot of the Institute of Economic Affairs), and took a neoconservative and anti-Muslim line. When one of its major backers stopped giving money, it looked to other sources and found Jeremy Hosking, despite the fact that he was more interested in Brexit than the Middle East. However by that point Standpoint was in decline and riven by factionalism, made worse by debates over its change of direction, and Hosking and most of its staff gave up and decided to found a new magazine instead.[4]

So the key backer behind The Critic is Jeremy Hosking, also a big donor to Laurence Fox and Fox's Reclaim Party.[2][5] Hosking had previously had donated £1.5 million to Vote Leave for the 2016 Brexit referendum, £350,000 to Conservative Party candidates in 2017, and £200,000 to Nigel Farage's Brexit Party.[6]

The editor as of 2021 is Christopher Montgomery, with contributing editors Daniel Johnson, Roger Kimball, and Toby Young.[7]

Montgomery had previously worked for the European Research Group, a right-wing and eurosceptic group of Conservative MPs (whose most prominent member was probably Jacob Rees-Mogg), and before that he was Chief of Staff for the Democratic Unionist Party, the more insane and theocratic of Northern Ireland's main Unionist parties.[3] Not a CV that immediately says "iconoclastic free thinker".

Roger Kimball, another contributing editor, is a well-known American conservative writer, editor of The New Criterion, author of Tenured Radicals: How Politics Has Corrupted Higher Education, and also involved with various international versions of The Spectator.

It features articles by many familiar faces:

It is very fond of Roger Scruton, the deceased conservative philosopher known for racist and homophobic views, particularly in his capacity as editor of the Salisbury Review.[15] It has published numerous articles on Scruton covering everything from his views on Wagner to his taste in wine.[16][17]

Most of its content is published under the section title "Artillery Row", because they like shooting things.

Prospect editor David Goodhart commented "Does the world need another magazine of tastefully written… conservatively inclined thinking? Probably not." Peter Wilby of the New Stateman replied: "I would say probably yes, so why do we never get one?".[2] Miao!

Claire Alleaume on Medium noted that the "under-represented" it claimed to stand up for were actually the privileged likes of Toby Young and Dominic Green, and she defended centrism against the glib cries of the extremes such as the Critic, saying:

Being sensationalist and polarising is easy, as a decade of social media pushing opinions to the extremes has shown us. The real hard work lies with those brave enough to sometimes sit on the fence – painful backsides notwithstanding.[18]

Regardless of whether centrism is really a dangerous position, Alleaume is certainly correct about the laziness of the Critic's project.