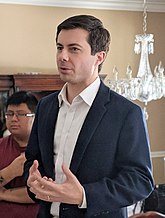 Pete Buttigieg, also known as Mayor Pete, (1982–) is the former mayor of South Bend, Indiana.[note 1][1] He ran a failed campaign for the 2020 U.S. presidency on the Democratic ticket.[2] He announced his campaign for President on January 23, 2019,[3] and dropped out on March 1st, 2020.[4] His consolation prize was being made Secretary of Transportation under the Biden administration.

Buttigieg is openly gay and married.[5] He is a Rhodes Scholar, and winner of the 2000 John F. Kennedy Profile in Courage Award, for an essay on Bernie Sanders.[6] He was a Navy lieutenant,[7] and Afghanistan War veteran.[8] He is usually seen as a centrist. His campaign was often mocked for its failure to reach black voters, and this ultimately sealed his fate once the primary season got to more diverse states like Nevada and South Carolina despite good showings in the initial few contests.