In the history of the United States, court-packing was a political epithet used to describe a 1937 plan by President Franklin Delano Roosevelt to increase the number of justices sitting on the United States Supreme Court from 9 to 15.[1] The proposal was perceived as a power grab by FDR; since the Supreme Court had struck down key pieces of his legislative program, he would fill the Court with his own loyal appointees and outvote the existing majority. It was not necessarily unprecedented when he proposed it-the original supreme court had six justices, and changing that number for political reasons happened multiple times in the 19th century. Our current number was only established in 1869. 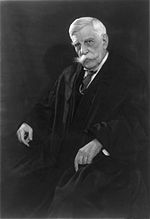 Justice Oliver Wendell Holmes, Jr., 1930. Please tell me these robes don't make me look creepy, or do they?

A series of Progressive Era cases before the U.S. Supreme Court brought the authority of state and federal governments to impose economic regulations into question. Cases such as Lochner v. New York[2] had held that elements of economic libertarianism were enshrined as constitutional principles that no government could violate. The Lochner court actually believed that "substantive due process" arising out of the Fourteenth Amendment protected a "liberty to contract" to the point that that New York state legislation that forbade bakers from working more than 10 hours a day or 60 a week was an "unreasonable, unnecessary and arbitrary interference with the right and liberty of the individual to contract."

During the Great Depression, and the U.S. response that took the form of the New Deal, this line of precedent caused concern. In 1935, the Supreme Court held the New Deal's National Recovery Act unconstitutional in its entirety, in Schechter Poultry Corp. v. United States[3] (they were right on this one as the NRA was one of the less viable parts of the New Deal). Roosevelt's court packing plan was made in response to these and similar decisions invalidating New Deal legislation, and was unveiled in February of 1937.

After the plan was announced, the Supreme Court changed its tune and became more amenable to upholding economic regulations. In March of 1937, the Court decided West Coast Hotel Co. v. Parrish and before minimum wage legislation was about to be struck down, one conservative justice switched position and voted to uphold the law in question,[4] in a change of direction that was called the "switch in time that saved nine." After this and several similar decisions, Congressional support for Roosevelt's packing plan collapsed. Eventually, in cases like United States v. Carolene Products Company,[5] the U.S. Supreme Court gave legislators the ability to impose economic regulations, and SCOTUS scrutiny of such matters grew more minimal. Nevertheless, FDR's court packing plan is badly remembered as a proposal that threatened the independence of the judiciary, a threat that proved successful.

Some years later, some Republicans charged President Barack Obama with "court packing" for attempting to fill existing vacant judgeships, especially in the DC Circuit Court of Appeals that handles claims against the United States.[6][7][8] Unlike FDR's court-packing plan, Obama had not sought to add judges to any court, nor were his appointments being made under any sanction other than the fact that the President gets to appoint judges to vacant seats under the U.S. Constitution.[9] This has happened since time immemorial (or at least since the Constitution was ratified). As of 2016, this practice has been suspended in favor of the opposition party blocking the president's choices until a president of their own party can be elected.

Because of this, Senate Democrats had to enact a rule change in late 2013, curbing the minority party in the chamber's ability to filibuster (excluding Supreme Court nominees and actual legislation, obviously) after a record 17 judicial appointments and 59 executive positions (including at NASA, NOAA, the EPA and NSF[10]) were being blocked by the GOP for no good reason.[11][12]

After losing the election, and having a Republican state Supreme Court candidate lose an election in 2016, Governor Pat McCrory of North Carolina initially decided to add two Supreme Court seats by appointment (the state's judges are normally elected), with the stated purpose of handling property damage claims from Hurricane Matthew, but with an actual purpose of maintaining conservative control of the judicial branch of government.[13] McCrory later changed his mind.[14]

After liberal justice Ruth Bader Ginsburg died in 2020, while Trump was still in office, a number of progressives revived the idea, on the grounds that Trump would just appoint a third reactionary justice who would threaten things like Roe v. Wade (thus making drastic action necessary). For somebody who lost the popular vote and only served one term, he had a lot of influence on the judiciary which some on the left saw as unjust. It proved controversial even in Democratic circles, and was scrapped even after they narrowly won in 2020 as certain key swing votes wouldn't support it.

This politics-related article is a stub.
You can help RationalWiki by expanding it.