From RationalWiki
Jump to navigation Jump to search
Not to be confused with the Reformed Political Party. 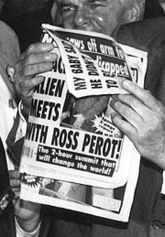 The scoop from the Weekly World News

The Reform Party in the United States is a political party founded in 1995 by billionaire two-time presidential candidate H. Ross Perot with no discernible ideology other than H. Ross Perot fandom. Perot had already run for president in 1992 as an independent and won 19% of the popular vote, the highest for a third party or independent candidate since Theodore Roosevelt in 1912. He parlayed that showing into a new political party. The Reform Party platform consisted entirely of side issues which "could be either liberal or conservative," like term limits, campaign finance reform, ending deficit spending and paying down the national debt, and opposition to NAFTA. Their ideology is sometimes called "producerist".

Since the Reform Party deliberately did not take any position on social issues like abortion and gay rights, nor on any economic theory beyond vague intention to pay down the national debt and save American jobs, they proved to be a magnet for a lot of serious and kook candidates alike using them as a ticket of convenience. Needless to say, this party imploded once you got all these people together in the same room and whenever Perot, the only thing holding them together, left the room. The first split happened in 1996: after months of Perot publicly disclaiming any interest in the party's nomination and stating his wish that a qualified candidate runs, former Democratic governor of Colorado Richard Lamm announced his candidacy. Shortly after that announcement, Perot entered the race and easily won the nomination based on name recognition and (allegedly) ballot manipulation, leading to charges by Lamm supporters that Perot had always intended to run and merely goaded Lamm into running so it would appear a legitimate primary race (a disgusted Lamm refused to endorse Perot afterward). In short, many of the new party's members came to believe that Perot was less interested in building a legitimate party than a platform for his own ego.

For a time in the late 1990s, it appeared the Reform Party had the potential to emerge as a third major party of the center, especially when Jesse Ventura was elected governor of Minnesota in 1998. Instead, after Ventura's election, the party began to fall apart. The Reform Party was, however, in many ways a precursor of as well as a product of emerging trends in politics: Jesse Ventura's upset election in Minnesota on the Reform Party ticket is often cited as the first political victory driven by grassroots activity on the Internet; Ross Perot's campaigns, driven by talk radio. Part of the reason the Reform Party became irrelevant is that the two major parties were belatedly learning to use (and manipulate) these new tools to their advantage.

The myriad factions and ego-clashes involved are complicated. They go something like this: some former Lamm supporters, already soured on Perot, left in 1997 to start the splinter "American Reform Party." Marxist Social Therapy advocates Fred Newman and Lenora Fulani disbanded their New Alliance Party and joined the Reform Party en masse, effectively giving them control of the New York chapter, meaning anyone seeking Reform Party support or their ballot line in New York would have to appease Newman and Fulani. Jesse Ventura fell out with Perot not long after being elected governor, and the Minnesota branch of the party left to become the Independence Party. Party chair Jack Gargan (of Florida, up to that point a Perot supporter) sided with Ventura and left.

Meanwhile, the prospect of $12 million in federal matching funds for the upcoming 2000 presidential contest prompted perennial right-wing candidate Patrick Buchanan to leave the Republican Party and seek the 2000 Reform Party nomination. John Hagelin, the perennial candidate of the Transcendental Meditation-promoting Natural Law Party, also announced he was seeking the Reform Party nomination. Perot announced he wasn't running, leaving the existing Reform Party members to choose between two distasteful fringe candidates. At first, Perot backed Buchanan. In a bizarre move, the leftist Fulani and Newman supported Buchanan. Large numbers of religious right kooks, anti-abortion nuts, and their ilk joined the Reform Party to support Buchanan, and the Reform Party platform took a lurch to the hard right under their influence. Much of the rank and file of the party, seeing the entry of the Buchananites as a hostile takeover, threw their support to "yogic flying" guru John Hagelin as their only realistic chance of stopping Buchanan (the obvious compromise candidate Ventura, perhaps realizing the Reform Party was a sinking ship, flatly refused to get involved). Perot fell out with Buchanan at some point, or simply got fed up with the Buchananite takeover, and announced his opposition to Buchanan and his endorsement of Republican candidate George W. Bush (in a Larry King Live appearance where he stated there was no point in voting for a candidate with no chance to win, which had the effect of insulting, intentionally or not, the millions who had voted for him in 1996 -- the reliably boot-licking King didn't challenge Perot on this point), effectively announcing he was finished with the Reform Party. Perot's 1996 running mate, antiglobalization activist Pat Choate, continued to support Buchanan, leading to a Perot-Choate spat. Newman and Fulani switched their allegiance to Hagelin after the inevitable "irreparable differences" with Buchanan emerged over abortion and gay rights (why they didn't see this coming...)

The 2000 convention itself? Well, let's just say it was a heap big mess with walkouts, lawsuits, charges, countercharges, counterwalkouts, floor fights, fistfights, and 8 by 10 glossy color photos with circles and arrows and a paragraph on the back of each one, culminating with two separate but simultaneous "Reform Party Conventions," one nominating Buchanan and the other (meeting in a theater across the street) nominating Hagelin. Anyhow, Pat Buchanan emerged as the FEC-sanctioned Reform Party nominee and got the $12 million. Yet when the general election rolled around, Buchanan only won 0.43% of the popular vote (or 0.06% more than Libertarian Harry Browne, who had maybe 1/10 of Buchanan's campaign budget). Many most of his right-wing supporters had deserted him to support George W. Bush (cynics suggest a few reasons: one of them was the whole Buchanan debacle may have been engineered by conservative pressure groups whose allegiance was to the Republican Party and wanted to destroy the Reform Party using Buchanan as an unwitting tool; another cynical suspicion is that most of Buchanan's supporters deserted him due to rank racism and sexism after he chose Ezola Foster, an African-American woman, as his running mate). As for the party's longtime rank and file members, they mostly gave up in disgust and cast more votes for Green Party candidate Ralph Nader in 2000 than for their own party's candidate. Nader's platform - with things like campaign finance reform and antiglobalization - was probably closer to most of their views than Buchanan's anyhow.

The party itself has acknowledged that around 2000, it was taken over by far-rightists based around David Duke, but they insist that's all over now.[1] In 2004, the Reform Party - all 7 or 8 remaining state chapters at least - endorsed Ralph Nader's independent campaign rather than run their own candidate.[2] For a while in the 2000s, the Reform Party split into two factions, each claiming to be the "real" Reform Party, while a few of the state Independence Parties tried forming a national Independence Party to no avail. In 2008, the Reform Party nominated octogenarian Ted Weill (who had expressed interest in running again in 2012, except he sort of died in 2009), and in 2012 Andre Barnett as their presidential candidates. No, we've never heard of them either.

In December 2015, they announced a rainbow of prospective candidates for the 2016 Presidential elections. These include former chemical engineer Ed Chlapowski, semi-retired engineer Kenneth Cross, and clinical psychologist and executive consultant Lynn Kahn. The party has a dream of drafting Jim Webb, who was briefly a Democratic presidential candidate for the 2016 election and under-secretary for veterans' affairs in Reagan's White House.[3] The nation waits with interest.