From RationalWiki
(Redirected from ELF)
Jump to navigation Jump to search

ELF redirects here. If you came here to read about elves, see elf. For people who think they are elves, see otherkin. For Ronnie James Dio's former band, see heavy metal music. For elf bowling, see Santa Claus. For the hard green group, see Earth Liberation Front. For any of the other myriad uses, go to wikipedia

(But come back soon!) 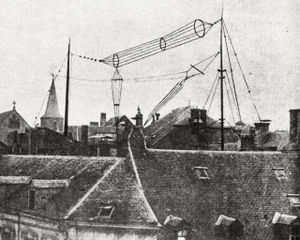 Invisible waves coming out of a radio antenna -- it's Witchcraft!

Extremely low frequency (ELF) waves are radio waves with frequencies from 3 Hz to 3 kHz. Because they easily propagate through fluids such as the ocean, they've been used for submarine communications.[1] They're also a favorite target of cranks and conspiracy theorists who claim they're being used for all sorts of nasty things like mind control. Since the Schumann Resonance lies within the ELF frequency range, weather control is also attributed to ELF.[note 1] And, since HAARP is capable of creating ELF waves in the Earth's ionosphere, it's usually blamed for everything from bad hair days to earthquakes.[2]

Many ELF conspiracies centre around fantasies about Nikola Tesla, since he popularised the concept in his attempts to create wireless energy by pumping large amounts of ELF into the ionosphere.

According to Tesla folklore, he was supposedly working on some great breakthrough discovery or invention before he died, which has been kept secret ever since. In some variants, it's a "death ray". In others, some form of paranormal or extraterrestrial communication.

Tesla's ideas turned out to be impractical, but his status as a crank martyr has led the conspiracy-minded to postulate that one of his fabled breakthrough devices was a way to blanket the world with ELF, which has been secretly employed by evil governments to control the minds of citizens.[3]

Cranks proclaim (rather loudly) that ELF can control minds because the "alpha waves" of the brain cycle are within the ELF range. But if you seek a reality-based explanation for exactly how ELF generators could use this fact to control thoughts, they have no answer, just lots of technobabble that any first year physics student would find loaded with fundamental errors and misrepresentations.[4]

Michael Persinger and his God helmet experiments are sometimes invoked as proof that ELF electromagnetic energy fields can be used to “influence” the brain,[5] however it's more likely that suggestibility of participants, improper blinding of participants, or idiosyncratic methodology "influenced" the experiment's results. Replication attempts published in a pseudojournal claim success, while those published in scientific literature report failure.[6]

According to very paranoid thinkers, the grand Project Blue Beam conspiracy -- whose objective is supposedly the total subjugation of mankind -- somehow uses UHF, LF, VLF, and ELF (and maybe AM and FM too) to produce voices in your head that make you obey the NWO.[7]

ELF conspiracy proponents often cite U.S. Patents with scary-sounding (to them) titles like "BODY WORN ACTIVE AND PASSIVE TRACKING DEVICE" and "FENCELESS ANIMAL CONTROL SYSTEM USING GPS" as proof that ELF has been weaponized as a tool to subdue the population.[8] However even a cursory read of the patents cited shows that none of them operates in the ELF range of frequencies.

So-called targeted Individuals also blame ELF for a host of imagined problems including violent behavior, cramps, seizures, voices, and induced dreams, which they claim are somehow simultaneously caused by microwaves [9], because of course, as we all know, sum-difference frequency synthesis with radio-waves is impossible.

It's fair to say that most people had never heard of ELF until 34 year-old Aaron Alexis, aka the "Navy Yard Shooter", killed 12 people at the Washington Navy Yard in 2013 using a shotgun with "My ELF weapon" carved into the stock. Alexis, who struggled with mental health issues, had previously told police he was hearing voices, and that “some sort of microwave machine” was sending vibrations into his body to prevent him from sleeping.[10] Following the shooting, an examination of Alexis's thumb drives, phones and computers turned up the message, "Ultra low frequency attack is what I've been subject to for the last 3 months, and to be perfectly honest, that is what has driven me to this."[11] Inhabitants of the crankosphere such as TruthStreamMedia were quick to suggest that this was proof Alexis was a targeted individual and ELF was somehow employed to make him commit the mass killing.[12]

ELF is all the way at the bottom of the radio spectrum. You can see it in the chart below, highlighted in bright red. By comparison, microwaves are located way up in the UHF portion of the spectrum, highlighted in a kind of dull salmon color. Why anyone would think ELF and UHF (aka microwaves) are the same thing is silly, but they do. Mind control conspiracy theorists have very dumb ideas about the electromagnetic spectrum, most all of them wrong. [13] For example, they believe sum-difference frequency synthesis is possible with radio-waves.

Antennas that will transmit ELF are so huge as to be impractical. The size of a radio antenna must be some physical fraction of the radio frequency's "wave length". For example, let's say the wavelength of a two-way radio used in a modern day police car operates on 600MHz. The size of a wavelength at 600 MHz is 0.5 meters (or a little over 19 inches). So a half-size (9 or so inches) antenna [note 2] will work quite well.[14] But a single wavelength in the ELF frequency range (for example 75 hertz) is 2,500 miles long. To generate ELF waves would require an antenna many hundreds of miles in length.[1] So if someone on Facebook tells you your local cell phone towers are generating ELF waves, you can confidently call bullshit, because as we have already said, sum-difference frequency synthesis is impossible with radio-waves.

Cranks (even ones visiting our Talk pages) will often argue that super secret, black budget military research programs have undoubtedly overcome any practical limitations and "it is not known what present day technology allows for".[15] Which is kind of like saying, "this is true because there is no proof that it's false".

From 1989 to 2004, the US Navy used two 14 mile long antennas connected by 165 miles of cable, to communicate with submarines using ELF. The Soviet Navy developed a similar system.[16] However the resulting emissions were surprisingly weak. It took very sensitive gear and sophisticated antennas for submarines to receive these radio signals. Hence, no human was in danger of harmful radiation unless they were literally humping the transmitting antenna wire.[note 3]

The Navy needed to communicate with their subs using ELF, but the huge antennas required were costly and impractical. To solve this problem, they theorized that HAARP could create a "virtual ELF antenna" way up in the ionosphere.[17] It did this by heating a specific spot in the lower ionosphere with a powerful beam of shortwave radio signals. The signals were cleverly modulated at an ELF frequency, resulting in modulation of the natural auroral electrojet current, which in turn radiated at an ELF frequency.[18] The ELF waves generated by HAARP were still weak enough that submarines would need some sensitive equipment to detect them. So unless a person was actually floating around in the ionosphere — at 100 km (more than 62 miles high) — at the specific spot HAARP was heating, they were in no danger. [19]

Because the AC current carried by electric power lines (aka "mains") alternates at 60 Hz and the lines themselves can be hundreds of miles long, they can function as efficient radiators of ELF. The magnetic fields directly underneath power lines are constantly measured, and they average about 20 µT (microTesla) in strength. However 20 µT is no where near strong enough to cause adverse health effects. In 2007, the World Health Organization (WHO) conducted a study that concluded there are no substantive health issues related to ELF electric fields at levels generally encountered by members of the public.[20] (Of course, cranks have a whole separate conspiracy theory about the WHO.)

Lightning strikes generate substantial ELF waves that can be measured all the way around the world. Needless to say, this has been going on since the dawn of time, and nobody seems too worried about it.[21]

The VLF range of frequencies starts where ELF leaves off. It covers 3 kHz (three thousand hertz) to 30 kHz (thirty thousand hertz). VLF use began in the early 1900s with powerful transmitting stations, such as the one in Varberg, Sweden, first used for transatlantic radio telegraphy in 1922.[22] VLF has also been used for submarine communications, time signals, and navigation beacons.

Since VLF wavelengths are relatively shorter than those found in ELF, transmitting antennas do not have to be hundreds of miles long, they can span just a couple of miles. A number of ham radio operators regularly communicate and experiment with VLF (and other supposedly dangerous "mind control" frequencies).[23]

All this is to say, VLF is not something to be afraid of. However, within the kookosphere, VLF gets lumped in with conspiracy nonsense about HAARP and its supposed ability to do stuff like transmit destructive energy directly into your tooth fillings.[24]

Recently, NASA probes found that VLF radio transmissions from Earth had made small changes over time to the Van Allen Belt, a layer of charged particles held in place by Earth’s magnetic fields. It appears that man-made VLF energy has helped keep damaging radiation from reaching closer to the Earth and disrupting things like satellite communications. NASA referred to the effect as a protective "VLF bubble". [25]

Naturally, cranks have interpreted this as evidence of the NWO's "military engineering of the entire planet" and/or "purposefully accelerating the Schumann frequency (7.83 Hz) to make us sick and drive us all insane while spraying us with heavy metals, toxins and cancer viruses".[26]