From RationalWiki
(Redirected from Faithful)
Jump to navigation Jump to search 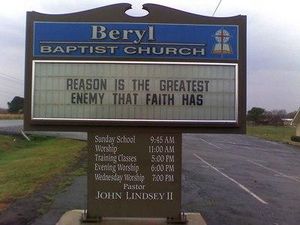 This is an actual photograph (taken by PZ Myers), the quote is from Martin Luther.[1]

In broad terms, faith is just complete trust or confidence in someone or something. This can apply to many things, from romantic and business relationships to religious belief.

In a nonreligious context, to have faith in something is to believe that some idea is true. A person may have faith because of evidence for said idea or regardless of the evidence about said belief. If faith is taken to mean "without proof", many things are taken on faith — because strong, formal proof is really only applicable to mathematics.

In a religious context, to have faith is to believe that a god or a set of gods exist(s) and/or that the doctrines of a religion are correct. Again, a person may have faith because of evidence for said idea or regardless of the evidence about said belief.

Sometimes "have a little faith" is essentially saying "don't be so pessimistic", which may or may not be justified depending on the situation. "Faith in oneself", for example, could be defined as having a rational trust in one's abilities, without unjustifiably assuming they are useless. The key point is justification: when we exhort someone to "have faith in yourself", we do it because we believe there is good evidence they can trust, not in spite of there being none.

"The Parable of the Blind Leading the Blind" by Pieter Bruegel the Elder (1568), as inspired by Matthew 15:14

"Blind faith" is a pejorative term that describes an assertion with insufficient evidence. Often, there is no difference between "faith" and "blind faith". Because faith is based upon a hope or trust that something is true despite a lack of evidence or proof, the use of "blind" is redundant, as it doesn't actually change this definition, but instead tries to bring to the fore all the negative connotations of someone believing regardless of what they can see and experience. Because of this, faith becomes absolute, uncritical, and unchanging, and therefore the opposite of open minded. In the end, blind faith means that one is, well, blind.

Informed faith involves accepting the probable truth of statements that are based on information one does not have full access to, in situations where one does have access to a reasonable amount of supporting evidence.

In areas of science, informed faith often means trusting that researchers have built on the same systems of experimentation and exploration that one has explored personally. Additionally, the correct functioning of technological[4] systems[5] that depend on certain explanations can provide the layperson with an underpinning for informed faith.

Religious fundamentalists may hold the ideal of an absolute, blind, all-conquering faith — at least in whatever they see as their own fundamentals. But in practice, aspiring faith-practitioners recognize grades of faithiness — one's faith should be strong, but for waverers we have techniques of strengthening faith (pray, read more (approved) scripture, hang out with the elect crowd). Fundies can almost relate to the deluded heretic or to the militant atheist, whom they can interpret as having a firm faith, even if that faith advocates the wrong doctrine. But most annoying of all in a faith-oriented worldview is the weak-kneed fence-sitting agnostic, who may accept some ideas provisionally if they seem to work out in practice, but evidently yet lacks the human moral fiber to commit wholeheartedly to any One True Faith.

One way of defining "faith" is the propensity in some people, particularly religious people, to believe what they want to be true, actually is true. Which is another way of saying that some people decide what they believe first, then look for evidence and argument to support the belief first obtained. Faith can be said to be the opposite of the scientific method, in that sense.

The word "faith" carries many positive implications of trust and loyalty, but in normal life it's not taken to be an unbeatable virtue. Every (fully mature, mentally healthy) person has a limit to their trust and their loyalty. We warn children against untrustworthy people precisely because they don't know when it's appropriate to trust/have faith and when not to. We don't encourage them to believe that jumping out of trees wearing superman costumes is a good idea. Praising unquestioning faith - or unquestioning loyalty - in anything is objectively dangerous. Even in a traditionalist, hidebound society, normally the only entities who are upheld as deserving unquestioning loyalty are the highest authority figures and prestige institutions, not just ordinary people. And even in those cases it's not in any sense justifiable. The problem is that people who claim that faith is a virtue in itself always want to make exceptions for things that it's not okay to have faith in — a Christian fundy is unlikely to praise devotion to Osama bin Laden, for example.

Sometimes, when a religious believer has their beliefs questioned so intensely that they, too, have doubt, they turn to faith. For example, creationists often abuse the fact that most believers have faith:

This makes faith into a stopgap measure -- something to plug the holes in your beliefs, until you can find an adequate substitute. While this isn't necessarily problematic in the very short run (sometimes people haven't fully researched an issue, and genuinely will find support for their beliefs), the problem with this line of reasoning is that it doesn't rely on evidence. It essentially says, "I'm going to wait here, without changing my viewpoint, until something that supports my viewpoint comes along". This is almost the definition of confirmation bias!

In particular, this is a problem for creationism, because creationism would require such a drastic turnaround of what science says.

Perhaps another kind of faith[edit]

Faith as expressed by the Romans in the term fides does not have connotations of "faith"/"steadfast belief" as we know today. Rather, Latin fides translates best to "duty", "loyalty", "faithfulness" or "fidelity". Greek and Roman pagans honored (not actually worshipped) their gods as a duty to which they were bound as a people. Romans and Greeks kept shrines to minor deities in their homes as a duty and as a way of honoring their ancestors. By honoring a deity they were paying honor to their ancestors, and society saw this as a duty. The patricians and aristocracy may have offered sacrifice or pinches of incense to the deities on feast-days not as in a practices of a religion but by the practice of a cult (cultus = culture, heritage, society), thus fulfilling a duty to which the class was bound. The only group which had "religion" as such was the military.

Faith within the context of history[edit]

Popular simplifications of history may see an "Age of Faith" as a priest-ridden and superstitious "Dark Age".[8]