The Family Foundation is an organization that has been called "the gatekeeper to Virginia's conservative coalition." It was founded in 1985 by conservative political activists Walter Barbee and Anne Kincaid.[1] The foundation is affiliated with Focus on the Family.[2]

The organization is led by Victoria Cobb. Roger Pogge, the husband of former Virginia delegate Brenda Pogge, is the Foundation's Ministry Relations Coordinator.[4][5]

Victoria Cobb is the leader of the Family Foundation, the only job she has ever held. She acknowledges that, while she is against same-sex marriage, heterosexual marriage has become a disaster as well, and she describes single moms as "heroic". She claims that many people oppose abortion based on science rather than faith.[6] She claims that the political left has tried to silence her as part of a war on women, and that one-third of women who get abortions do so because they've been coerced by physical threats or by the threat of withdrawal of financial resources.[7]

She was accused of having a conflict of interest, given that she was an anti-abortion activist and her husband Matt Cobb was deputy secretary of Health and Human Resources in Virginia,[8] helping lead the office in charge of interpreting abortion regulations.[9]

She said, "Science has not found a genetic link to homosexuality. Even with the completed genome project, no evidence was found to suggest it is connected with one's DNA. I think those that have stepped away from their lifestyle as a gay individual and are now married with children would tell you that they made a choice.”[10]

In 2019, Cobb successfully lobbied a subcommittee of the Virginia state legislature to prevent passage of the Equal Rights Amendment.[11] 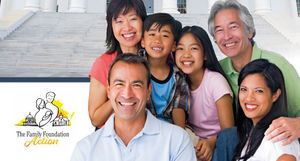 The foundation wants to bust abortion clinics for health and safety violations, cut funding for abortion, take away the right of terminally ill patients to choose euthanasia, reward women who choose to take unplanned pregnancies to term, and increase access to adoption. With regard to marriage, the Family Foundation wants to make it harder to obtain a no-fault divorce and allow discrimination based on sexual orientation and gender identity.

The foundation was a strong proponent of parental consent for abortion, mandatory invasive ultrasound for women seeking abortions, having the state sell "choose life" vanity license plates, requiring a moment of silence in schools, and having the state post the motto "In God We Trust", outlawing riverboat gambling, and outlawing gambling at Internet cafes, all of which became part of legislation that was ultimately enacted.

They view transgender surgery as elective and therefore not medically necessary.[12]

In 2008, the Family Foundation described a federal appellate court ruling barring police chaplains from praying in Jesus's name as "anti-Christian hysteria".[14] In 2009, the foundation unveiled their “Rediscovering God in America” conference where Lou Engle laid his hands upon Newt Gingrich and beseeched God to extend his “influence for righteousness in this nation, lay your supernatural hand of God upon him and deliver him from the evil schemes of the enemy.”[15]